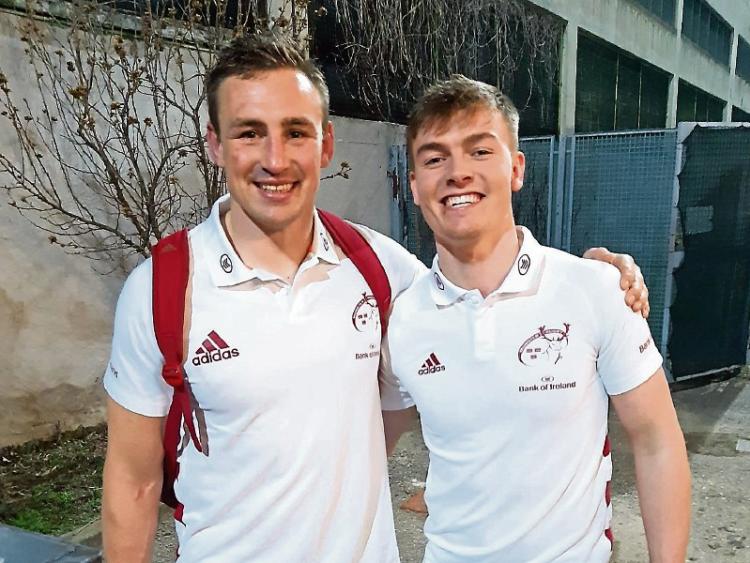 Academy outhalf Jake Flannery made his senior debut for the Munster rugby team last weekend in their bonus point win over Zebre in the Guinness PRO14 game in Milan.

The Bansha player was introduced five minutes from the end of the 28-0 win, after he received a late call-up to the squad when Shane Daly pulled up in the warm-up and Darren Sweetnam made a starting return in his place.

Flannery, who replaced Sweetnam in the 75th minute, was one of two Tipperary players to feature in the game; Cahir’s Tommy O’Donnell returned from injury and was brought on for Arno Botha in the 64th minute.

The Italians played with 14 men for 70 minutes after Pierre Bruno was sent off for leading with an elbow as he carried into contact with Chris Cloete.

As a result of the win Munster remain second in Conference B of the Guinness PRO14, and they entertain Scarlets at Thomond Park at 5pm this Saturday.

His graduation to the Munster senior side is another feather in the cap for Jake Flannery.

He joined the Greencore Munster Rugby Academy last summer and played a pivotal role in the Ireland U-20s’ 2019 Grand Slam success, their first at that level since 2007.

He gained further experience at international level with the Irish team that competed at the U-20 World Cup in Argentina.

He began his club career with Kilfeacle and District and played for Rockwell College before progressing to AIL rugby with Shannon.

He made his first AIL appearance of the season for Shannon last month after recovering from shoulder surgery and kicked three conversions and a penalty in their 31-13 victory over Highfield.

A talented all-rounder, Flannery has also lined out for the Tipperary Minor football team.