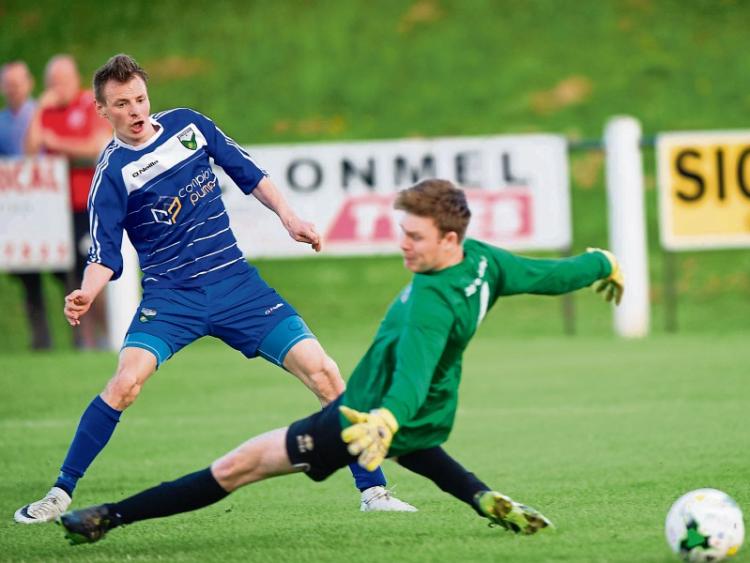 Glengoole United may well have put the final nail in the coffin for Clonmel Town's league ambitions on Sunday last.

Glengoole United pretty much assured that they would be playing Premier League football again next season while also finishing off any lingering hopes that Clonmel Town had of being in the title shake up, with a hard won 2-0 victory on Sunday.

The game was played in testing conditions for the two sides, making flowing football difficult to play at time. And despite the fact that both teams created a good number of chances, no goals were scored in the half.

The second period started in a similar fashion, but eventually the hosts started to get a foothold in the middle of the pitch, and they were rewarded when a long ball from the keeper deceived the home defence and was controlled by Danny Rafter who slotted past the visiting keeper with the minimum of fuss.

This sparked an all out assault on the United goal by the Town attackers, but the home defence were equal to all that was thrown at them. And they made sure of all three points eight minutes from time, when Stephen Holohan robbed a Town defender just outside his area, leaving him one on one with keeper from where he made no mistake to make it 2-0 and secure the points.

Clonmel Celtic’s status as a Premier League club which they have held since their formation in 2003 looks to be coming to end after they lost a vital game by 3-0 against relegation rivals Vee Rovers on Sunday morning. The result gives the away side hope though they still have a bit of work to do, leaving the hosts looking doomed and though they fought hard they just haven’t been good enough this season.

The visitors started brightly and hit the front on 20 minutes when Ronan Dwyer headed home from a corner. Tommy Kiely and Peter O’Dowd had efforts on goal for Celtic as they looked to level before the break but both attempts were comfortably saved.

The home side had the worst possible start to the second half knowing nothing but a victory would do, when they fell two behind following a quality finish from Christy English.

Celtic fought back into the game with second half substitute Shane Mullen have an increasing influence in midfield. He combined well at times with the battling O’Dowd brothers who together with Jack Purcell never gave up the fight.

Unfortunately, Clonmel Celtic just couldn’t create any clear cut chances and Vee Rovers made the game safe on 68 minutes when the hosts were undone again from a set piece with Shane McGrath powering home another header to give his side all three precious points.