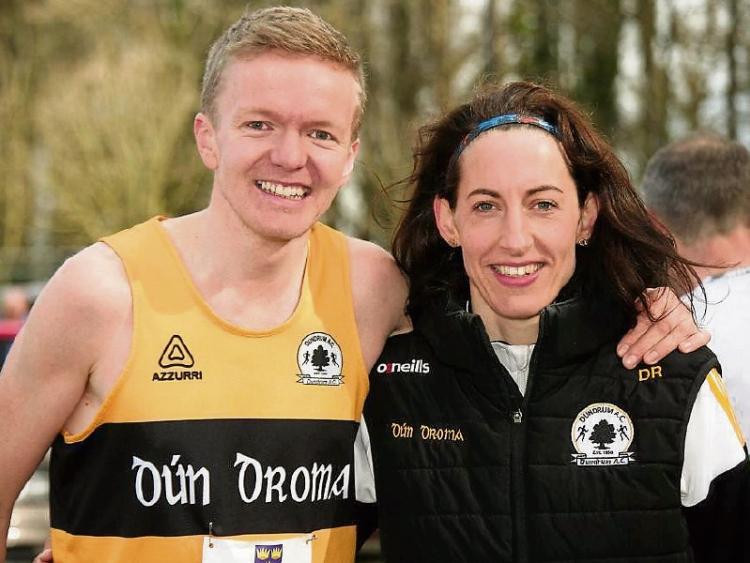 Dundrum AC’s Kevin Moore and Dymphna Ryan (pictured at an event some time ago), who both won the club’s Coilllte 5k/10k Virtual Runs, which concluded last week

Dundrum Athletic Club’s 35th annual Coillte 10k road run should have been held in Dundrum last week, but the Covid-19 pandemic put paid to the annual gathering of hundreds of athletes and supporters in the scenic village.

However, in order to not let the occasion go without having something to mark the annual event and give runners and walkers a target to aim for in these unusual times, the club organised a Virtual Run.

Participants could take part in the event in the area where they live, adhering to Covid restrictions at all times, and raise money for a worthy cause.

94 participants signed up for the event, with the option of doing a 5k or 10k distance or both over a two-week period, with the last run to finish appropriately enough on the day of the race, Wednesday July 1.

The winner of the 10k race was the current Munster Senior Road champion Kevin Moore from the local club. Kevin opted to complete his out and back run on this year’s day for the race on the breezy promenade in Brighton, England where he lives and works.

This was also the scene of his great Brighton Half Marathon win early in the year.

Kevin clocked a good 32:24 minutes for the 10k distance. Kevin’s win also got his name on the Tim Crowe Memorial Trophy for the third time as the fastest Tipperary athlete in the run.

Second was Paddy Cummins from the Moycarkey Coolcroo club who did his run over the course in Dundrum and clocked an excellent 33:45 minutes for the distance.

Michael J. Ryan, also from the Dundrum club, took third place in 37:07 while running over the Dundrum course. The fourth man to finish was Stephen Moore, who works for race sponsor Coillte and did his run in Kerry, where he resides, in an excellent 37:18 minutes.

The winner of the Women’s 10k was also the current Munster Senior Road champion Dymphna Ryan from the local club. Dymphna completed her run over the Dundrum course and clocked a cracking 37:37 minutes for the distance, proving she is still holding her form since her great Munster victory despite the lack of races.

Second was the youthful Ciara O’Neill from Clonmel Athletic Club in a good time of 42:07 minutes and just 10 seconds behind her was Irish Olympian Rosie Ryan, still proving there is a spring in her step, in 42:17 minutes.

The 5k women’s race had Clonmel AC athlete Ciara O’Neill go one better than her 10k position for a great win in 18:20 minutes. Surely we will hear more about this 21 year-old athlete in the future. Not to be outdone, Rosie Ryan also improved on her third place 10k position to take second in the 5k in a time of 22:52. Another Dundrum athlete, Louise Moore, took third place in 24:19.

The men’s 5k was an all Dundrum Athletic Club battle, with Rebel’s Heart frontman Paudie Coen first in 18:45, a great win for the Rossmore native. Second was Colm Bradshaw in 18:50, with Paudie’s brother Micheal an excellent third in 19:14.

The club  thanks all who supported the run. All entrants names will take their place on the wall along with the other 34 years at next year’s race. All prizewinners will be notified over the coming days.

With the forestry company Coillte covering all expenses involved with the race, all participants’ full entry fee will go directly to the chosen health body, Tipperary Civil Defence Clonmel. The Clonmel branch has provided First Aid cover for the race every year since it started in 1986.

The Dundrum club is grateful to Coillte for its continued sponsorship, which is greatly appreciated, and also the amenity facilities it provides in the Dundrum area.

The club is also very grateful to Niall O’Sullivan, Premier Timing Systems, for all his help with organising the event.