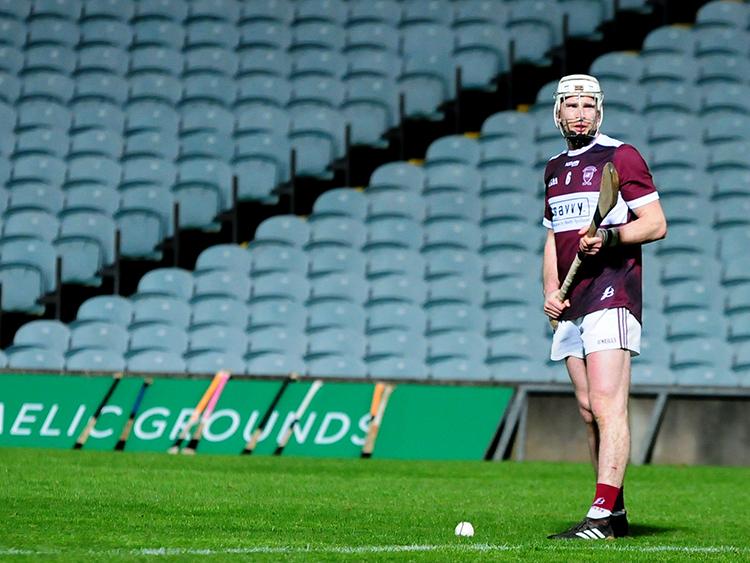 Brendan Maher pointed some great scores for Borris-Ileigh this afternoon

A fine game of hurling ended in stalemate

A free from centre back Joey McLoughney earned Toomevara a well deserved draw in the FBD Insurance county senior hurling championship at Nenagh this afternoon as they held the county champions Borris-Ileigh at bay in a fine encounter.

A game which had plenty of thrills and spills, Borris-Ileigh will be kicking themselves that they allowed for a tally of 17 wides in a game which was tight all the way through.

It was a nip and tuck first half with Borris-Ileigh enjoying a 0-12 to 0-10 interval lead. However, they could well have been in arrears had Toomevara keeper Robert Delaney not seen his penalty effort with the last puck of the half beaten away by his opposite number James McCormack.

A competitive encounter with plenty of fast play, one of the talking points of the half was the 0-4 from play from Borris-Ileigh centre forward Jerry Kelly, while midfielder Dan McCormack was getting onto a lot of ball and drawing frees all over the field.

Toomevara were giving as good as they got with Joey McLoughney pulling many of the strings from his centre back berth. Mark McCarthy too was very dangerous for them and his wonderful sideline cut from 65 yards out was one of the highlights of the half.

It was all to play for in the second half.

Borris-Ileigh had four of the first five scores upon resumption to open up a five point gap, but Toomevara came fighting back and a Mark McCarthy goal in the 11th minute after a pass from sub Paul Ryan, brought matters level again.

Toome went in front and were reeled in again by Borris' with Brendan Maher getting three of their final four scores of the game, with Jerry Kelly getting the point in the 33rd minute to send them in front. But, there was more left in Toome' and a pressure free from Joey McLoughney was dispatched over the bar  for his sixth score to share the spoils.