Having your ducks in a row is one of those quaint expressions to describe efficient levels of preparation and organisation for upcoming events. I always thought the phrase referred to shooting galleries, where you lined up the ducks as they moved across in sequence; others suggest it comes from the manner in which chicks follow the mother duck in a straight line. There are plenty of other suggestions too if you feel like checking them out.

I don’t know the exact origin; I guess you takes your pick, as the man says (whoever the man is!). Either way our County Board has its hurling ducks pretty much in a row following last weekend’s bumper fixtures programme, which has cleared the decks for quarter-finals. The intermediate grade alone has an outstanding issue relating to relegation following the postponement of the Golden/Kilsheelan clash due to Covid concerns.

Elsewhere we had a feast of hurling action over the weekend. Kilruane MacDonaghs were the first major casualties to bow out of the reckoning when they found Loughmore too hot to handle on a day of missed chances. Clonoulty found Holycross surprisingly hot too in what I felt was the most enjoyable of the weekend games.

Context is everything and I suppose Holycross were in a position to cut loose in their game with Clonoulty, because irrespective of the outcome they were unlikely to either make a quarter-final or face relegation. The shackles were off in that sense and to their credit they produced their best hurling that I’ve seen for quite some time.

Mind you it was Clonoulty who had the dream start, with Stephen Quinn planting a goal after just five minutes to set up a 1-3 to nil scoreline.

At that stage it looked ominous for Holycross but they stayed unruffled, and with Aidan Stakelum causing major problems at full forward they were soon back in the hunt.

Excellent free-taking as usual from Dara Woods kept the Holycross momentum going and by half-time they were level and looking every bit the match for Clonoulty, who could be grateful for the possession-winning of Thomas Butler.

It even got better for the Mid side in the second half. Clonoulty were struggling to unpick their defence, despite the threat of Dillon Quirke, who looked threatening. Midway through the second period Holycross substitute, Jack Skehan, set up Aidan Stakelum for a goal and the outsiders raced into a five-point lead, with an upset now looking a distinct possibility.

In the end Clonoulty mustered the required response. Stephen Quinn set up Thomas Butler for a textbook goal and in injury time it was wing back, Enda Heffernan who struck the precious equaliser. 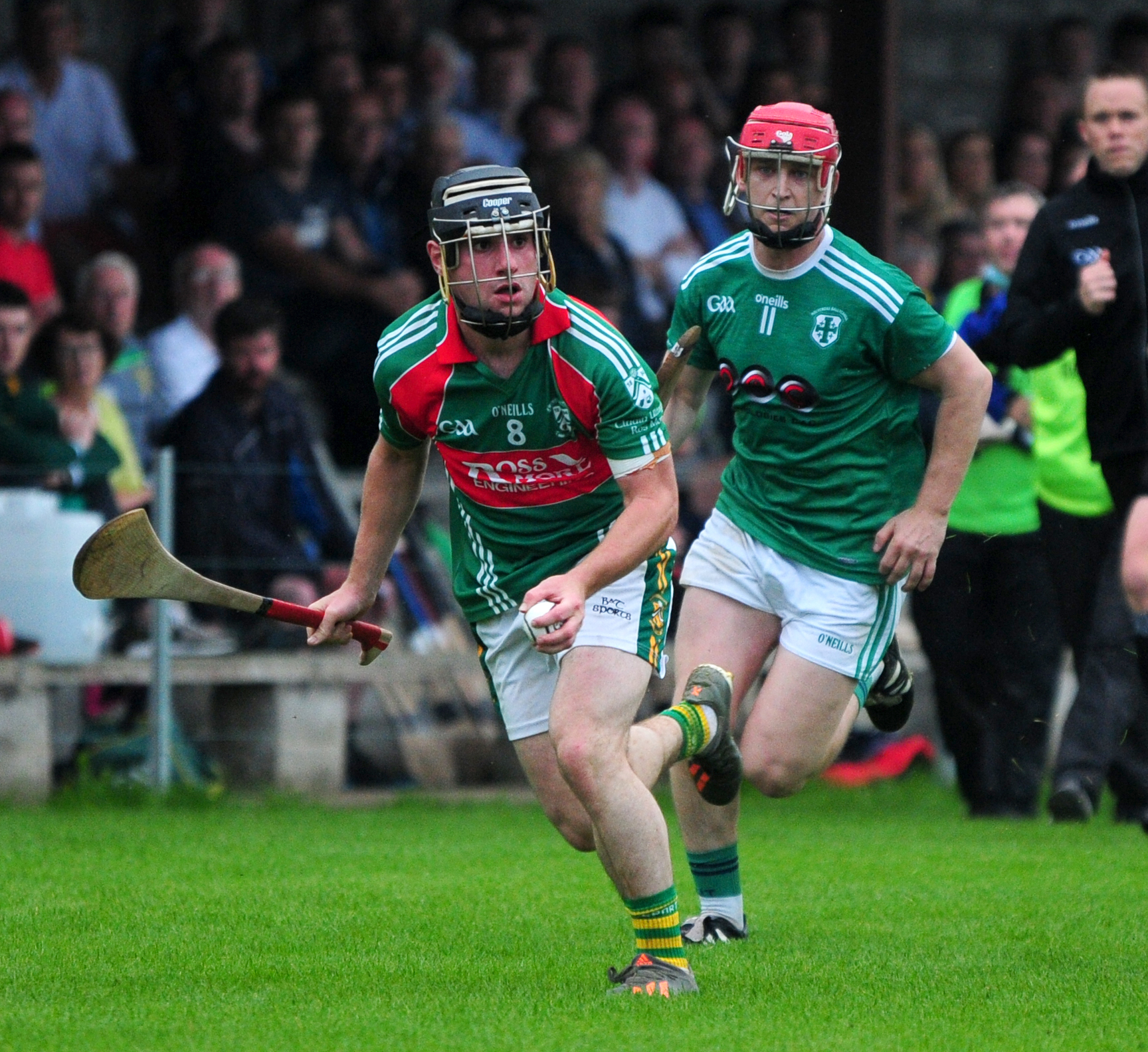 Above: Clonoulty/Rossmore’s Conor Hammersley goes on the attack against Holycross/Ballycahill

It was an old style thriller of a contest between these neighbours, with plenty of passion and swaying fortunes keeping the followers engrossed. Clonoulty were rattled and rocked but ultimately held their nerve to rescue the day and thereby claim top spot in the group.

I thought Thomas Butler was their best on the day, giving an aerial exhibition in the first half especially, as well as cleverly laying off possession. He deserved frees in the second half that he didn’t get and that in part may have contributed to one of Clonoulty’s management team being banished from the sideline. The goal was an excellent finish near the end.

The biggest casualty at the weekend was undeniably Kilruane MacDonaghs in their crunch tie with Loughmore/Castleiney. Both sides had given mixed signals in earlier rounds so this was it, the last chance to step up or step away. In the end it was Loughmore who had that bit more bite to their play against the wasteful MacDonaghs.

Cian Darcy is a fine player and free-taker but this was one of those days he’ll wish to banish from memory. His radar went badly on the blink in the first half and it cost Kilruane dearly in what would eventually be a two-point defeat.

By contrast it was a day of dreams for 36 year-old Evan Sweeney, one of those occasions where the Midas touch turned everything to gold. Kilruane might have worried about John McGrath in advance and with their focus elsewhere it was Sweeney who stole the show.

John McGrath set up the man of the match for his first goal but the second one was a real solo effort. Factor in three second half points and you have a telling contribution to such a narrow win.

The first half I felt was tepid enough before we were served a flurry of action at the start of the second period. Sweeney’s second goal was followed instantly by a cancelling flag from Cian Darcy, atoning somewhat for the missed frees, though David Kennedy won’t relish watching that one in replay.

With Noel McGrath back in much better form this time Loughmore stepped up considerably from their form against Sarsfields. Brian McGrath was playing further from goal where his input is greater, and in general the Mid side had a bit more consistency to their play than the more fitful MacDonaghs.

Mind you it still came down to a nervy finish after Kian O’Kelly got a touch for Kilruane’s second goal but the more deserving side held out. On different days now Kilruane have shown a flakiness that will be a worry for them. There’s plenty of young talent on board but maybe not the steadying influence that someone like Noel McGrath has for Loughmore.

Probably the strongest statement made by any side at the weekend was Kildangan’s. Their needs were greater than Drom/Inch’s but that’s hardly the full explanation for their emphatic victory. It was impressive stuff from the North side and won’t have helped Drom morale ahead of the quarter-finals.

Points are fine and grand but goals often have an influence far beyond their nominal value.

When you skin the opposition for four ‘greenbacks’, it makes a powerful statement, especially when you don’t spill any in return.

Paul Flynn had his name on two majors before the first water break - he was at the end of a passing move for the first and fed by Brian McLoughney for the second. In each case he finished with aplomb. Billy Seymour batted in the second for another quality finish. These were real deflationary flags for Drom, who mostly relied on Callanan’s free- taking.

When Dan O’Meara finished another smart move for goal number four early in the second half it was a case of Goodnight Irene for Drom. Kildangan’s work rate was impressive, their chasing and back-up play of a very high order. But it was that goal threat that stood out most, though Drom will point to the absence of Johnny Ryan as a major drawback.

The final game I saw at the weekend was Borris-Ileigh’s progress against Upperchurch. It wasn’t a particularly standout game in terms of quality, the first half particularly being heavy on attrition, low on sparkle.

Upperchurch got the ideal start, Jack Butler goaling after mere seconds of action. It set the early trend, with the Church anything but church-like in their approach and Borris’ struggling to find a response. It was an uninspiring first half, with the teams finishing level.

Early in the second half Niall Kenny batted in a goal and gradually the North side took firm control of proceedings. The gap stretched out on a string of Borris’ points, Padraig Greene alone keeping the Upperchurch account ticking from play and frees. In the end a Pat Shortt free gave the Church a consolation goal but this was a comprehensive defeat. 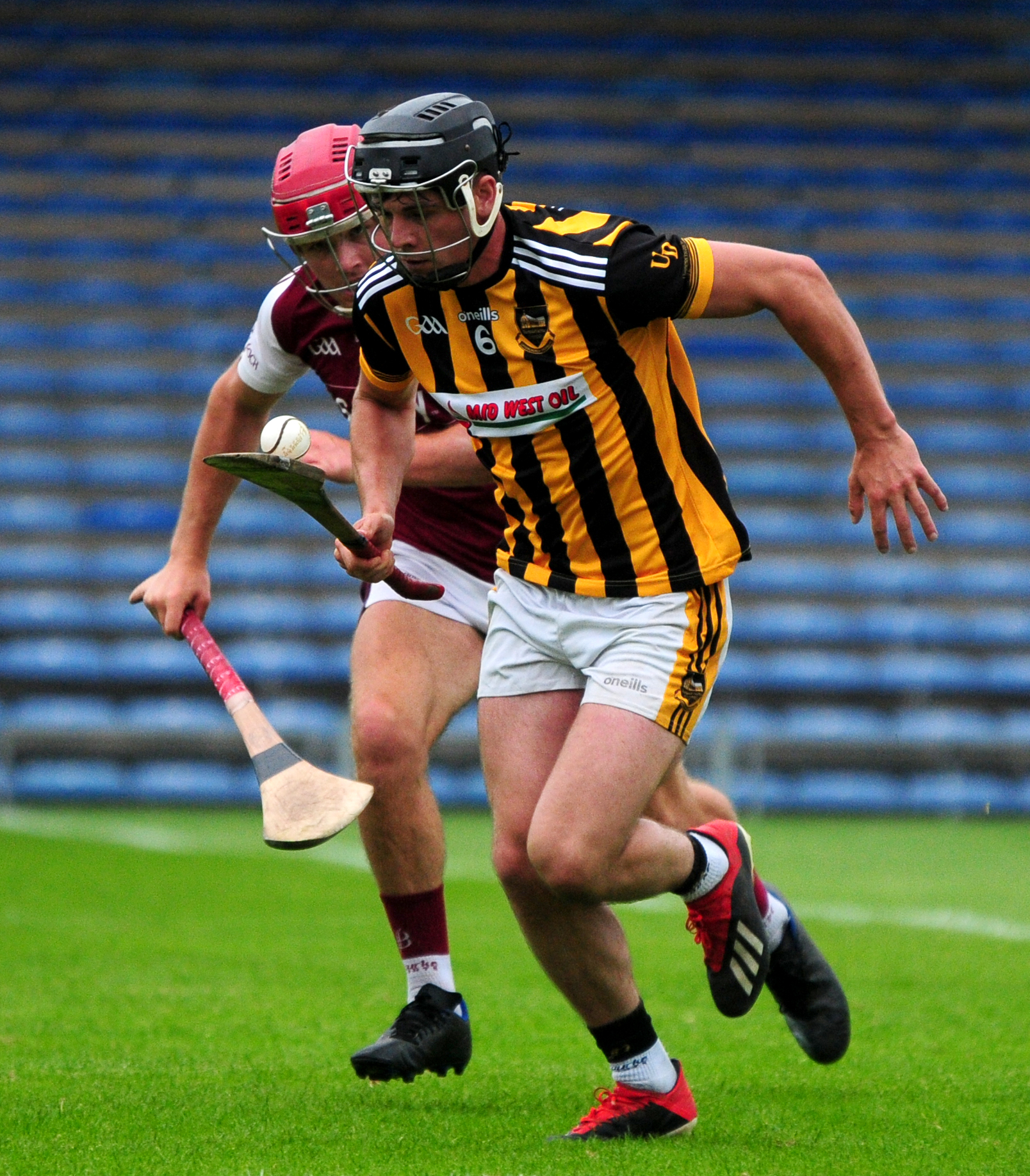 Statistics are often starkly revealing. A mere three of the ten Upperchurch points came from play, which is never going to be an adequate return. There’s another uncomplimentary statistic too: the losers ended with six players on yellow cards, one or two of which could (should?) have been red in colour. No further comment is needed.

For Borris-Ileigh in the end it was a job done, another essential staging post in their bid to retain their title. They’ll have woken up stiff and sore on Monday but have a fortnight now to recover ahead of the quarter-final. They owed a lot, I felt, to Niall Kenny on this occasion.

He did most to unhinge that Upperchurch defence in the second half particularly, scoring one goal and coming very close on a few other occasions, including one rugby-style pulldown as he headed goalward. And still you hear there’s no issue with cynicism in hurling. Indeed.

And so the ducks are truly in a row for a fortnight’s time when quarter-finals beckon. Monday night’s draws will have whetted appetites, with Borris’ defending their title against neighbours Drom, Kildangan and Toomevara providing an all-North affair, Clonoulty resuming acquaintance with Loughmore and Nenagh facing a tough one in Sarsfields.

Double bills on Saturday and Sunday at the Stadium are the plan, Tom Semple’s field being the most manageable for present Covid restrictions.

The quarters in the Seamus O’Riain Cup have thrown up some real appetisers too, such as Swans and Mullinahone in an all-South affair. All-North pairings feature in Newport v. Silvermines and Templederry versus Lorrha. Sarsfields mark 2 play Killenaule in the fourth game.

The real pity is that most of these games are going to clash with the Seamus O’Riain and intermediate fixtures, losing out heavily to the Dan Breen in the publicity stakes.

And I haven’t even mentioned the serious business of relegation in the three grades also.

The ducks are in a row – and it’s weather for ducks at the moment.

Let’s hope the horizon brightens in every sense for the final stages of the championship.