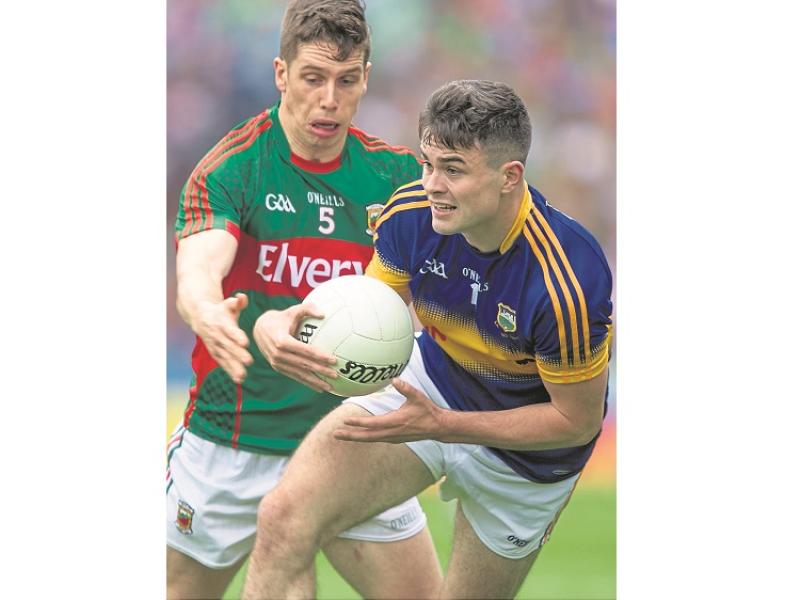 Tipperary’s great championship run came to an abrupt end at Croke Park this afternoon when they were on the receiving end of a 13-points defeat at the hands of Mayo. It was a hugely disappointing conclusion to a campaign for David Power’s side but, in truth, they can have no complaints, the Connacht champions putting them to the sword with an overpowering display which included five goals by the end.

Tipp’s best period was the opening 10 minutes in which they had two excellent goal chances from Michael Quinlivan and Conor Sweeney, with David Clarke dealing with both, even if he could have been made work a little harder. Neither found the back of the net though and almost immediately Tipperary were punished at the other end when Cillian O’Connor punished them with a goal in the ninth minute after a soft turnover.

Almost immediately Brian Fox responded with a solo goal for Tipp but it was just a temporary let off with Mayo driving on to lead by 1-6 to 1-2 at the first half water break.

The real damage in this game was in the second quarter when Tipperary conceded three goals from Diarmuid O'Connor and Cillian O’Connor (2), the nature of all three somewhat self inflicted via turnovers and a desperately defended 45 taken by  Cillian O’Connor, with his brother ghosting in to tap the effort that fell short to the net past Evan Comerford. The other two goals resulted from a soft turnover and a highly dangerous lateral pass across defence.

At the break the game was all but over with Mayo leading 4-12 to 1-5, with just two points from play for the Premier via Colin O’Riordan and Steven O’Brien.

Sixteen points adrift at half-time it was game, set and match to Mayo but credit to all concerned Tipperary dug deep again and had another go at it in the second half.

Conor Sweeney frees were Tipp's only source of scores though with two early second half points before disaster struck again when Cillian O’Connor netted once more after a Tipperary defender slipped under the dropping ball leaving the Ballintubber star to do what he does best for his fourth goal. Christmas had come early it seemed.

By the 50 minute the margin had drifted out to a whopping 21 points with Mayo leading 5-17 to 1-9 but Tipp never threw in the towel and fought hard over the closing stages, rewarded with late goals by substitute Paudie Feehan and near the end by Conor Sweeney with a deserved green flag.

Those late goals took the real dirty look off the scoreboard but had Tipp converted some of the other goal chances that fell their way right throughout the second half they would have been a lot closer. Those chances fell to Philip Austin, Liam Boland and Michael Quinlivan but luck deserted them all.

Today was not Tipp’s day for sure and no one will be more disappointed than the players themselves, the performance they wanted to get out there just didn’t happen and it seemed every time Mayo got near the goal they were being rewarded. But credit to the team in green and red, the intensity of the tackling was huge throughout, the aerial power awesome and Tipperary never really got any freedom to play the type of game they would have preferred. Mayo had their homework well done.

The pain of defeat will hurt of course, but the players will be even more disappointed in that they never did themselves justice. The performance that they needed to produce, and that they are well capable of producing, never happened today. The self-inflicted concession of goals and the inability to take their own goals chances all went against Tipp.

But it had been a great campaign up until to today for Conor Sweeney’s team and no one can take the achievement of a fortnight ago from them. Winning a first Munster title in 85 years was a huge accomplishment and they will go down in history for that achievement.