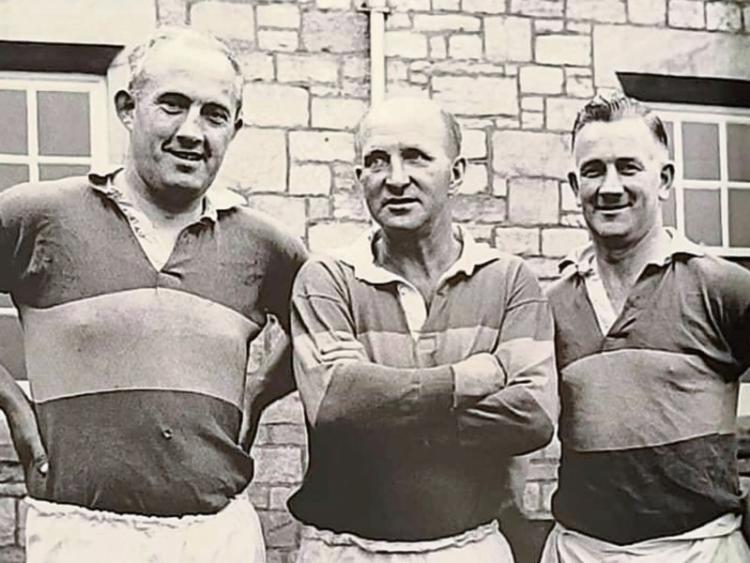 When Ring wore the blue and gold: Theo English (right) with fellow hurling legends, Tipperary’s Mick Maher (left) and Cork’s Christy Ring before a benefit match in Clonmel in the 1960s

The worldwide GAA family is this week mourning the loss of Theo English, a man described as a legend of the GAA in Tipperary, who died in the early hours of last Sunday.

Known throughout the length and breadth of the country simply as Theo, he passed away at the South Tipperary General Hospital in his home town Clonmel, where he had been a patient since before Christmas.

In a glittering career that spanned the early fifties to the late sixties, Theo English, who celebrated his 90th birthday last July, won every honour in the game.

He was a member of one of the greatest Tipperary hurling teams of all time.

Not only was he a hurler of some renown, he was also a talented footballer, winning county titles with Clonmel Commercials and the Old Bridge and a Munster junior football championship with Tipperary in 1952.

The club with which he was most associated was his native Marlfield, with whom he lined out for more than 20  years, playing a leading role on the teams that won the club’s four south Tipperary senior hurling championships in 1960, 1962, 1964 and 1970.

At the time of his retirement he was the longest-serving midfielder the Tipp senior hurling team ever had, playing in the position for all of 14 years from 1953-1967, and is widely regarded as one of the greatest players in the history of the game.

He also received two Cú Chulainn Awards, the precursor to the All Stars, during a glittering career.

Along with fellow south player Mick Roche, from Carrick Davins, he had the honour of being  included at centrefield in Tipperary’s hurling team of the Millennium in 2000.

Following a successful playing career, he continued to make a huge contribution to the GAA and was a senior hurling selector for Tipperary’s All-Ireland hurling successes in 1971 and 1989.

Following his time as an inter county selector, Theo went on to make a positive contribution to several club sides and he brought something special to every club, and was described by many as the best judge of a hurler in his time.

He was also an excellent referee and took charge of  many important games around south Tipperary.

He served on the Tipperary County Board for a time and was the county’s representative on the Munster Council for a one-year term.

Tipperary County GAA Board chairman Joe Kennedy said “Theo English was an outstanding player for both club and county. He excelled as a player on Tipperary teams during a golden era for hurling in the county.

“He can truly be described as a legend of the GAA in Tipperary.”