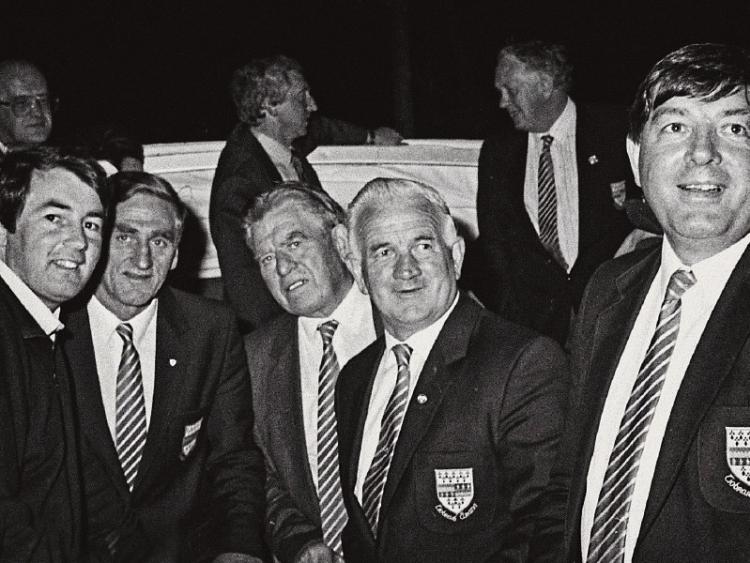 The passing of Theo English in his 91st year will have reawakened memories of Tipperary’s golden age for many hurling followers. The midfield maestro from Marlfield holds a very honoured spot among our greatest-ever exponents of the game. His passing will be mourned by many.

Theo’s career, by any yardstick, was remarkable. He didn’t feature as a county minor. Coming from a small rural club on the outskirts of Clonmel may have been a factor in that, where opportunities to gain exposure were limited, especially back in the forties.

A latecomer then to the county scene, he first made his mark with the juniors, winning an All-Ireland in 1953, which was his fourth year on that selection.

Thereafter his career really took off, with promotion to the county seniors in 1954. The rest, as they say, is history – and what an incredible history in Theo’s case.

Incidentally I note that he’s listed on the Tipperary Archive as a dual player in ’54, being part of both county hurling and football panels.

He had won a Munster junior football medal with Tipperary in 1952, so his footballing ability was well recognised. He played with both Clonmel Commercials and Old Bridge. It’s the hurling, though, that established him as a household name throughout the GAA world.

Interestingly, Theo was in his 24th year when he made the Tipperary senior hurling panel, so he was a late developer but one who enjoyed great longevity thereafter.

He was 28 when winning the first of his five senior All-Irelands in 1958 and was 37 when he finally retired after defeat in the 1967 All- Ireland decider.

Throughout that golden era for Tipperary hurling, Theo was an ever-present and crucial cog in the overall machine. At a time when strength and conditioning coaches and nutritionists and sports psychologists were unheard of, Theo was renowned for his attention to training and match preparation.

He wasn’t the tallest of men – around 5 feet 9 inches I think – but he was powerfully built, and even in later life you could appreciate that muscular physique.

In an era of heavy hits then, Theo could stand his ground against all comers, and it was interesting to hear former colleagues in the past few days remarking how they never remembered him being knocked off his feet. He was tough and durable. Donie Nealon has highlighted his fearlessness as yet another standout quality.

Hurling back then looked very different to the modern version. It was more like what Cyril Farrell would term ‘whip and hip’.

The emphasis was always on first-time whipping on the sliotar, whether in the air or on the ground and being able to take the hip and shoulder jolts that were an integral part of the play. Theo excelled in all those departments.

My memory of his hurling is a vague enough recall of his final years but since his passing I’ve heard a liberal deployment of adjectives like economical, neat, solid, safe, reliable, consistent and durable being used by many to sum up his hurling.

He didn’t attempt the spectacular but seemed to be an ever-present mainstay of that Tipperary team, a centrepiece, stout and indestructible.

One feature of his hurling that I can recall was his ability with the sideline cut. Modern players like Joe Canning have brought this skill to a new level of perfection but back in Theo’s time, with a much heavier ball, scores from sidelines were a rarity. Yet Theo was decades ahead of his time, with the distinction of having pointed sidelines in both Munster and All-Ireland finals.

His medal collection is testament to a stellar career. Apart from the five All-Irelands there are seven Munster medals and eight league wins. This was the era when Tipperary were the league specialists. His collection of Railway cups with Munster underline his reputation outside the county.

Younger generations won’t fully appreciate these but back in Theo’s day the Railway Cup was a highly-prized competition, attracting huge crowds where you had the cream from each county teaming up in an inter-provincial competition. Making your county team was one thing – making the Munster selection was a different level entirely.

Theo missed out on All Star statuettes because those awards only started in 1971 – very timely from a Tipperary perspective, being All-Ireland winners that year, with Theo as selector, incidentally. However, in the sixties there were forerunners of the All Stars called Cú Chulainn awards and Theo was honoured on two occasions in ’63 and ’66.

Interestingly - and ironically - those were years of disappointment for Tipperary.  That ’63 Munster final defeat to Waterford broke the winning sequence that might have brought five-in-a-row. In ’66 it was Limerick who took down the reigning champions, this time in a Munster semi-final.

Winning any accolade, be it Cú Chulainn or All Star, on an All-Ireland winning year is one thing – doing it in a losing year is quite another. It means that despite your team’s eclipse you still shone brightly - and that was Theo in ’63 and ’66.

Not surprisingly he won his place on the Tipperary team of the Millennium and when the GAA celebrated 125 years of existence in 2009 Theo was chosen as one of the 125 greatest hurlers of all time.

The word legend is bandied about a lot these days to the extent that it has become meaningless. In its true meaning, however, it applied to people like Theo English.

With his club Marlfield he was the driving force behind four south senior hurling titles, in 1960, ’62, ’64 and ’70. Forever associated with his home place, he put Marlfield on the map.

It was typical of the man that once his hurling days were behind him his involvement with the game didn’t cease.

Just three years after retiring from inter-county action he became a county selector alongside John Lanigan, Jimmy Hennessy, Kieran Carey and Sean Ryan. They lost the Munster final to Cork but made amends the following year when going all the way to win Tipperary’s 22nd All-Ireland title in 1971.

When Babs came calling in the 1980s Theo was back on a selection committee alongside old team mates, which eventually ended the famine with the 1989 win over Antrim. In total it means that Theo had a part in seven All-Ireland wins by Tipperary, either as player or mentor.

His role as mentor is interesting because it highlights his ability as an observer of the game. Obviously his on-field achievements gave him a status when involved with other teams, but that had to be backed up by an astute assessment of players and games.

At club level Theo is very fondly remembered in Cappawhite. After years of frustration the west Tipp club brought him on board in the early 1980s and under his guidance entered the most successful era of their history.

With just a single west title to their credit from 1962, they now did three-in-a-row from ’83 to ’85. It would be ’87 before the historic breakthrough of their first (and only) county win but it’s surely reasonable to suggest that Theo’s work in those earlier years laid the foundation for 1987.

Overall, Theo’s legacy is considerable. His contribution to Tipperary hurling, both on-field and off means that his place in the history of the county is assured.

For a time, he was on the county board and served for a year on Munster Council but I always sensed that he was happiest when directly immersed in the game. The boardroom could never match the dressing room.

He was gregarious, with a fondness for ballroom dancing and horse racing. Incidentally I wasn’t aware until this week that his real name was Thomas English, the Theo coming from a T.O. abbreviation of Thomas – Theobald he was not.

I’ll finish by quoting Seamus Leahy, who wrote a pen picture on Theo for Michael O’Meara’s outstanding South Tipp history: “Theo English was one of the most extraordinary sportsmen to come out of the south Tipperary division … As a hurling midfielder he had no master …  Doing the simple things well, he was an indefatigable worker, ranging when necessary from his own back line to the goal line, his easy style concealing the enormous range of skills.”

Peaceful rest to his soul and our sympathy to his family.