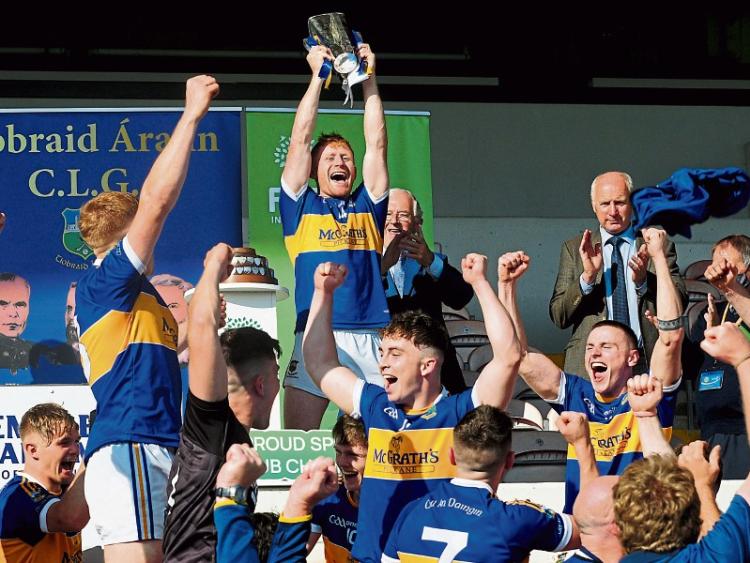 Last year the North division decided not to proceed with a local senior hurling championship because of the pandemic restrictions. I presume that call stemmed from the fact that the division is top-heavy with senior sides.

Putting on a four-team west championship is one thing – juggling with fourteen sides for the north equivalent is quite another matter.

There are 32 senior hurling teams in Tipperary, divided equally between Dan Breen and Seamus O’Riain - in essence our senior A and B grades. With fourteen (including two Kiladangan sides) the northern region supplies close to half the total.

A steady flow of intermediate wins over the years has generated this lopsided situation. For example, there have been 21 intermediate finals since the turn of the century, with north teams winning 11 of them, the mid and west sharing four apiece, with two going south. Thus, you get this proliferation of north senior teams.

The mid has 10 senior sides, including two from Sarsfields and last year’s intermediate winners, Gortnahoe/Glengoole. Then the west and south have four each, the latter losing Ballingarry last year.

Undeniably then the hurling base in Tipperary tilts heavily towards the northern half of the county, and this is reflected in any statistics you care to reference. When Tipperary lined out against Galway in last year’s All-Ireland quarter-final, 10 of the starting fifteen were from the north division, with the remaining five from the Mid.

Of the 21 senior club championships played since the turn of the century 11 have gone to the mid, eight to the north and one apiece to the west and south.

It’s a skewed scenario, but it is what it is. More encouragingly the minor side that lost last year’s Munster final to Limerick had a better spread of representation, with the starting fifteen featuring six from the Mid, five west, three north and one from the south.

Worryingly, the south lags behind, even if Peter McGarry (St Mary’s) swapped quantity for quality.

All of which is a preamble this week to a look at the north sides, especially those competing for 2021 honours in the Dan Breen.

One of the most exciting aspects of the games is when a side makes an historic breakthrough. There’s a romance to such stories - even neutrals share in the delight - and others are encouraged to aim big.

Thus, Kiladangan’s breaking of the mould last year won widespread applause. The fact that it was achieved in such spectacular fashion added to the glamour. Bryan McLoughney wrote himself into history with a goal for the ages, daring and dazzling in its execution.

Inevitably Kiladangan’s emergence was well signposted over the past two decades. You can easily pick out the various staging posts on the journey: a county intermediate win in 2004 capped by an All-Ireland; a senior breakthrough in the north in 2008 with follow-ups in ’13, ’15, ’16 and ’19; a county U21 in 2019; county senior final appearances in ’16 and ’19. This was heading only one way and 2020 was the destination.

Now for the defence of the crown. First timers often find it difficult to back up the achievement so that’s Kiladangan’s challenge for 2021. With five of their players on Liam Sheedy’s panel and a deep player pool to fish from, there’s no reason why this should be a one-hit wonder.

The benefits of the breakthrough should see them drive on to more success but, as always, uneasy lies the head that wears the crown. At odds of 7/2 they’re second favourites behind Thurles Sarsfields.

Speaking of Kiladangan reminds me that recent reports of Eamon Kelly and Conor Gleeson taking charge of Clare side Tulla are, it seems, without foundation.

Kiladangan’s neighbours won’t be shy about targeting the newly-crowned champions should the opportunity arise in 2021.

Toomevara have slipped from prominence since their last hurrah in 2008, which brought down the curtain on an incredible era for the club. Between 1992 and 2008 they won 11 county titles in a 17-year period.

Last year Toome’ bowed out at quarter-final stage to Kiladangan, so I’m sure they’d relish a crack at the new champs in 2021. Eoin Brislane remains as the gaffer, with Trevor Galvin doing the coaching.

The Greyhounds haven’t gone away you know, but the Dunne era is certainly over as they try to regain former glory. You’ll get 16/1 on their prospects at the bookies, which is probably an accurate reflection of their present whereabouts.

Just in the road from Toomevara you have Nenagh Eire Og, who this year will look to the vast experience of Brian Horgan to drive their bid for glory.

Their story is one of perennial optimism, which usually falters on a key day when much is expected. Last year was typical - 10-point winners over Sarsfields in the quarter-final and then 10-point losers to Loughmore in the semi-final. The swings and roundabouts can be extreme with Nenagh.

Still, they’re listed at 7/1 for this year’s championship – the same as Loughmore - which probably reflects the fact that they’re forever in the mix, even if that solitary county win from 1995 is a poor return for a club of such prominence. Since winning that stand-alone title over a quarter of a century ago they’ve lost five finals.

After the glory of 2019 Borris-Ileigh couldn’t quite raise the banner as high in 2020. Drom/Inch eventually found their measure at quarter-final stage in a draining game that went to extra time and penalties. We saw the best goalkeeping display of the year that day from Eoin Collins.

Interestingly, Galway’s Johnny Kelly returns for another season, obviously feeling there’s more to come from this crew. And why not, with their younger players now a year older and wiser and well placed to have yet another stab at events.

Jerry Kelly’s failure to get the call from Liam Sheedy is often a point of discussion wherever hurling followers gather.

His point-scoring display in the All-Ireland club final against Ballyhale was remarkable, though obviously some facets of his game act as a counterbalance. Still, others have been brought in on lesser evidence.

Borris’ are on offer at odds of 6/1 alongside Kilruane. The MacDonaghs have been disappointing in recent years. Many viewed them as a coming team and, perhaps with a memory of the great team from the eighties in the background, expected deliverance.

It hasn’t happened, especially when they arrived at Semple Stadium and were found wanting on crucial days.

Last year they had a solitary win over Moycarkey in their group but failed to make the knockouts when beaten by Loughmore in the final round. Earlier they lost badly enough to Sarsfields.

A team with some talented individuals they’ve, nonetheless, been unable to put it together as a unit in a way that the team of the 1980s could do so emphatically.

Liam O’Kelly, dad of Kian, manages the side this time, assisted by John Cahill.

Finally, Roscrea look to ex-county man John Carroll in a bid to revive their fortunes after battling relegation last year. There’s mention that John Sheedy may also be on the ticket for a club that has hit lean times at senior level.

Their last big county hurrah was back in 1980 but I’m old enough to go back further to their glory days of the late sixties and seventies. Tadhg O’Connor and Francis Loughnane were particular boyhood heroes from that era, their roles in the 1971 All-Ireland win still a very vivid memory.

A 2017 county minor title has offered hope for the club that some green shoots are appearing, though as ever nurturing the tender buds is challenging. Alan Tynan gives the club a presence on Liam Sheedy’s panel.

The bookies will give you odds of 40/1 on their chances of county success, which reflects their lowly position. They won’t be winning Dan Breen in 2021, though I’m sure they’d be happy with much lesser progress as they try to build for the future.

The north division also has eight teams competing in the Seamus O’Riain, including Burgess, who dropped from the top tier last season.

Newport and Lorrha would be rated among the front runners, both failing to Kelly and co from Mullinahone last year. Lorrha will again be managed by John McIntyre, while Tom Moylan once more takes charge of Newport, with Limerick’s Joe Quaid doing the coaching.

However, the Seamus O’Riain Cup is very competitive with the likes of Silvermines, Ballina, Templederry, Portroe and Kiladangan’s second side all rating their chances of being in the shake-up.

Finally, a correction and an addition from previous columns. A few eyebrows, it seems, were raised in Annacarty and Donohill areas when I mistakenly listed their camogie management team as the men who’d be guiding their senior hurlers in 2021. Don’t even ask me to explain that one.

Anyway, I’m glad to be able to announce that their hurlers will this time be managed by Ronan O’Brien, with Ollie Kelly as coach/selector, Dan Hogan as S & C and selector and Michael McGrath and Pakie Ryan as selectors.

Elsewhere, in relation to the Kickhams history and omissions therein there was another one overlooked, apart from Joe Ryan.

Joe Mullooly was a Harty Cup winner with Thurles CBS in 1956 and the same year was wing back on the Tipperary minors, who were far too hot for Kilkenny in the All-Ireland final.

He was a cracking player, who I remember making a comeback later in life and briefly playing in goal for the club.