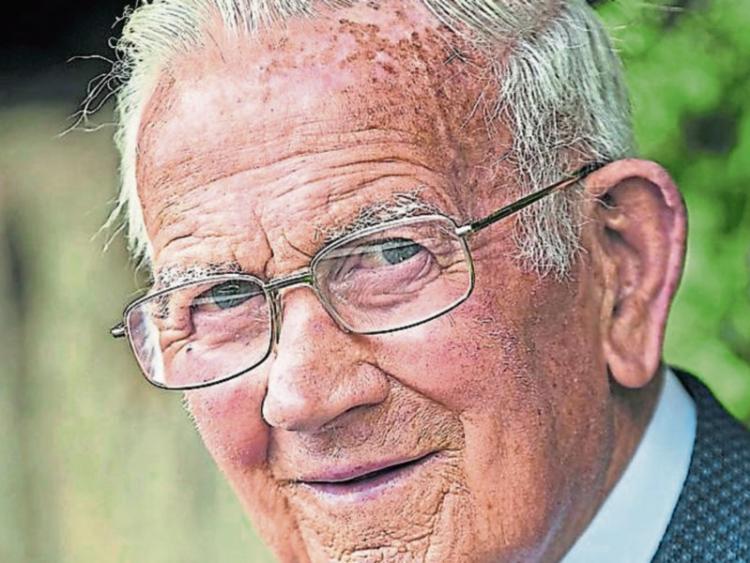 Theo English, Monkstown, Barne, Clonmel who passed away at the age of 90 on January 10

I would like to express the sympathy of Marlfield club members and my own personal sympathy to his wife Maureen and family on the death of our club president Theo English.

Being a neighbour of Theo’s in my childhood, a school friend since 1942 and a club mate since 1946, Theo has been a lifelong friend of mine and he will be missed.

The death of Theo brought many happy memories across many years back to me.

I first met Theo in 1942 when I transferred from Rathkeevan national school to Marlfield school.

At my first annual January party and concert I saw Theo performing. He sang and played the mouth organ  for the Irish dancers. This was my introduction to Theo English.

Next came my first encounter with Theo in the context of hurling. Our teacher Mr Kearney, known by his students as Pat (behind his back) announced that he wanted every boy in the  school to bring a hurley or some instrument that they could play hurling with into school.

We did. Wattles, cricket bats and hurleys were piled high in the cloakroom outside the school building while we all attended lessons.

This mixture of equipment was used until everyone managed to source a proper hurley. At lunchtime every day, weather permitting, we went to The Lawn.

Our teacher Mr Kearney came with us and brought his whistle. He threw the hurleys on the ground between the two teams and he adjusted the teams if he felt that one team had a marked advantage over the other.

This could be done if Theo English and Michael Kennedy happened to be on the same team. The match was played and then it was back to school.

By the end of summer the boys from Marlfield school had achieved a reasonable standard of hurling.

On a number of occasions Mr Kearney, originally from Skeheenarinka, stated that there were a couple of boys from the school that he hoped to see wearing the blue and gold for Tipperary and playing in Croke Park.

There was no hurling team in the village at that time and so the boys, including Theo organised their own matches.

These matches were arranged informally with pupils from other schools. An informal meeting with a pupil from Grange could lead to a match at Knocklofty, or a match with Rathkeevan school could be played in a field between both schools. Clerihan were played in Newchapel.

Sometimes the matches were played without a referee. Players themselves recognised the foul, pulled up and sportsmanship was generally obvious.

The boys from Marlfield, including Theo, were unable to play hurling for Marlfield at the time as there was no hurling club in Marlfield until 1946.

The late Paddy Quinlivan decided to collect “a few bob” locally to enter a team in the south championship that year.

The majority of that first team had attended school in Marlfield and were very loyal to each other.

During one of the club’s first matches, 16-year-old Theo was a sub on the team and begged my father, who was one of the selectors, to put him on.

The selectors felt that Theo was too young but they eventually conceded and allowed him to play.

His skills became evident to all and a future star was recognised.

From that day Theo played on all Marlfield teams until he retired at 49 years of age.

Maureen, Theo’s wife was a central figure during this  time, encouraging and supporting him as he practised, played and succeeded.

Theo worked hard on becoming and remaining fit. Early mornings on my way to work I would meet Theo returning from his morning workout, having completed a couple of laps of McGrath’s ten-acre field.

The hurley and the ball were always in the car. During his lunchtime he worked on his ball skills.

At that time there were no hurling walls as there are today. There are several walls in Marlfield where he practised his hurling. The ball was never taken in the hand, the ball was hit off the wall, came back, played on the hurley, hit back at the wall and played again on the hurley, with the hurley being twisted at different angles to get his wrist work right.

Theo considered the hurley an essential tool and began to make his own hurleys in his mid twenties.

During their playing careers, Theo and Christy Ring both drove oil lorries but for different companies. A clear memory is when Christy came to Clonmel with oil they would arrange to meet at Theo’s house.

Joking and laughing together, they played hurling on the road.

Another memory of Christy Ring and Theo in Clonmel is one of a charity game played in The Showgrounds, the original Gaelic games field in Clonmel.

Various county hurlers came to make up a football team and Christy Ring, Mick Maher and Theo were on the same team and all wore the blue and gold.

In the 1950s Theo won his first junior title in Davin Park in Carrick-on-Suir.

At that time there  was a train travelling from Thurles to Carrick, and hundreds from around the county attended the match and two players stood out on that day - Theo English and John Sutton from Kilkenny. Both made the senior teams for their counties after that.

Theo was always interested in match analysis. Every Monday after work, Theo called to visit my father. They would discuss the previous day’s match, every stroke was examined, the skills used were recognised and tactics displayed, criticised or adopted.

Theo was a very clean hurler. I can only remember one occasion when his name may have been taken by the referee.

On that occasion Micheal O’Hehir, the RTE commentator, stated that it was the first time he had seen Theo’s name being taken. Theo lifted his jersey to show his ribs to the referee, they were skinned and bleeding. If my memory is correct, the referee put away his notebook.

No hurler or footballer, and certainly not a hurler with a long and eventful career like Theo’s could escape without injury.

One incident in particular stands out in my memory. At a football  match between Ardfinnan and the Old Bridge in Cahir - this may have been a south semi-final - Theo rose to field the ball.

His marker didn’t and as Theo came to ground with the  ball his marker came in under him. Theo had a very nasty fall and broke his shoulder.

A few weeks after the incident Theo played in a Munster final.

This remarkable recovery is attributed by some to Theo’s ritual when injured. This ritual involved visiting the Well before sunrise in the morning and placing the injury under the spouts there. He continued to visit St Patrick’s Well throughout his life.

Theo was also known far and wide for his team coaching skills.

During training sessions in The Lawn, Theo would be the first man there. If there was any young lad present he would throw him a hurley and practice hurling with the young lad until the others arrived.

Training was never a chore for Theo or the teams he trained at that time. Laps of the field, forward  sprints, backward sprints, leap frog and ball skills were repeated until Theo was satisfied. Theo’s experience in club training proved useful when he became involved as a selector with the Tipperary county team.