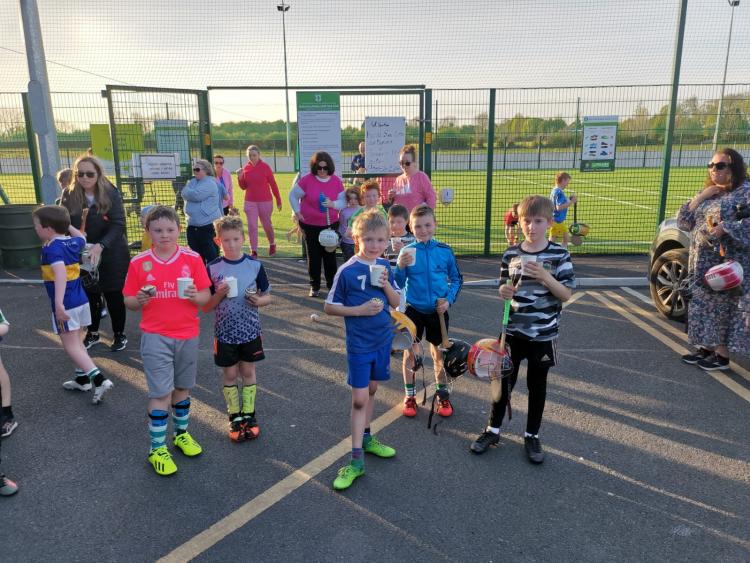 Holycross Ballycahill u9's back in training this week

Like new calves let loose on fresh grass, the young boys and girls of Tipperary gorged themselves this week on a feast of kicking of the leather and banging of the sliothar off ash, as restrictions on outdoor training for juveniles was lifted.

At long last the sounds of summer are now being heard in our GAA fields as laughter, chat, whistles, cheering, crashing, grunting, encouraging, slagging and much more besides have returned - a little bit of normality has replaced the extraordinary blitzkrieg from which we have been under siege since Christmas.

It's right about time too - the younger generations have really missed the physical exercise and the mingling with their pals outside of the school setting. The Association proved itself well capable of managing training and club and inter county activity during the last lockdown periods, so it has been a real shame that they were not entrusted with continuing to do the right thing this time round.

But, that's all water under the bridge now and the coaching and teaching of the skills of Gaelic Games take centre stage for the immediate future - when actual competitive games will be permitted is still in the lap of the Gods, but at least the fields are open for business again and the pressure valve has been released.

Quite what affect these lockdowns will have had on our younger generations will only come to light in years to come. The constant Covid narrative which has dominated the news agenda for eighteen months now has been predominantly negative, and that kind of nuance is not good for anyone. At least as adults, we are able, in some way, to see the wood from the trees; to come to some sort of rational assessment of what we are being told; and to work out and make sense of the multiplicity of mixed messages coming from our so-called civic leaders. How in Gods name they have managed to make a complete dogs dinner of the messaging so consistently is, quite frankly, astonishing.

And, our kids have been listening to this. Without the value of wisdom and experience, and the ability to filter the barrage of waffle, they have been almost brain-washed by the negativity. Just have a listen to any group of young teenagers speaking to one another and at some stage in the conversation you'll hear them talking about Covid. Or, better still, have a look at their text messages and social media platforms for an even more informed insight.

No matter - hopefully now they will have something else to talk about and to occupy their young minds. Ladies football and camogie, hurling and gaelic football are all back in the field in the juvenile ranks and with a bit of luck the adult club players will return very soon also - we'll all be waiting with baited breath to hear the announcements on Thursday, although we probably have a fair idea even now as to what will happen, thanks to the leaky nature of Cabinet - they say the government doesn't do a tap. Well, they could do with getting in a plumber to sort out all their leaks anyway, that's for sure!!!

The sound of the returning juveniles to play would have resonated with the late Canon Liam Ryan, former Mid Board Secretary, administrator, referee and great GAA man, who was laid to rest on Monday in his native soil in Holycross. He was a man who measured success, not in the number of trophies and medals won, but in the numbers participating, enjoying and delighting in the native games which he loved so much, and which he worked so hard to promote in a number of settings.
His brother Mikie is a revered figure in mid Tipperary - likewise he is a man who refereed also, and who has given sterling service to the GAA as a player, official and administrator.

Both men were committed to parish first and foremost; then to division; then county. They delight in the clash of the ash and the hip-to-hip nature of our games, but they perhaps delighted most of all in meeting colleague and opponent alike, friend and foe, for a chat about the games and about life. And, no matter where you would meet them, that chat was always informed, sincere and very pleasant.

Canon Liam was called ashore this week by the Great Referee - the final whistle of his very full 82 years of life sounded. A true, committed and loyal priest beyond reproach or reprimand, he will be missed by Mikie and family to whom sympathy is tendered this week.