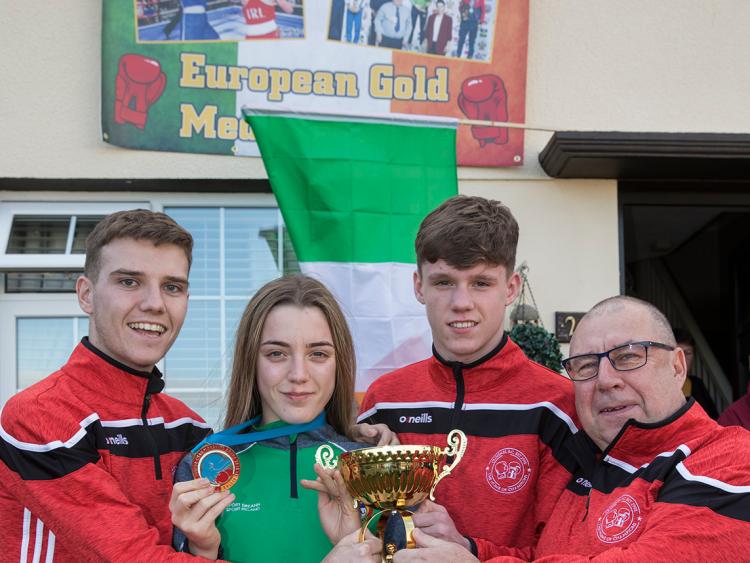 Above: Ellie Mai Gartland has been one of Clonmel Boxing Club’s most successful boxers in recent times. Here she is welcomed home after winning the European junior title in Russia in 2018 by her fellow Clonmel Boxing Club members and brothers Jamie and Jerome, and club coach Martin Fennessy

Boxers may not be back in the ring yet but the members of one of the country’s most successful boxing clubs were delighted to return to training this week.
The easing of Covid-19 Level 5 restrictions allowed Clonmel Boxing Club and sports clubs throughout the country to resume underage non-contact outdoor training in pods of 15, a move that has been welcomed by club coach Martin Fennessy.
“These are hard times but we’re hopeful and we’ll be resilient,” he says.
The club recommenced outdoor activities last Monday night with the emphasis on circuit, fitness and skills training.
“It will get the kids active again and back into a routine three nights a week, weather permitting,” says the coach.
“They’ve been out for so long that we’ll have to come back at it gently. It will give them a bit of a lift.
“They’ve only recently returned to school and I’m sure their parents will be delighted to have them involved with the club again.”
The club’s remarkable run of success has seen its boxers claim several county, provincial and national titles over the years, while four-time Irish elite champion Dean Gardiner and European champion Ellie Mai Gartland have also made their mark on the international stage.
However Martin Fennessy is concerned that some boxers won’t return because of the long lay-off enforced by the pandemic.
“Over the years we have had more than 100 boxers in training through a season.
“But we only expected about 15 back at our first outdoor training session.
“We’ve been told not to take on any more members until we get back indoors.
“We had several senior elite boxers before the start of the pandemic.
“Dean Gardiner was due to take part in the Olympic qualifiers but when they were postponed because of Covid-19 he announced his retirement at the beginning of the year.
“Ellie Mai Gartland trained away on her own but Ireland didn’t send a team to the world U18 championships, which are taking place in Poland.
“Raymond Joyce was selected on the Irish team for the European championships in Georgia but they didn’t happen either, while Jerome Lonergan and Shauna O’Keeffe haven’t been active for the past year.”
Martin Fennessy said the club sent out individual training programmes to its boxers but he acknowledges that “it’s not the same.
“Training collectively is what gives the kids a boost. They see the elite boxers and they want to be like them.
“We hope to get back to indoor training before too long and build a rapport with the kids again.”
However, being an indoor sport, he believes that boxing will be one of the last sports to return to normal activity, and that competitive boxing won’t return until next year.
“We have some great young kids and we hope they’ll come back.
”We will definitely lose a few but we’ll build it up again.”
Some clubs throughout the country have been forced to close their doors permanently, a consequence of their inability to pay the rent once Covid-19 put boxing into cold storage.
“The rent for some clubs is €10,000 a year and they couldn’t raise the money,” says Martin Fennessy.
However Clonmel Boxing Club is in a more fortunate position. Its headquarters at the complex in Elm Park has been refurbished and “is looking great,” according to Martin.
He says the club is also fully compliant with the IABA (Irish Athletic Boxing Association) Covid-19 protocols.
“A huge amount of work” had taken place in the background to facilitate the return to training, especially by club secretary John Mackey, Martin added.