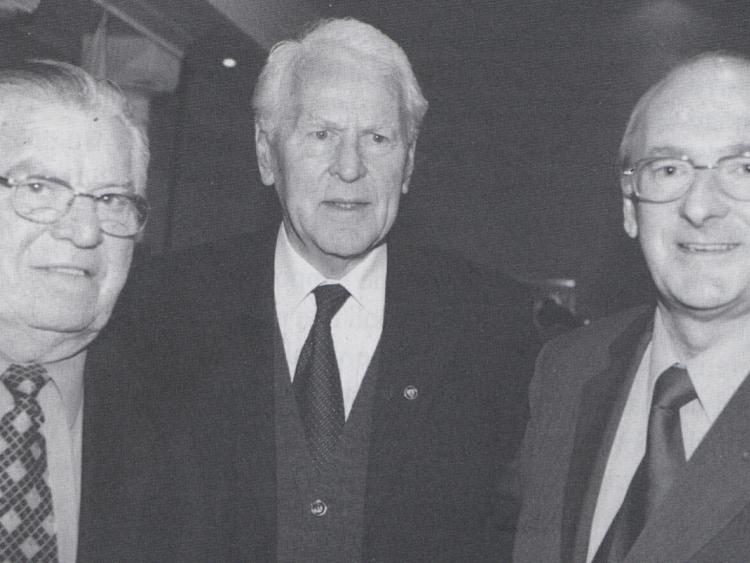 Founders of Féile back in 1971. Tommy Barrett, Seamus O’Riain and Eamon De Stafford

This year marks the 50th anniversary of Féile na nGael which was started in Thurles in 1971. The main aim of Feile was to increase youth participation in our native games. The festival was founded by Tipperary County Secretary Tommy Barrett, former GAA President Seamus O’ Riain and Tourism Officer for North Tipperary Eamon De Stafford.
The central idea was that the other thirty-one counties would be invited to Tipperary for a week-end to compete against clubs from all over Tipperary. Getting the Feile up and running every year is a big task and would not happen if it wasn’t for the countless volunteers who really are the strength of our association.
The first Féile took place on the weekend of July 16- 20 1971. All the participating teams took part in a parade and marched through the town of Thurles wearing their club colours. The teams carried a banner to show the crowds lining the street, the county they were representing.
A GAA museum was set up in the town, among the items on display at the museum were old hurleys and sliotars and the jersey worn by Michael Hogan when playing for Tipperary at Croke Park on Bloody Sunday.  It was a busy weekend of hurling in Thurles and the first Féile set the scene for years to come. The winners of the four divisions in 1971 were Blackrock, Comeda, Dungiven and Portroe. All the other counties cooperated fully with Tipperary to ensure the Feile was a success. They arranged their own competitions to select the best team to travel to Tipperary for the weekend.
The Féile has grown from strength to strength over the years and is a highlight in the GAA calendar each year. Féile is probably the most prestigious competition at underage level and it is a great honour for counties to host the festival.
Tommy Barrett outlines his hopes for marking this historic occasion:
“At the heart of Féile na nGael was fostering a love of our games among our young people. Successful teams in the first year of Feile included Comeda (Antrim) and Dungiven (Derry). I am sure the experience of travelling the long distance to play in the home of hurling was a real highlight for these young people. Also, the experience of taking part in Feile gave these clubs a boost and helped to increase participation in weaker counties. I have contacted GAA Headquarters and Tipperary County Board asking that the 50th anniversary of Féilebe marked appropriately. It is my firm believe that any such celebration of Féile should take place in Tipperary where it all started. Of course, Covid 19 restrictions will impact on any such events and I acknowledge that it is hard to plan in these uncertain times. It would be great to see the teams who won in the four divisions of Feile in 1971 recognised and celebrated. Perhaps if we are lucky enough to have a Munster Final in Thurles this year it would be a nice gesture at half time to have a short game between the underage teams of Blackrock and Eoghan Ruadh. I trust that our Gaa officials in Tipperary will not want the 50th anniversary of Féile to pass without us marking it in Tipperary”
Any pictures/programmes/ memories of the first Féile can be sent to tommybarrett1213 @gmail.com.