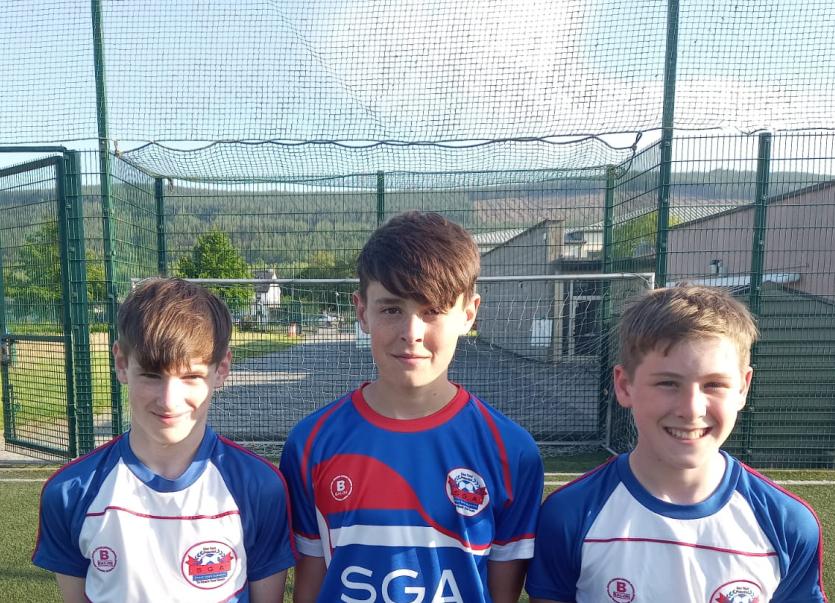 Above: Three Slievenamon Celtic players who have been members of Soccer Goals Academy for the last two years and have recently been selected for the Tipperary U14 squad. From left, Dylan O’Donoghue, Euan Rumble and Gus Nolan

Player development is the main objective of an independent soccer academy that now has more than 100 members, having started with just 16 two years ago.
Soccer Goals Academy coaches boys and girls from 4-16 years of age in Clonmel, Cahir and, from yesterday (Friday) in Tipperary Town.
The academy is run by Clonmel man Tommy Kiely, who holds a UEFA B coaching licence, and who is assisted by fellow qualified coaches Jack Moore, Eamon O’Dwyer, Stewart Freeland and Tommy’s mother Jacinta Mullins, who is also the child welfare officer.
Tommy says that Susan Cahill’s support and help behind the scenes and her role in administration has also played a huge part in the academy’s continued growth.
“Players who become members will develop from their current level to a better level, depending on their commitment, and become more educated and confident when they enter the field in a match-type situation,” says Tommy.
“We have members who have never played before and others who are involved with different clubs in the area and different clubs in other counties,” he says.
“Having the coaches at the level they are at speeds up the development of the player.
“When the player and the parents see the results they are more committed, enabling the player to develop more and to be more confident when demonstrating their skills for their clubs.
“All the coaches are very passionate about our objective and very good at what they do.
“The layout of the academy programme focuses on one main topic every month, from dribbling, attacking, defending, shooting and ball control to speed, football fitness, possession, goalkeeping and more.
“Player development is our main objective,” says Tommy, who also finds the time to help out in coaching Clonmel Celtic’s U13 team.
He played schoolboys football with St Oliver’s in Clonmel and also lined out with the junior teams of Clonmel Celtic, Wilderness Rovers and Old Bridge in the Tipperary Southern and District League (TSDL). 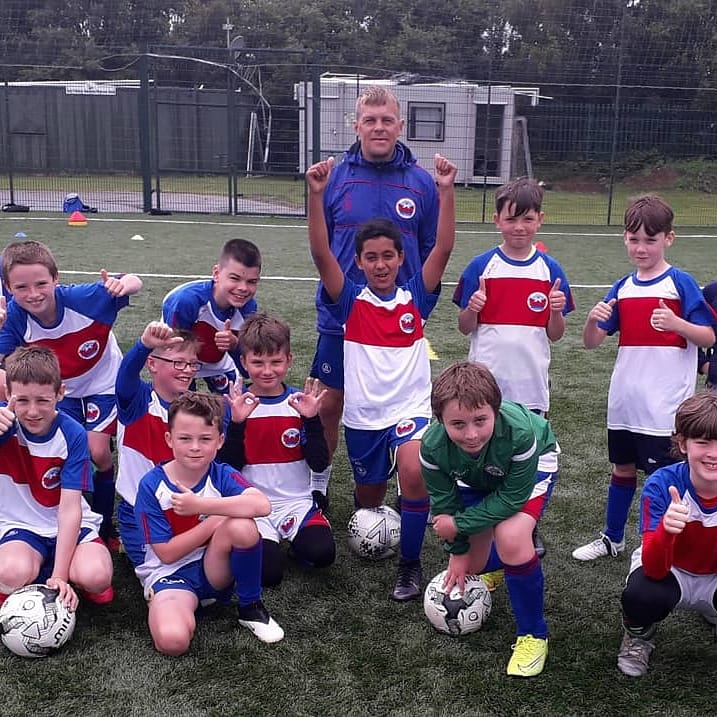 Above: Coach Tommy Kiely with some of the academy members

Tommy says he took this course to benefit the members of the academy both on and off the pitch with the academy’s online training, to offer more value to the overall development of the players.
“Coaching the player to reach the highest level the player is capable of reaching is our goal.
“Consistent action from the player is key in reaching that goal.
“A positive environment is key for that consistency to be developed to reach its highest standard.”
Tommy says that Soccer Goals Academy takes pride in creating a positive environment so the players can develop at a faster pace.
Depending on their availability, the coaches are also available to link in with other clubs that struggle to get volunteers to take certain age groups.
They can also take private, small group training involving a maximum of eight players.
Tommy and fellow coach Eamon O’Dwyer also volunteer with the Tipperary Schoolboys Academy, helping develop teams for competitive matches against other counties for the Kennedy Cup Competition.
Players who enrol in the Soccer Goals Academy are coached for a minimum of three months, with the option of more, with each player also receiving access to an App for home training.

Three groups are coached on Fridays and another group on Monday at Clonmel Celtic’s home ground.
Another group meets in Cahir on Tuesday evenings at 5.30pm and a new group started in Tipperary Town on Friday evening at 5pm.
Some places are now available in the academy in all three towns.
Any parent who has a child interested can apply for a free trial at any of these venues.
The high performance group also does live Zoom training five to seven times a year; during lockdown it was every week.

In these online sessions the group discusses different behaviours on and off the pitch that players can improve on, to improve their performance and their lives in general.
“A player that has great ability and is not tuned in mentally doesn’t work from our experience,” says Tommy.
“Having a good attitude and a positive reaction to disappointments is priceless and needs consistent work.
On our mindset training, players get the opportunity to learn about reactions and good behaviours and can share things that they struggle with, so we can help dissolve the issue so it doesn’t pile up and hinder their performance and individual growth.

“We also do tactics board training to help players understand more about their roles and responsibilities within the position they play for their clubs.
“Everything a soccer player needs to develop properly is available to them in Soccer Goals Academy,” says Tommy.
“A lot of very good players that played in the areas we work in could have played at a higher level. The academy was created to see if we got some of that talent from this generation, and have those players apply what we do consistently every week to see what the outcome would be like.
“On the other hand, to get a player just to kick a ball correctly can be a huge achievement if that’s something they couldn’t do previously.
“We cater for all levels and any bit of development a player makes with us is a success if it’s something they have never done before."
For more details check out the website https://soccer-goals-academy.mykajabi.com