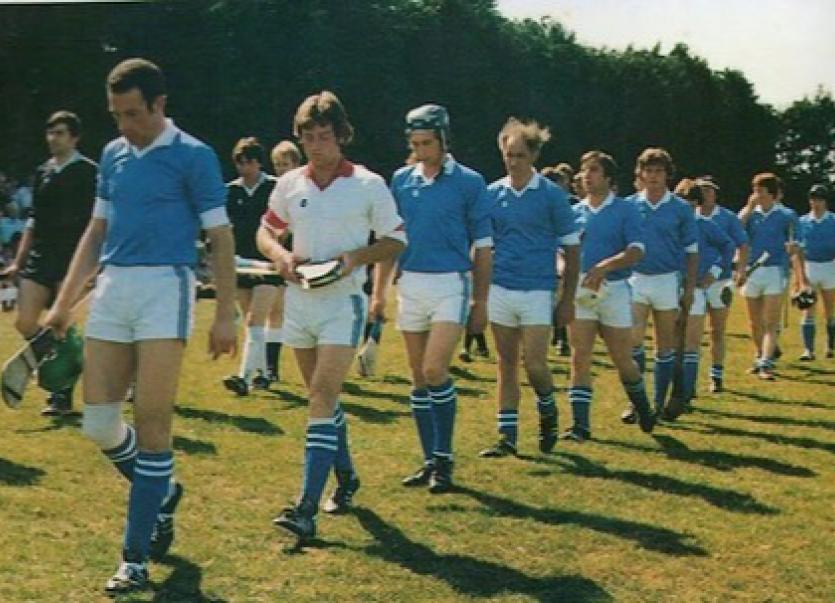 Fortunes would begin to turn for Mary’s with the dawn of the new decade in 1980, strong underage hurlers of the previous decade getting to the pitch of the cut and thrust of the adult grade.
1981 would become the crowning glory for this team. The main characteristics of the day are well-known by those familiar with the story: A swelter of a day in Kilsheelan, a packed crowd adding to the intensity of the occasion, a late flourish to seal the victory, the influence of former Limerick inter-county star Mossy Carroll .
The Nationalist newspaper match report chronicles the ebb and flow of the match day action, a tight affair from start to finish punctuated by key moments, the balance of which were to fall in Mary’s favour- a save by Vincent Mullins, an unerring performance from placed balls by the teenage Willie Peters, the Tommy Walsh goal early in the second half that gave Mary’s the lead for the first time in the game. All of which set the game up to be decided in the closing stages; with the game finely balanced at 1-12 each it was a Willie Peters free followed by a Mossy Carroll long-range effort that sealed the day.
The Aftermath
Again going back to The Nationalist report, it opened with “A new chapter in the proud history”; unfortunately the core of this team would go on to lose three south finals in subsequent years- 82 to St Augustine’s, a combination of Fethard and Kilsheelan, ’85 when Carrick Swan would take their revenge with a 2-10 to 1-9 victory and finally in 1988, where Killenaule would run out comfortable winners before the club as a whole drifted backwards.
As St Mary’s regressed from competing in south titles as the 1980s wore on to a barren spell in the 90s, Mullinahone would become a new force in south senior hurling and St Mary’s would eventually drop from the senior grade in 2002. A frustrating era followed as a talented group could never muster a south title but with fortunes finally beginning to turn with Sean O’Meara as manager, a new core of younger, talented players and a first south intermediate title in two generations won in 2011. Mary’s competed strongly in the grade in the following years, eventually maximising potential with a county intermediate title win in 2017, triumphing in the final against Gortnahoe- Glengoole on a day well- remembered for sterling performances from players such as Jamie and Ross Peters, Jason Lonergan, Seamus Kennedy and Richie Gunne but more so for the coherent style and team effort apparent in a slick win.
This win was no doubt built on the strong resurgence of teams at juvenile level, the crowning moments being back-to-back county minor A successes in 2015 and 2016, teams that now feed many of the adult teams but are undoubtedly major milestones in the club in their own right, with Matt Barlow’s two-goal salvo to down Kiladangan in 2015 followed by a star turn from Niall Hoctor in 2016 to break JK Brackens hearts.
Although progress at senior ranks has been frustrating to date, and we continue to look to the golden generation of 2015/16 to emulate the successful teams of the 70s and 80s as they reach their peak years, the club continues to hope for a second South senior championship and more halcyon days of clashes against traditional rivals such as Carrick Swan.

Tipperary hurlers receive timely wake-up call ahead of the championship