‘Kerry are on a mission’ while Tipperary need a big performance 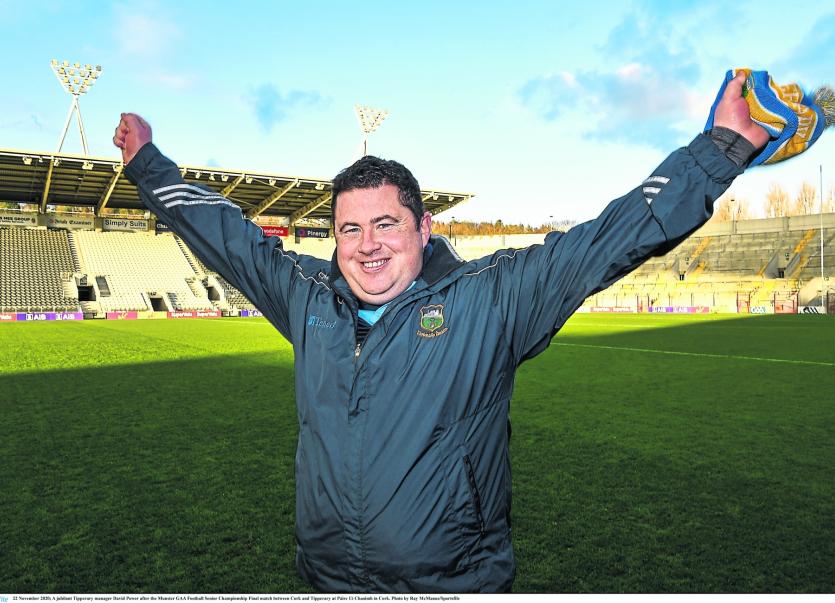 Reigning Munster senior football champions Tipperary begin the defence of their title on Saturday next against Kerry in Thurles and the home side will need to produce the shock of the football century if they are to extend their reign as provincial champions beyond a mere 32 weeks.
Having finally grasped the Munster title last November for the first time in 85 years, very few, if indeed anyone at all, would give Tipperary a prayer of beating Kerry, and it’s easy to understand why. All the indicators past and present point in just one direction.
For a start Tipperary haven’t beaten Kerry in Munster since 1928 and have failed to overcome ‘The Kingdom’ on no less than 43 attempts since then. Tradition in sport is often a good head start.
But more immediately Kerry have gone through this year’s Division 1 league campaign very impressively, winning all their games and drawing with reigning All-Ireland champions Dublin, ultimately sharing the league title with them when the decider ultimately wasn’t played.
In contrast Tipperary suffered relegation from Division 3, losing all their games except for a laboured home victory against Wicklow in Thurles, ultimately losing out badly to Longford in a relegation play-off.
So it’s no great surprise to anyone in sport that the bookmakers have Kerry at an unbackable 50/1-on to advance to the Munster final against either Cork or Limerick later in the month.
It has all left the Tipperary backroom team with a mountain the size of Carrauntoohill to climb to even believe again after the dismal league run but according to manager David Power things are improving once again just at the right time.
“In the last couple of weeks our training has actually gone very well. We gave the players a week off after the Longford game as it was a very tough league. You learn more about yourself as a manager, as a coach, and it has been a tough couple of weeks because I suppose there was an expectation there that we should have been at the other end of the league but for one reason or another things probably went against us and that’s sport. 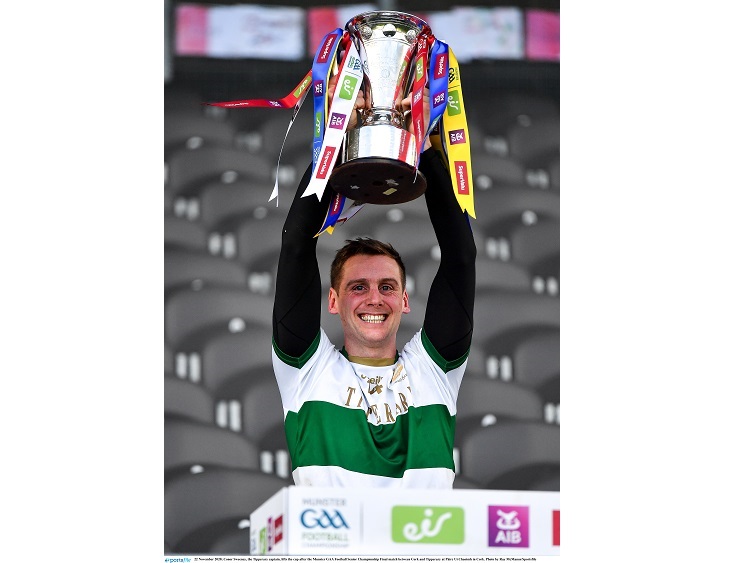 Tipperary captain Conor Sweeney with the Munster Cup following last November's win against Cork in the provincial final. That title is on the line on Saturday at Thurles when Kerry come to town.

“However, in the last couple of weeks, especially in the last four or five sessions, training has been very good. Since the first session we have been talking about Kerry, no disrespect to Clare. It looks like Kerry are really on a mission and so we have been preparing really hard. We have a couple of bodies back which is making things easier. The likes of Bill Maher is fully back, and Robbie Kiely is after making a kind of Lazarus return. He’s fully back now as well and all of a sudden you’re getting bodies back you didn’t expect and it is giving everyone a lift and I think it is after giving a lot of the players a lift as well,” said the Tipperary boss.
There has been no time wasted wallowing in self-pity or the likes and Tipperary have been busy in the intervening few weeks since the Longford relegation defeat.
“We played Laois and Cork in challenge matches and noticeably these games were way better performances than what we had been doing in the league.

“There was no one more disappointed than the management and the players with what happened in the league but as I have always said football is never a straight line and it’s not actually. There are always ups and downs. We had a great up last year, now we have a down, but we must learn from it. But I have been very impressed with the players’ attitude over the last couple of weeks.
“We played Laois in Portlaoise and we played Cork in Páirc Uí Chaoimh last Saturday (week) and that was the first time that Bill Maher and Robbie Kiely played a half each, and that gave us great confidence,” said David.
The Kilsheelan/Kilcash clubman continued: “We have been blooding some young lads as well and I suppose the big highlight this year has been Conor Bowe who has been outstanding to be fair and he’s really been top class.
“While we lost both challenge games by a couple of points we were way more ‘at it.’ Even in Division 3 in the Wicklow game I just felt we were just not ‘at it’ this year for one reason or another. I feel for the last couple of weeks there’s been a different energy and a good focus there,” added David Power.
Continuing he said: “Look the big thing is, and I am not going to be coming out saying we are going to be beating Kerry on Saturday, but the one thing I think I can nearly guarantee is we are going to get a good performance from our players,” added the Tipp boss.
Team management at the best of times is a very difficult job, and David Power has experienced some great days and some disappointing days standing on the sideline trying to drive his teams on. You take the highs and the lows as they come, but win or lose, this manager always demands the best from his side that they can possibly give.
“Against Kerry I am expecting a very good performance that I know the players are more than capable of delivering. If we can get to our top level of performance, who knows? In any sport, if the opposition has a bad day, you never know, you might be there or thereabouts if you can produce your best on the day. 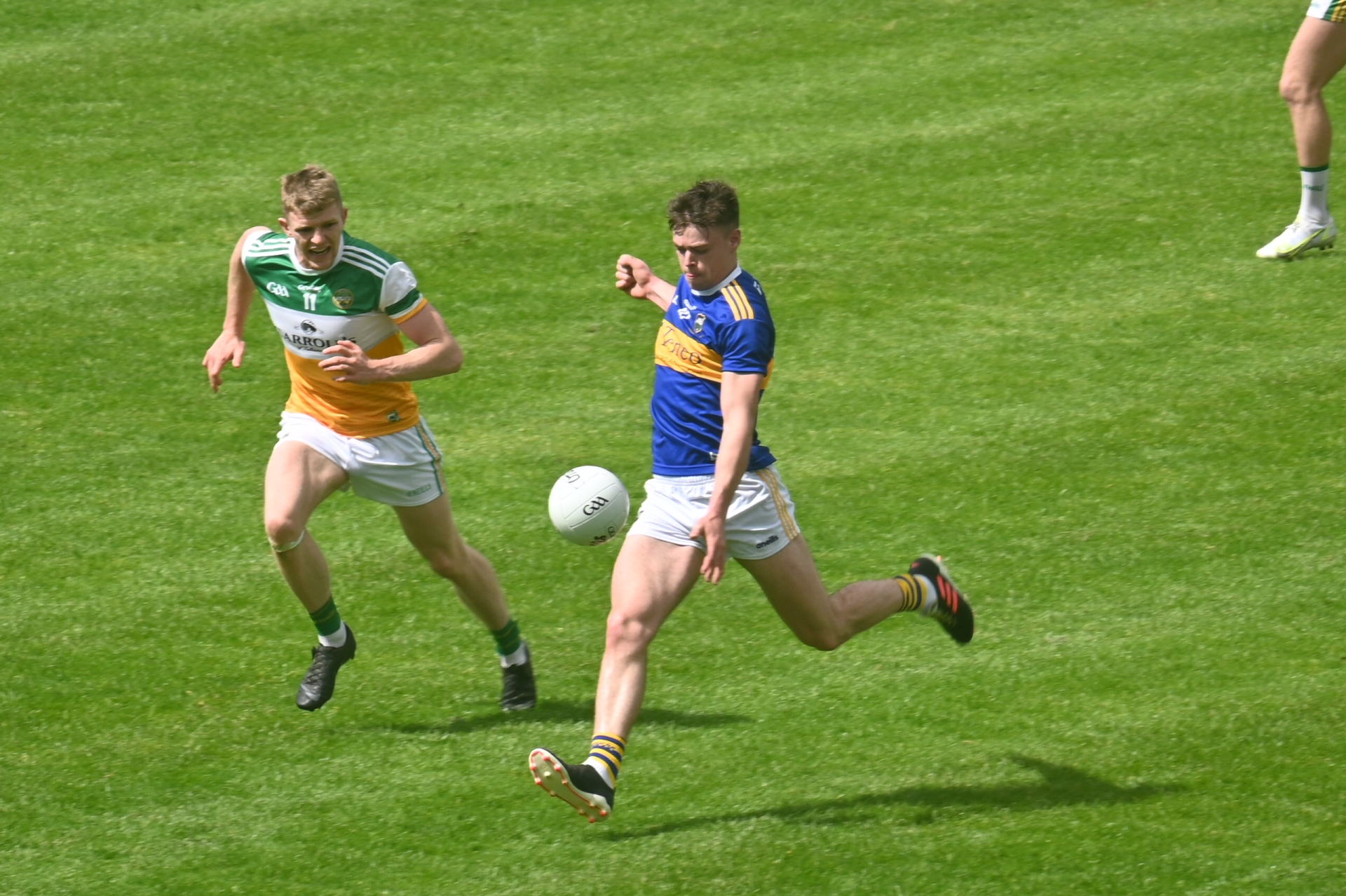 Conor Bowe who is expected to make his senior championship debut for Tipperary against Kerry on Saturday.

“This team is really capable of competing against this Kerry team. Kerry have their own frailties as well, like defensively, I think there are still question marks there. So for us for Saturday it’s about us getting the right balance between our defensive play and our forward play. And also making sure that our transition play is smooth because throughout the league we were turning over way too much ball and that’s a thing we’ve been working hard on in training,” he said.
The one thing that plagued Tipp more than anything else during this year’s four-game league campaign which included defeats to Limerick, Offaly and Longford, was the concession of turnovers. That malaise will have to be remedied before ‘The Kingdom’ comes, and David Power fully realises that.
“I would say that when we have the ball it’s so important that we hold onto the ball and not to be panicked on the ball by Kerry. If that means going from side to side, so be it and well, Kerry don’t have the ball then. We’ve been drilling that into the lads all the time.
“And the other big thing is when we do get into a shooting opportunity, we must make sure that the ball goes dead, whether it’s a wide or a point or a goal, the ball must go dead. Obviously we are at our most dangerous when we have the ball but when we get turned over with bodies going forward, then we are quickly open and at our most vulnerable. Kerry will be expecting us to turn over the ball so that’s what we are looking at avoiding at all costs,” he said.
Saturday’s game is the proverbial David v Goliath clash, the Tipperary manager aptly named for such an encounter. Kerry are like a hurt animal since their shock last-minute defeat to Cork in last year’s Munster final. They cannot get back to a provincial decider fast enough to right that self-perceived injustice. Tipp are in their way now and there will be no standing on ceremony for the reigning champions as far as Kerry manager Peter Keane is concerned.
Tipperary, even though they are the reigning Munster champions (why not keep repeating that term, as it may be a while again before we get to use it again) will have it all to do to contain that Kerry hurt and hunger, even with the advantage of playing at Semple Stadium.
David Power continued:
“It looks like Kerry are on a mission and want to beat everyone in Munster, they can’t beat them by enough it seems. But at the same time they have yet to be tested. And during the course of any championship, every team will have a game where it does not all go their way for them, and that’s what I am saying to you. If we can get a performance who knows, we’re in Thurles, there will be some bit of a crowd there, 500 or whatever it’s going to be. At the end of the day we are defending Munster champions and we have to make sure that we put in that performance. We have something to prove now, the league hasn’t gone our way so this is a game that we need to perform to show the people of Tipperary that this is a good team,” he concluded.

Throwback Thursday - Remembering the summer of 1996 in Tipperary