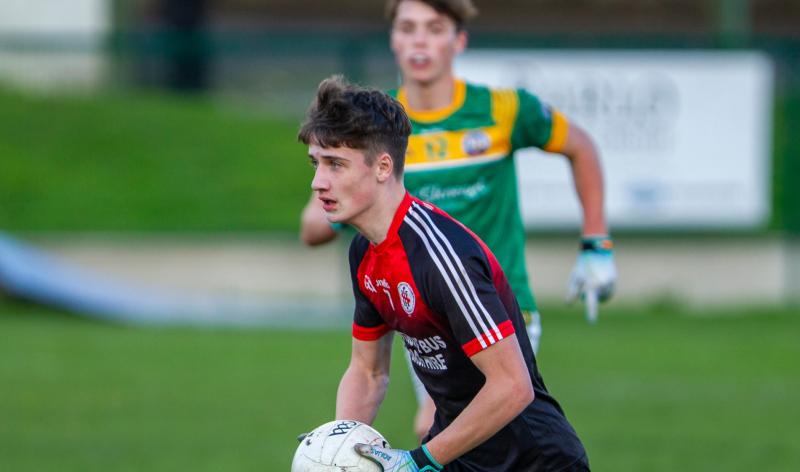 Clonmel High School's Jack O'Neill (Ardfinnan) in action against last week against Kerry side Rathmore in the Corn Uí Mhuirí.

The High School senior footballers fell to an agonising defeat at the hands of Pobalscoil, Sliabh Luachra of Rathmore at the Kerry venue in the preliminary quarter-final of the Corn Uí Mhuirí on Wednesday of last week, as a goal six minutes into stoppage time broke the hearts of the Clonmel side.
Having been well beaten by St Brendan’s of Killarney in their opening match, the High School travelled in hope of redemption. The Rathmore school had easily accounted for Pobalscoil Chorca Dhuibhne in their opening tie so they entered this as the warmest of favourites, as the Clonmel side were without some key players through injury.
Two points down, the High School’s Senan Butler split the posts in the 10th minute with a superb effort. Another Rathmore point was replied to by a Cian Smith score before a succession of High School wides saw the Tipperary side end the half 0-3 to 0-2 in arrears.
On the resumption, it was the Tipperary school who opened the scoring, as Ruairí Leahy curled over a fine score before The Nire’s Chris Ryan gave the High School the lead for the first time. Rathmore responded with two points to lead 0-5 to 0-4 as the game opened up. Chris Ryan again levelled matters but approaching the water break, ill discipline on behalf of the High School saw them punished as Rathmore tagged on five points, and with 10 minutes remaining it seemed that the Kerry side were destined to win. 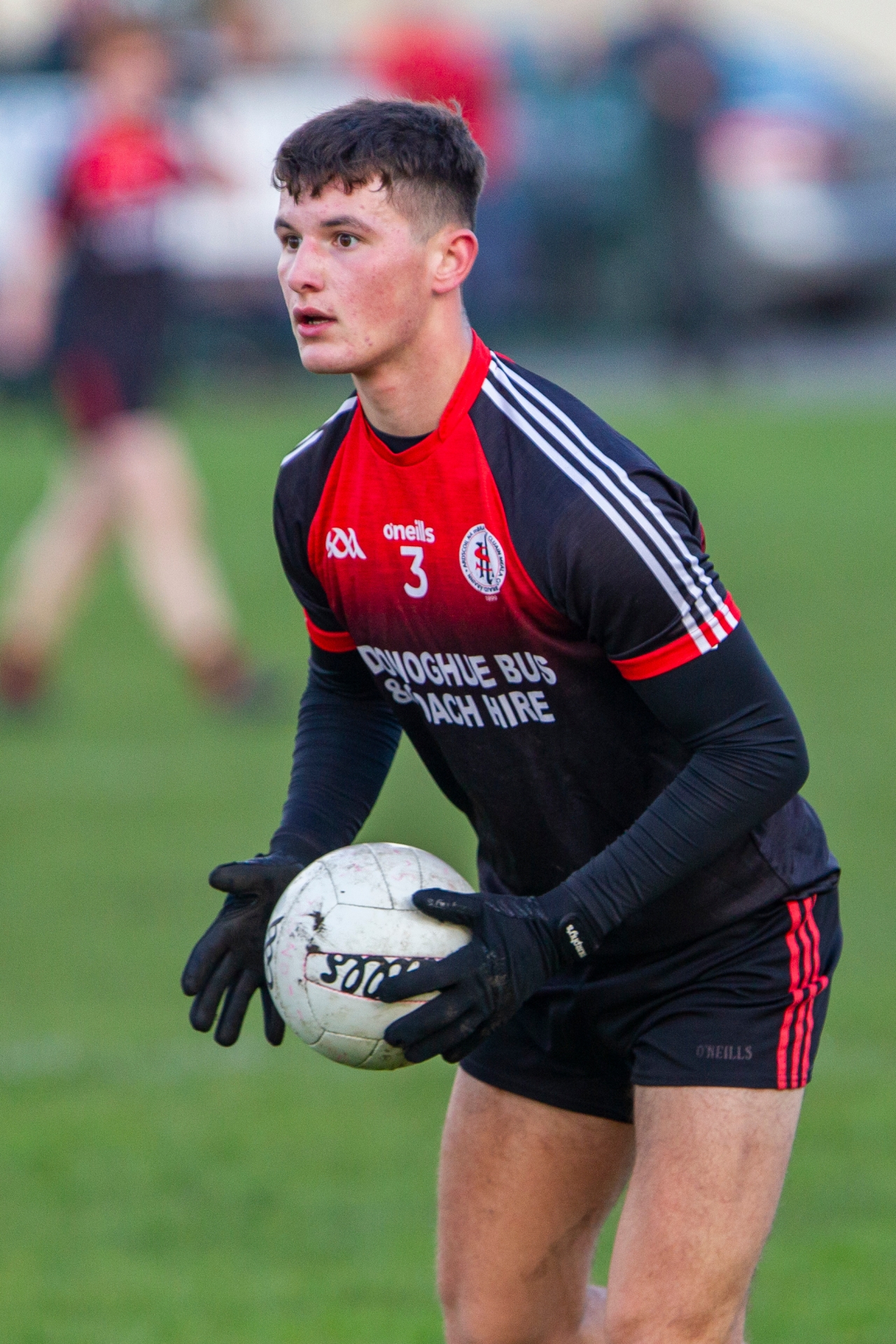 Clonmel High School's Ross Slattery (Clonmel Commercials) on the ball against last week against Kerry side Rathmore in the Corn Uí Mhuirí.

However, the High School refused to lie down and the late introduction of Waterford minor Oísín Walsh slowly started to turn the tide in favour of Clonmel. A Cian Smith free reduced the margin to four before an opportunistic goal by Clonmel Commercials’ Rory O’Dowd left the minimum between the sides with just two minutes to play. Rathmore were now struggling to win primary possession, with Fionn Hallinan and Dean Cagney in control at midfield and when Conor Parker equalised from a free he had won himself two minutes into stoppage time, it seemed that the large crowd in attendance would be treated to extra-time.
From the resulting kickout, there was no whistle from the referee and the game continued, as Clonmel won the breaking ball and worked the ball to captain Emmet Butler who, under pressure from two Rathmore defenders, landed as fine a score as you would see to silence the vocal home support and put the High School in the lead on a scoreline of 1-8 to 0-9 with 64 minutes played. The game continued and as the clock entered the sixth minute of stoppage time disaster struck as the Kerry side goaled with the last kick of the game to the despair of the away side.
For the High School, Shane Ryan was excellent in goal with Ross Slattery, Emmet Butler and Eoghan Walsh excelling in defence. Fionn Hallinan and Dean Cagney had a formidable battle at midfield while upfront Chris Ryan contributed most. The High School’s Munster campaign is cruelly over but they will look to retain the county senior championship when they play Thurles CBS in the coming weeks.
Team: Shane Ryan (Moyle Rovers), Callum McFadden (Grangemockler), Ross Slattery (Commercials), Emmet Butler (Kilsheelan), Eoghan Walsh (Commercials), Niall O’Connor (Clonmel Óg), Rory O’Dowd (Commercials), Fionn Hallinan (The Nire), Dean Cagney (Commercials), Jack O’Neill (Ardfinnan), Senan Butler (Kilsheelan), Ruairí Leahy (Commercials), Conor Parker (Commercials), Chris Ryan (The Nire), Cian Smith (Commercials).
Sub used: Oísín Walsh (The Nire). Subs: Shane Ryan (Commercials), Killian Butler (Moyle Rovers), Rían McCormack (Moyle Rovers), Evan Spellman (The Nire), Rory Maher (Commercials), Ben O’Dwyer (Commercials), Anthony Keeley (Commercials) James Morris (Commercials), Dean English (Moyle Rovers).