Tipperary SHC: Loughmore are half way there, but Sars' stand in their way....again 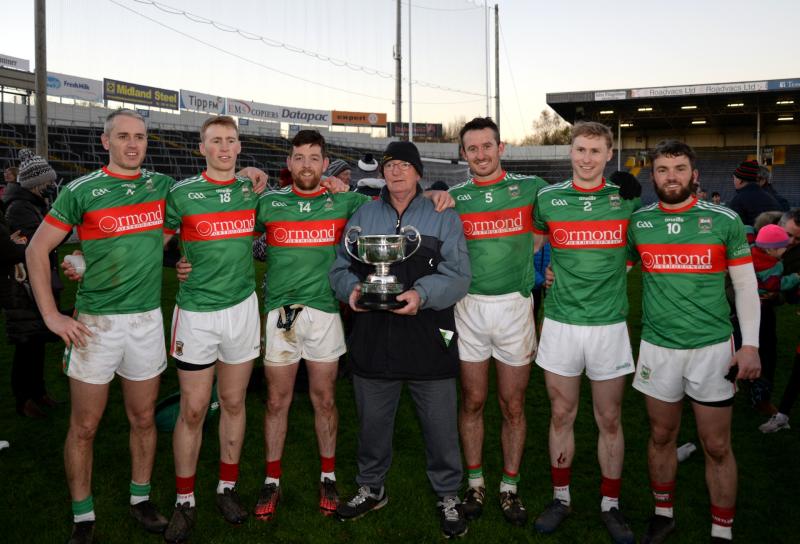 Loughmore Castleiney players celebrate after the football final on SUnday - but, will they be celebrating on the double next Sunday?

Last year’s scene of the crime became this year’s cathedral for Loughmore Castleiney as they reversed the 2020 county senior football final result to score a stunning victory over three-in-a-row seeking Clonmel Commercials on Sunday.

And, they will return to the Field of Legends twenty three days short of Christmas in search of an early Yuletide gift by wrapping up the replay of the FBD Insurance county senior hurling final on Sunday. Of course, standing in their way - mid champions Thurles Sarsfields who felt enormous relief at the final whistle in the drawn game. The feeling was that they had gotten out of jail - the big question is; was it temporary release or will they receive the full sentence when the final whistle sounds.

What magnificent scenes of jubilation greeted the finale of the football decider last Sunday. Loughmore Castleiney, courtesy of a John McGrath late goal, snatched victory from the jaws of defeat. Again, it was a victory which did not seem on the cards after the first quarter when they trailed the defending champions having endured yet another very slow start to the game.

But, they clawed their way back into the match - as they did in the hurling final - and struck that late late goal to snatch the O’Dwyer Cup from the grasp of the Commercials players who were left smarting at the final whistle - referee Derek O’Mahoney suffering the wrath of a number of players and mentors as he made his way off with the principle accusation being the imbalance in the free count - it was 27-11 to Loughmore.

But, that’s all academic now. Loughmore Castleiney are champions and that magnificent spirit which has been lauded, steeped in lore and captured in so many soundbites and columns has won the day again. It just looked as though they had made a pact - Defeat? Not this year - not again. They simply refused to be beaten and they had that over their opponents who will be disappointed not to have closed out the game.

So, can they add the Dan Breen Cup to the already secured O’Dwyer one? Well, it's a brave punter would bet against them.
Loughmore Castleiney will not be feeling any fatigue this week. The legs will be full of running; the mind sharp and the senses in top gear. That’s what winning does and they will bounce into Semple Stadium on Sunday with only one thing in mind - winning the double again.

The momentum gained by the football victory will be worth something to them. And, they will hope to include the injured John Meagher (hamstring) and Brian McGrath (thumb) for the hurling final. Brian made a brief appearance at the tailend of the football final - ironically, it is far more straight forward to hurl with a broken thumb than it is to play football.

Sarsfields have been under the radar since the drawn game. They have gone away, re-grouped, re-charged the batteries, recalibrated their focus and made their plans for the replay. And, the big thing is that they will have had two weeks to do so.
Sarsfields will be more than aware of the challenge which faces them on Sunday. But, thoughts of preventing the double will be far from their minds - instead they will be honing in on just winning their 37th county senior hurling title.

Sarsfields will need bigger games from more of their men in the replay and they will be more than aware of the need to make any period of dominance count. Their fine spell in the drawn game, perhaps came too soon and they were to lose all three quarters, after the first. A repeat showing on Sunday will surely end infailure.

The flip side of that scenario of course, is that Loughhmore Castleiney cannot continue to give teams sizeable leads and expect to keep reeling them in. Eventually, such early game inertia will prove fatal and they will acknowledge the need to get out of the traps muchmore quickly.

Expect the replay to be a much different type of game. It will be a very tactical affairwith match-ups and placement of players being well thought-out with the hope of executing the gameplan. Will Sarsfields try something different like start Billy McCarthy to win ball in the half forward line? Or, will they use the expanses of Semple Stadium far more than the did in the replay?

Will Loughmore Castleiney go with Noel McGrath in the forward line, or midfield? Where will John start and who will pick him up? How will Sarsfields curb Ciaran Connolly’s influence? And, can John Meagher and Ronan Maher shake off knocks to make a big impact?

It’s all to play for.