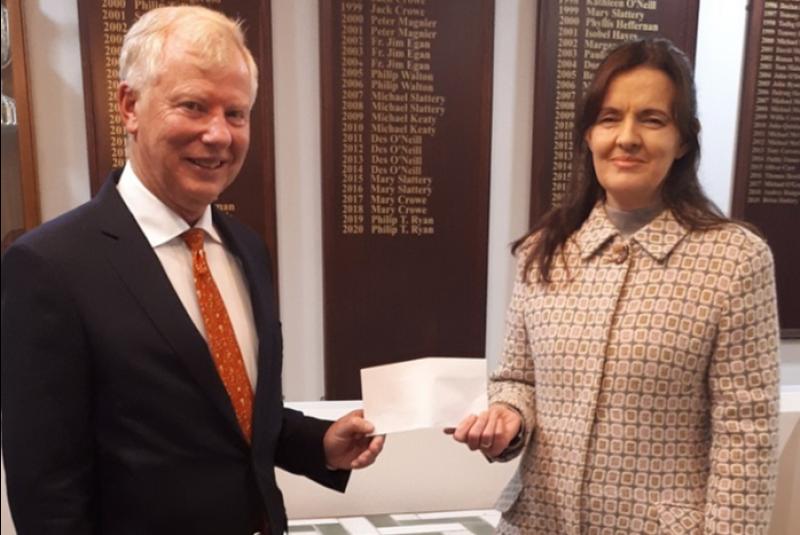 Captain of County Tipperary Golf & Country Club Tony Reade presents a cheque for €1,200 to Mary MacNamara, South Tipperary Hospice, the proceeds of the Carroll Cup, which is run every year in memory o

Winter League
The Winter League has come to an end after a very successful run with excellent participation. The format was a four man team event, with two singles, a four man scramble & 2x2 balls played over 9 holes.
The winning team with an excellent score of 228pts were; Vice Captain Brian Slattery, Kevin McCarthy, John Ryan (Bob) & Don Kennedy. In 2nd place with 222pts were; Martin Maher, Sean O’Connor, John Ryan (Con) and Damian Fogarty. In 3rd place with 218pts were; David Burke, Joe Burke, Shane Stapleton and Tom Shanahan. Well done to all concerned on some fine scoring.
Nine Hole Stableford
Our competition for the coming weeks will be a 9-hole Stableford with a €3 entry fee & re-entry as often as you wish at €3. All entries must be through the Golf Shop and cards posted in the men’s box. Once 30 scores are in the competition will be closed and a new 9-hole opened. All the money taken in will be paid out in prizes.

LADIES GOLF
The winter League semi final returned very exciting results with both the two top teams returning 89pts each. The competition is very keen among the ladies playing in the final of the winter League. Team No 2. “The Sparrows” Libby Ryan, Jenny Lawrence, Ann Blake, Flan McGlinchey (captain), Catherine O’Halloran, Gina Shanahan & Dorothea Hannigan; with a total of 89 pts and Team No. 8 “The Parrots” Michele Crowe, Pauline Walsh, Patricia Moran, Jacinta Coman (captain), Vera Heffernan & Judy Hayes also on 89 pts.
The final of the winter league will be from the Sunday, November 28 to December 10.
Christmas Hamper ongoing
Our Christmas Hamper is ongoing and you can enter as often as you like with the 2 best cards to count.
Minor Alliance win for Jacinta
Congratulations to Jacinta Coman on winning Minor Alliance on Monday last and to Catherine O’Halloran who also featured.
Tuesday morning golf
Tuesday morning’s golf continues next week unfortunately heavy frost put a stop to last week’s outing.