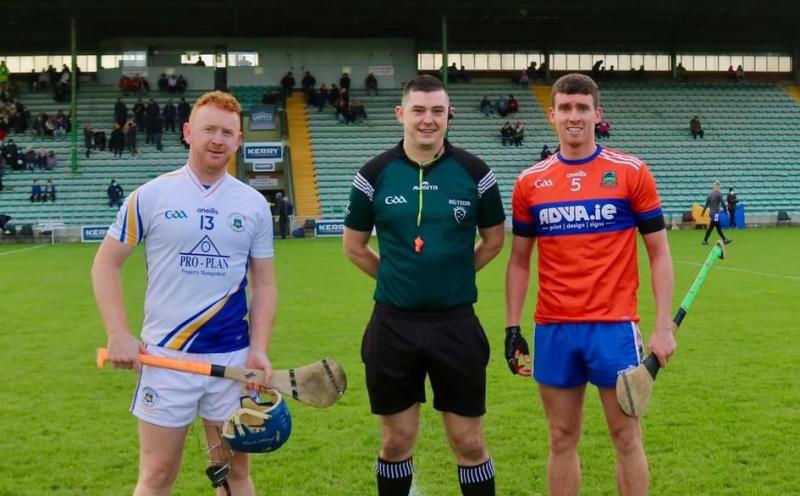 Tipperary champions Skeheenarinky are through to the semi-finals of the Munster Club junior hurling championship, after they beat Tralee Parnells by 1-22 to 0-8 at Austin Stack Park last Saturday.
They now have a home game (with the venue to be decided) in the last four to look forward to on the weekend of December 11-12, when they’ll meet Ogonelloe from Clare.
Ogonelloe beat Waterford’s Brickey Rangers by 3-13 to 2-13 in the other quarter-final last Sunday.
Playing against the breeze in the opening half in Tralee, Skeheenarinky made the early running, with Dean Finn landing his side’s first point from play in the third minute, before Noel Vaughan hit two more quickly afterwards to leave them three in front by the seventh minute.
The Kerry outfit responded with two good scores from play from their full forward Darragh Reen to reduce the deficit to one by the tenth minute, before Tomás Vaughan and Gearoid O’Doherty converted frees to leave Skeheen’ one ahead at the water break, on 0-4 to 0-3.
At this stage Parnells appeared to have weathered the early pressure.
However Skeheen’ started the second quarter better and a quickly-taken free by Tomás Vaughan found Conor Sweeney in space to allow him hit his first from play.
There was a first too soon afterwards for Darragh Brennan, and Conor Sweeney’s second point extended the lead to 0-7 to 0-3 by the 23rd minute.
Then Skeheen’ hit the key score of the day a minute later. Mikey Maher found Adrian English in a one on one situation on the edge of the Parnells square. He outfielded his opposite number before striking to the net to extend the lead to 1-7 to 0-3.
Skeheenarinky added two more points - Noel Vaughan from play and Tomás Vaughan from a free – to extend the lead further to 1-9 to 0-3.
Parnells then hit a mini purple patch at the end of the first half to hit four of the next six points to leave the half time score at 1-11 to 0-7.
The Parnells scores came from their captain Gearoid O’Doherty, who hit three (including two frees) and Graham Sheehy, while Skeheenarinky’s response came from two Tomás Vaughan points, one of which was a free.
Aided by the breeze and playing into the town goal in the second half, Skeheenarinky struck four unanswered points from Tomás Vaughan (two, including one free), and Adrian English and John O’Callaghan with one apiece.
When Tomás Vaughan pointed a 65 in the 37th minute, the lead had grown to 1-16 to 0-7.
Parnells hit the next score from a placed ball from Gearoid O’Doherty but that was their final score.
A free from Tomás Vaughan closed out the third period at 1-17 to 0-8.
Skeheen’ added five points in the final quarter – three from Conor Sweeney (two frees), Fionán O’Sullivan a free and one from play from Harry English to round off a comfortable win.
This competition has not been kind to Tipperary sides and Skeheenarinky are looking to become just the second side to win a Munster junior hurling title in the 20-year history of the competition.
Moyle Rovers were the other Tipp side to win the championship, when they beat Barryroe of west Cork by 3-10 to 0-9 in the 2007 final.
Skeheenarinky will be glad to have got this one out of the way and know they face a tougher test in the semi-final.
The other semi-final will pit Ballygiblin of Cork against Caherline of Limerick, with the final scheduled for January 8/9.
Skeheenarinky: Aidan Treacy, Seamus O’Callaghan, David Hyland, Eoin Morrissey, Fionan O’Sullivan 0-1 free, Riain O’Callaghan, Oisin Brennan, John O’Callaghan 0-1, Mikey Maher, Conor Sweeney 0-5 (2 frees), Tomás Vaughan 0-8 (5 frees, 1 ‘65), Dean Finn 0-1, Adrian English 1-1, Noel Vaughan (0-3), Darragh Brennan (0-1).
Substitutes: Harry English (0-1) for Adrian English (37 minutes), Paudie Fitzgerald for Mikey Maher (44 minutes), John Ryan for Seamus O’Callaghan (51 minutes), Christy English for John O’Callaghan (51 minutes), Aidan O’Donovan for Tomás Vaughan (54 minutes).
Tralee Parnells: Mark Ryall, Tim Kelliher, Tadhg Brick, Cillian O’Riordan, Graham Sheehy 0-1, Luke Barrett, Ciaran Breen, Tadhg Reen, Cathal Dunne, Andrew Morrissey, Brian Lonergan, Luke Chester, Gearoid O’Doherty 0-5 (3 frees), Darragh Reen 0-2, Ronan Gilsenan.
Substitutes: Niall Cassidy for Luke Barrett (29 minutes), Stephen Morrissey for Cillian O’Riordan (44 minutes), Paul Daly for Ronan Gilsenan (44 minutes), Ruairi O’Sullivan for Darragh Reen (50 minutes).
Referee: Ciaran O’Regan (Cork).