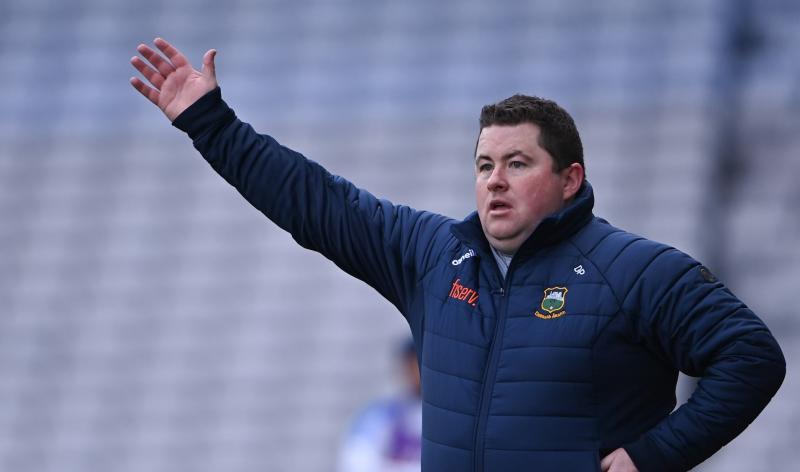 "Overall the performance was very good but Cavan got the two goals and they won the game for them," says David Power. Picture: Piaras Ó Mídheach/Sportsfile

Promotion from division three of the Allianz National Football League is good preparation for Tipperary ahead of the Munster senior championship quarter-final against Waterford on Saturday April 30, says Tipp manager David Power.
"We have had eight good games in the league, and it's four weeks out from the Waterford game," he stated after his side's narrow defeat by Cavan in last Saturday's Allianz National League division four final.
"We know that Waterford are waiting for us in the long grass and we're going down to Fraher Field in Dungarvan, which is never an easy place to go.
"Once we apply ourselves and go down with the right attitude we should be fine. We're more than capable of beating Waterford."
Reflecting on last weekend's one-point defeat by Cavan in Croke Park, he stated "I thought we were the better team in the second half but Cavan got the crucial score (Paddy Lynch's 62nd minute goal).
"There was a turnover in the middle of the field and they really punished us with that goal.
"Overall the performance was very good but Cavan got the two goals and they won the game for them."
Discussing the goal chances that his own side passed up, he said "In the very first move Mark Russell had an opportunity, maybe in hindsight a handpass over the bar would have done because he was coming in at an angle.
"Then Tommy Maher had a similar opportunity.
"Stephen Quirke's shot in additional time at the end of the game was only inches from going over the line.
"We responded very well after Cavan got their first goal and on another day we could have won by a point."
Despite last weekend's setback, it was a productive campaign for his team.
"Our number one goal was to get promoted, but it would have been nice to have won silverware.
"However, last Saturday was a fantastic opportunity for a lot of lads to play in Croke Park. We got more scores than Cavan, 15 scores to 12, but Cavan got the crucial goals.
"The big thing we have to learn is that we had too many unforced errors and turnovers.
"But we're creating chances. We scored 11 goals during the league, and outside of Galway I think that was the highest total across the four divisions.
"We have developed a lot of young fellows as well."
One of those younger players who has stood out during the campaign has been Mark Russell, who kicked four points from play against Cavan, including three outstanding scores from the right wing in the first half.
The Aherlow player was replaced by Stephen Quirke in the 54th minute, a move that surprised many people. However, David Power has revealed that management didn't want to substitute him.
"He signalled himself that he wanted to come off. It's his first proper season playing at midfield, which is a high-energy position, and he has been substituted between the 50th and 55th minutes of matches. At that stage you're going to have fresh legs coming on.
"We didn't want to take him off because he has been such a threat, and has been a revelation. But he ran himself into the ground."