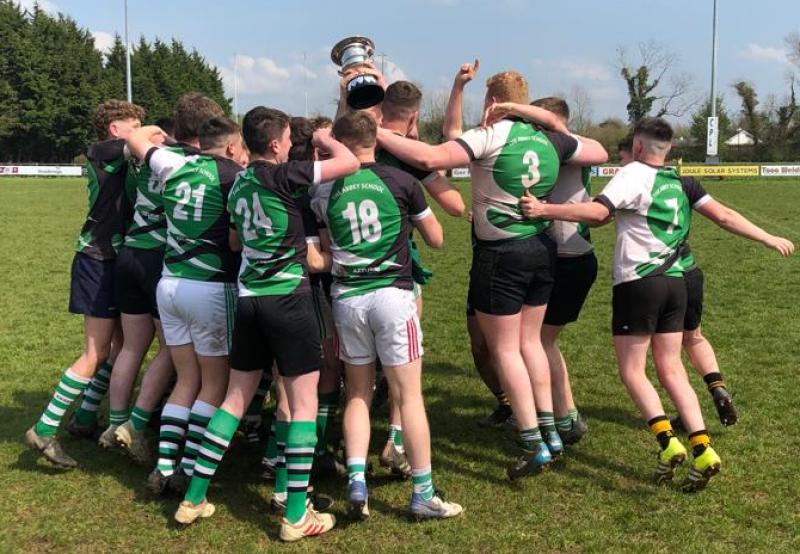 The Abbey School Tipperary celebrate their O'Gorman Cup win over Patrician Academy of Mallow in the final played at Bruff.

The Abbey School Tipperary claimed their second O’Gorman Cup Munster rugby title against Patrician Academy Mallow in Bruff RFC on a score line of 31-15.
Patrician Academy started strong by winning their own kick off and had five minutes of continued possession inside the Abbey twenty-two metre line. The Tipperary men's defence held firm and won a penalty to clear their lines. After sustained Abbey pressure in the Mallow half, Oran Kelly finished a dominant attacking play for the Abbey by touching down in the corner to put five points on the board. However, he failed to convert the difficult kick.
The Duhallow side got into their stride and after a strong display in defence and the Abbey were punished 17 minutes in. Niall Carroll found space out wide and outran the Abbey covering defenders to score under the post, following a long and aggressive attacking play for Cork men. Sam Glynn then converted try to put Mallow ahead, 5-7.
The Academy were attacking straight from the kick off and after some big carries from Joseph Cagney and Gavin Sheehan, they won a penalty 25 metres from goals. Sam Gylnn again converted to stretch the Mallow lead to 10-5.
The Tipperary side struggled to gain possession of the ball for long periods of the first half. Mallow controlled the game with the breeze for the next fifteen minutes. However late in the half the Abbey got their hands on the ball and after five minutes of sustained pressure, TJ Moloney drove over the line from 5 metres out. Following an Oran Kelly conversion from in front of the posts, the Abbey’s lead was restored to 12-10 with two minutes remaining of the first half.
The Abbey came out for the second half playing with the aid of a strong wind and began to dominate procedures.

In the 42nd minute, Paddy Crowe dived over the line to strengthen the Abbey’s lead. However, the Abbey failed to convert the try leaving one score still between the teams.
From the resultant kick-off Paddy Kennedy cleared the Abbey lines with a massive kick chased by Raymond Kelly who won back possession deep in the Mallow half. With some great offloads and hands shown by the Abbey backs Oran Kelly finished the move in the corner. He converted the kick from a very difficult angle to stretch the Abbey lead to 24-10.
Mallow responded and showed great determination to get back into the Abbey half. Darragh Lawlee and Ronan Lankford lead the charge with some big carries breaking tackles to get a foothold inside the Abbey twenty-two. After sustained pressure Sam Glynn found a gap in the defence and crashed over in the 55th minute. He failed to convert his try leaving the score 24-15.
The Abbey was not finished however and from the kick-off which they retained and they utilised the pick and go to great effect from Darragh Barlow, Ben Ryan and Michael Coman. James Kilmartin finished the move with a try, which Kelly converted. This ensured the Abbey’s triumph over the gallant Cork side with time up.
Best on the day for the Abbey were Michael Coman and Conor Farrell with some great carries, and Evan Kennedy who was superb in defence. The back three for Mallow were excellent Niall Carroll, Barry Taylor and Sean Bartley who had great pace and really tested the Abbey all day. The subs who came on for the Abbey really made a massive impact Paddy Kennedy, Evan Hawkins were great with ball in hand. Moss o Brien and Micheal O’Dwyer put in some big hits to guide the Abbey to victory.