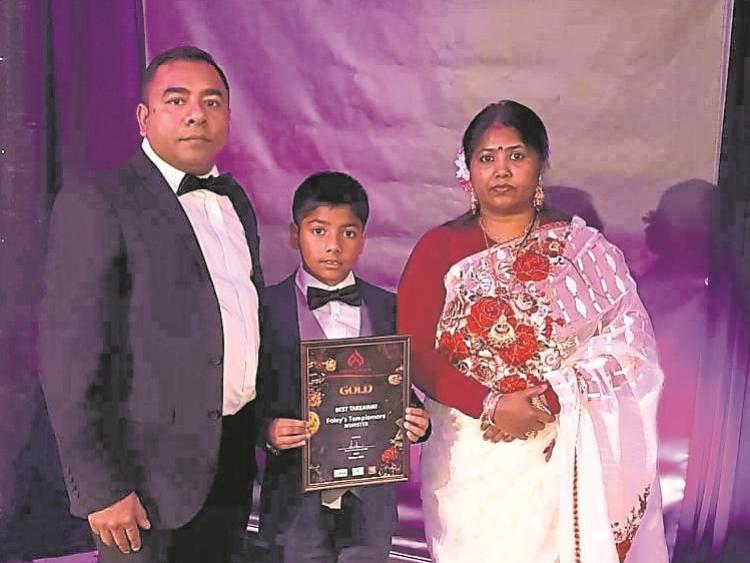 Photo shows: Nipon, his wife Raihana and son Rayan as they received their Award held recently in Dublin

At the Irish Curry Awards held recently at the Ashbourne Hotel Dublin, Mostofa Chowdhury, better known locally as Nipon, received the coveted prize of the Best Curry Award in Munster.
Asian eateries are undeniably popular in Ireland, but until now there has been no dedicated Awards to recognise their culinary talents and contribution to the Irish Food scene.
Now in its fourth year of the Awards System, people –i.e customers, were asked to nominate their favourite curry house across the Republic and Northern Ireland for the Curry Awards.
Judges Paul O’Connor and Joris Minne along with an expert panel of judges around the country secretly visited all the restaurants and takeaways shortlisted.
The happy result for Nipon was that his takeaway known as Foleys Indian Cuisine in Main Street Templemore was declared the best Asian Curry in Munster for quality of flavour and for real spices.
Nipon has been working in his busy kitchen at Foleys in Templemore for the past 17 years.
His wife Raihana works as second chef with Nipon and they are recognised for the quality of their food, friendliness and service as well as the role they play in the local community in fundraising events.
Nipon wishes to thank all his loyal customers for their continued support over the years, and he is proud of the fact that the Awards acknowledge the social and economic contribution of the Asian community across Ireland. Special thanks also to his wife Raihana, son Rayan and landlord Adrian.
We wish the family continued success into the future.