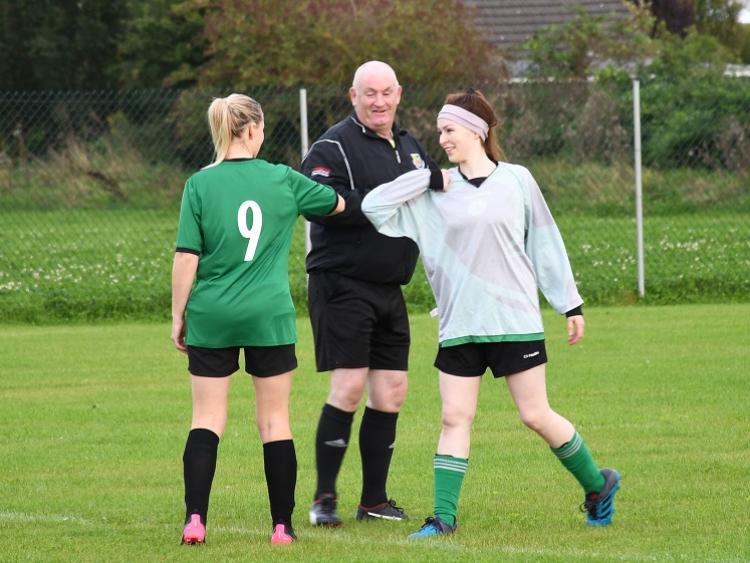 Still only one team back, that is the Senior Ladies but this week will see the Schoolchildren returning to the field.

Girls had their second league game away to Holycross recently. This was a big game as both teams were on 3pts.

Harps started the brighter and the forward partnership of Norma Maher and Ali Donnelly had the Holycross defence on their toes. Harps should have been 2 up in the first 10 minutes Lara O'Toole shot over and a Norma Maher Strike came back off the post. As the half went on the homeside got more into the game but the Harps defence was solid, Aisling O'Toole on the right Kate Shanahan on the left and Catherine Scanlon and Abbie Stapleton in the middle. This was a good game of football and a good battle in the middle of the park. Harps had Mary Corcoran and Ellen Delaney in the centre and the O'Toole sisters Lara and Maya on the wings. No break-through in the first half, 0-0. Harps made a few changes at the break and there was an immediate impact. Avril Tangri went on the wing and her pace was causing trouble. Biddy Higgins went up front and was getting in behind the defence. Tangri's pace forced a corner which she took herself and found Mary Corcoran in the box, 1 nil. It was end to end stuff now and at 1-0 it was still game on. Then came the water-break and then another goal, there wasn’t much on but Norma Maher cut in from the right rounded a few players and shot low to make it 2-0, a great individual goal and it was pressure off. A few scares at the end but Amy Doran in the Harps goal was on top of it and Harps took maximum points. 2 from 2. Another big game this week away to Ballymackey.