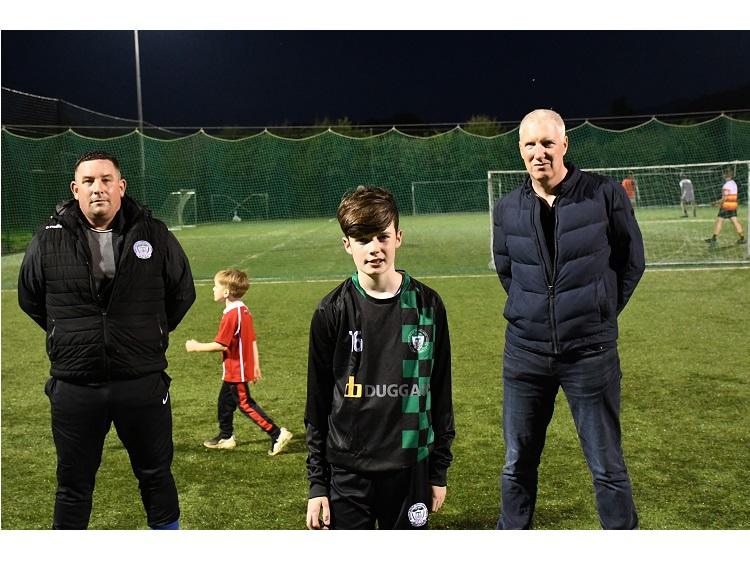 David Duggan, of Duggan Brothers, presenting a set of jerseys to the U-13 boys team with Dean Loughnane, Head Coach and David's son Jack who plays for the team

Photo shows David Duggan, of Duggan Brothers, presenting a set of jerseys to the U-13 boys team. Duggan's have been very kind sponsors over the years and the club would like to acknowledge your continued support. Also in the photo is Dean Loughnane, Head Coach and David's son Jack who plays for the team

Match reports
Youths 5
Moneygall 0
A fine win here in a game they controlled all through. We went ahead on 15 mins when a Conor Cadell through ball found Joe Bourke who showed some great footwork to open the scoring. On the stroke of half-time Rhys Loughnane burst through the Moneygall defence and was brought down for a penalty which Henry Fogarty put away. Just after the break James Kennedy made it 3-0 from a free-kick. Fogarty’s second and another from Mark Davidson secured the points. This was an excellent result for the Harps who made six changes from their previous outing and also gave seasonal debuts to Ali Aissou, Cory Morrissey, Jess Robbins and James Byrne. Plenty of competition for places here.

U18 Girls 0
Ballymackey 2
The visitors proved the stronger in this one as the girls were a bit rusty in their opening game of the season. Ballymackey had the benefit of a first round game under their belt and it showed as they were that bit sharper. Still the girls dug deep and held out until the 70th minute when the visitors went one up. They then doubled their lead in the 80th minute to secure the tie and advance to the next round. Best wishes and a speedy recovery to both Molly Nevin and Chloe McAuliffe who suffered a nasty clash of heads.

U-13 Boys teams
Well done to both our U-13 Boys teams who recorded good away victories in the Cup at the weekend. Our A Team proved too strong for Ballymackey as goals from Ryan Loughnane (2), Jack Duggan (2), David Rabbitte (2) and Odhran Dalling gave them a comfortable 7-1 victory while a brace from Paddy Hoare and one from Tom Collier saw the B team defeat claim victory over Moneygall.