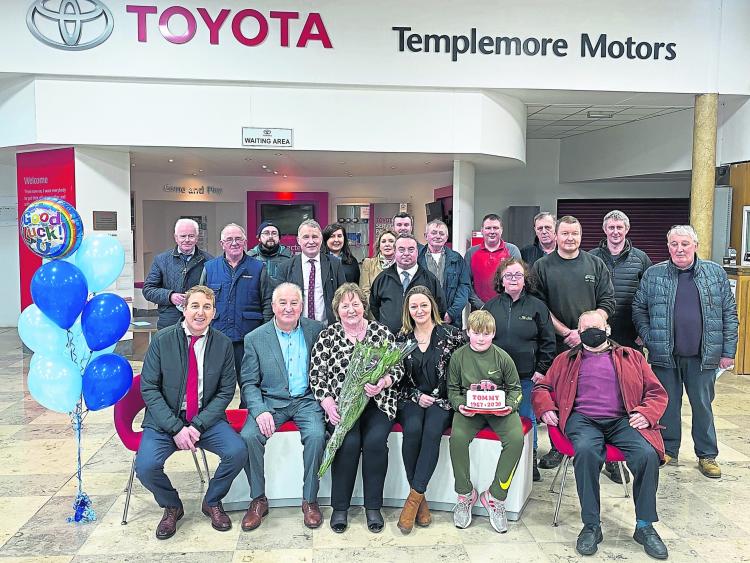 Tommy Ryan retired from Templemore Motor Works on December 14 last after 53 years continuous service with the company.
His retirement happily coincided with the relaxing of Covid-19 restrictions enabling us to mark his retirement.

Originally from Cummerjudy, Milestone, Upperchurch, Tommy joined Cambie’s on November 7, 1967. He trained initially as a diesel mechanic where he worked closely with Sol Cambie.

He also trained on diesel fuel pumps and injectors which were a highly important and specialised area at that time. Both Sol and Tommy were highly regarded for their expertise in this area.

Some years later Tommy moved into commercial sales, tendering nationally for local authority contracts. He was responsible for the sale of many fleets of Toyota Hi-Ace and LiteAce vans, Dyna 100 Pick Ups and Hilux 4x4 to municipal bodies such as Dublin Corporation and Tipperary, Dublin, Offaly, Clare and Limerick County Councils.

Tommy was known the length and breadth of the country through his involvement in this work.

Ever open to change, Tommy reinvented himself and in latter years became parts manager in the garage providing an excellent service to retail and trade customers alike. During the lifetime of Lisheen mine Tommy ensured the smooth running of their large fleet of Toyota Hilux models which experienced extreme hardship underground.

In his 53 years working in Templemore Motor Works, Tommy always gave of his best. Nothing was ever too much trouble to him if it meant keeping a customer happy.

He was eager to learn new things and was a very loyal, dedicated and respected member of the team. He was always on hand to help out if anyone had a problem or were unsure of a particular matter.

He now shares with Joe Hough, another very respected retired member of Cambie’s staff, the unique distinction of having completed over a half a century of continuous service at Templemore Motor Works. Over 100 years between them. Quite a record!

Tommy married the love of his life, Eva O'Rourke from Ashmere, Roscrea in 1968. Now living in Moyne they have 6 children namely Mary, Elizabeth, John Paul, Tracey, Little Eva and Stephanie and their much loved grandchildren Ellie, Thomas, Christopher, Conor, Maria,Anna, Harry and Lucy.

Tommy and Eva enjoy nothing more than dancing and such is their talent, they could rival any couple on Dancing with the Stars.

Tommy's main passion in life has always been motor related. He loves restoring old cars, tractors or anything with an engine and has a number of projects ongoing at present.

We thank Tommy for all his dedication, commitment and hard work and we wish him many happy years of retirement. It can certainly be said that after Tommy they broke the mould.