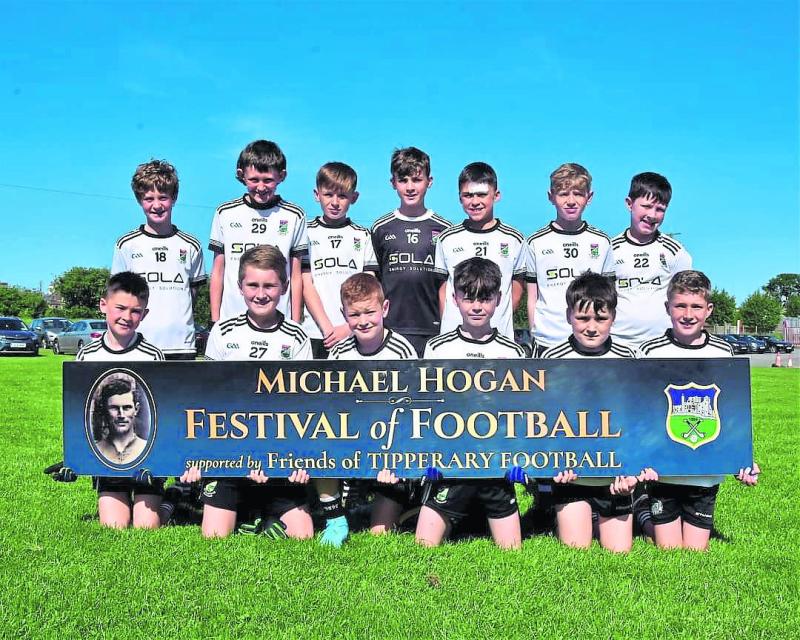 St. Martin’s of Wexford, Thomastown of Kilkenny, Clonlara of Clare and Ardrahan of Galway were based in Clonmore while Brackens were joined in Pairc Shileain by Eire Og of Cork, Glenroe of Limerick and Passage of Waterford.

Both the pitches and the grounds were in pristine condition and great credit is due to all who prepared them. The weather Gods smiled on us as the sun shone all day.

St. Martins and Ardrahan came through in Clonmore and were joined in the semi-finals by Brackens and Eire Og. The Galway boys saw off the Rebels in extra-time while Brackens set up a Tipp/Galway final by taking care of the Wexford champions. In a tight final Ardrahan claimed the spoils on a 1-5 to 1-3 score line.

On a busy day for the club our U-11 footballers took part in the Michael Hogan festival of football. Team 1 retained the Division 1 title they won last year when they beat Moyle Rovers in the final while Team 2 lost out to Rosegreen in the Division 7 final. Once again well done to all those who take the time out to look after these teams.

Our weekly 50/50 draw took place in the Templemore Arms hotel on Saturday. Tommy O’Connor from Drom was the lucky winner of €473. It capped off a mighty weekend for Tommy who married Emma Kirwan from Clonmore the day before.

Our Junior B footballers face Loughmore in the Park on Saturday evening at 7pm while our Senior footballers also have home advantage as they face Ardfinnan at noon on Sunday in the County League semi-final. Ballyporeen are at home to Clonmel Commercials in the other semi-final on Sunday evening at 6.30pm.

The club will host a golf classic in aid of the juvenile club on Friday June 10th and Saturday June 11th. Teams of 3 are €120. Anyone interested in playing can contact Gerry McGrath on 087-1473461

Photo caption for picture above: Winners of the Michael Hogan (Dv. 1) festival of football 2022.