About Town: Templemore news and notes

The Cardens town in focus 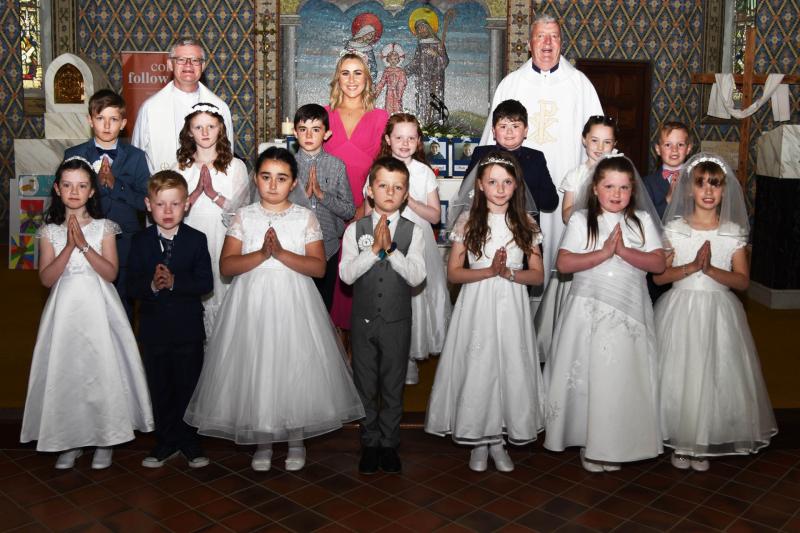 Fit4Life
Templemore Fit4Life members were on the road again this week. Last month it was Limerick, this month it was the Cork City Marathon. The team took on the Marathon as a relay and they had an extra member this time out. Eileen Looby joined the normal quartet of Larry Stapleton, Tommy Gleeson, Noel Hammell and Enya Burke. There was a large entry into the Relay Marathon with over 450 teams crossing the finish line and lads were placed 15th in the field. Well done lads.
Photo below: l/r; Noel Hamell, Tommy Gleeson, Eillen Looby, Enya Burke & Larry Stapleton. Why orange you might ask, although it is the Clubs colours thats not the reason, when you have hundreds of runners approaching the baton transition area you want to be able to pick out your team member. Good idea Tommy. 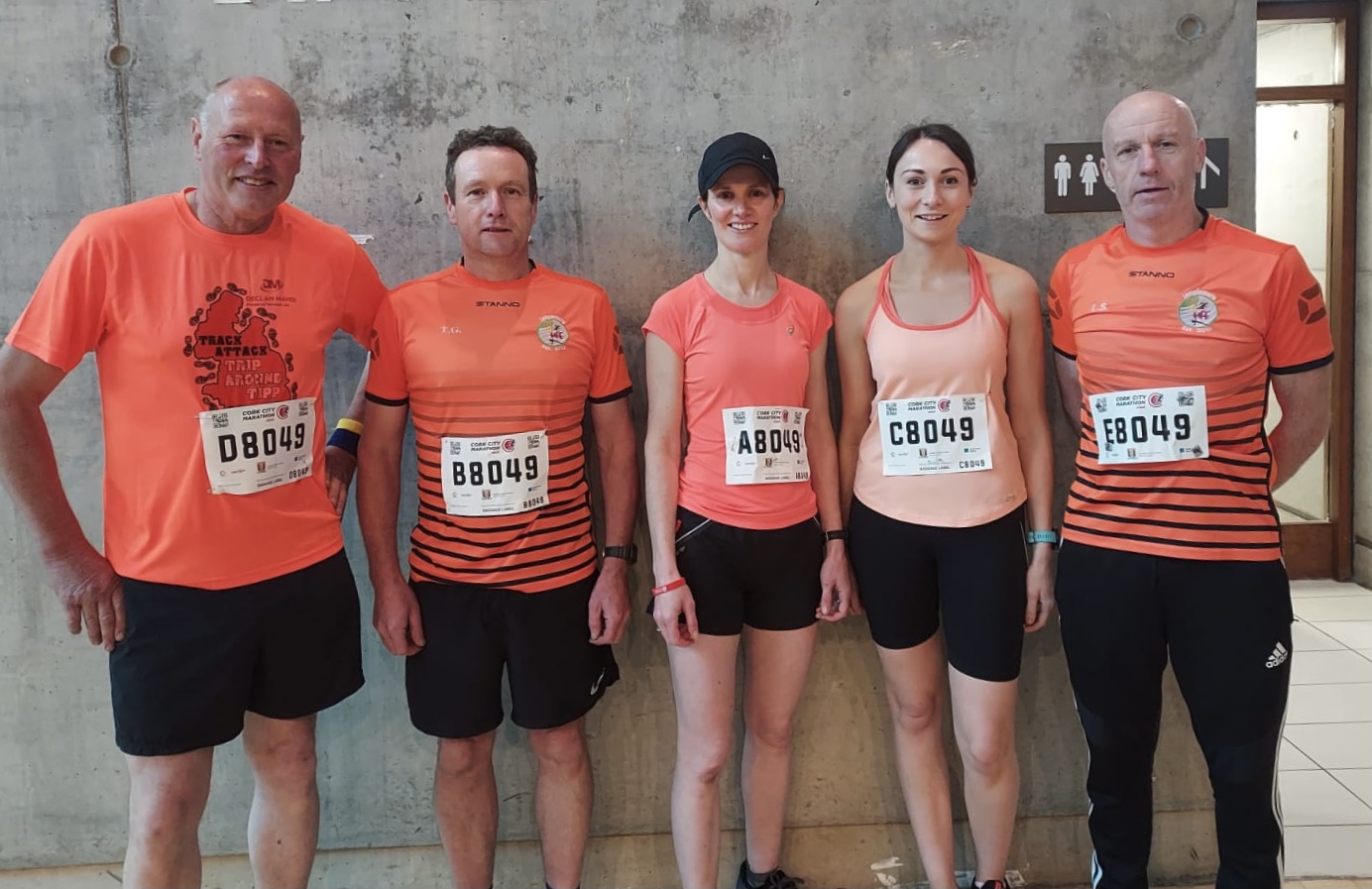 Our Grade E team achieved the ultimate accolade in University of Limerick 28th May in becoming All Ireland Champions ,having knocked on the door many times over recent years.
In doing so they were victorious in the semi final against Connaught Champions Galway Lawn Tennis Club, in a nail biting final set win ( 22/ 20 ) . The final against Leinster champions Kells was a more comfortable win overall.
This adds to past All Irelands , as Templemore regularly punches above its weight , for a small rural club.
The team included Catherine Tuohy, Joanne Slevin, Sorcha Murphy, Rebin Wilson, Stephen Maher, Sarah Doheny, and Kieran Phelan.

A fantastic achievement for this team and Templemore Badminton Club.
A vital fundraiser is ongoing to replace the existing floor at our two court badminton hall at New Row. This is a new timber floor, the present one not fit for purpose. To donate and get your name forever on display on a metre..” Sponsor - Square Metre “ ( or portion thereof ) , see the GoFundMeLink:https’//gofund .me/87343c69.

All contributions gratefully received. And more All Irelands titles predicted. 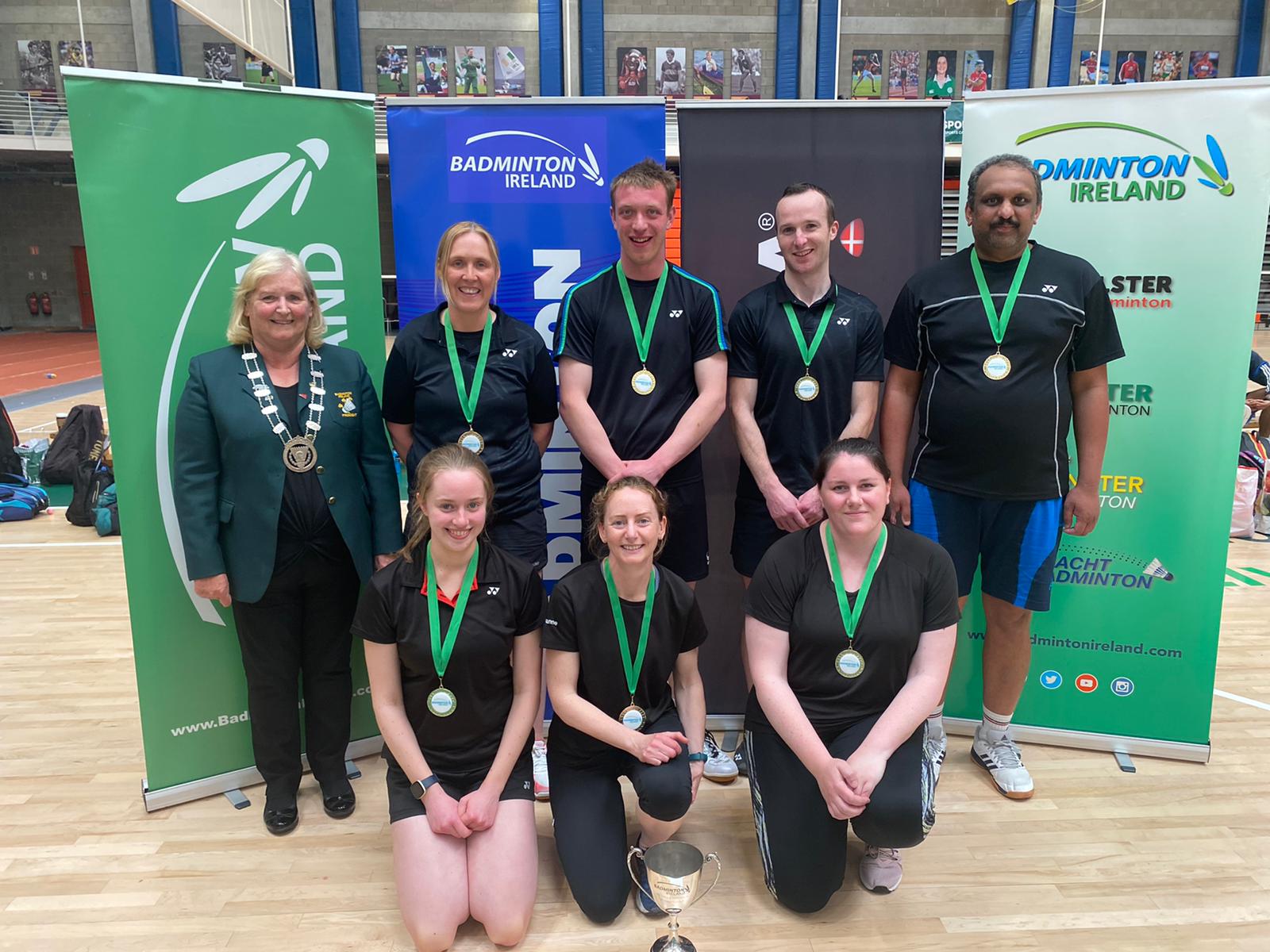 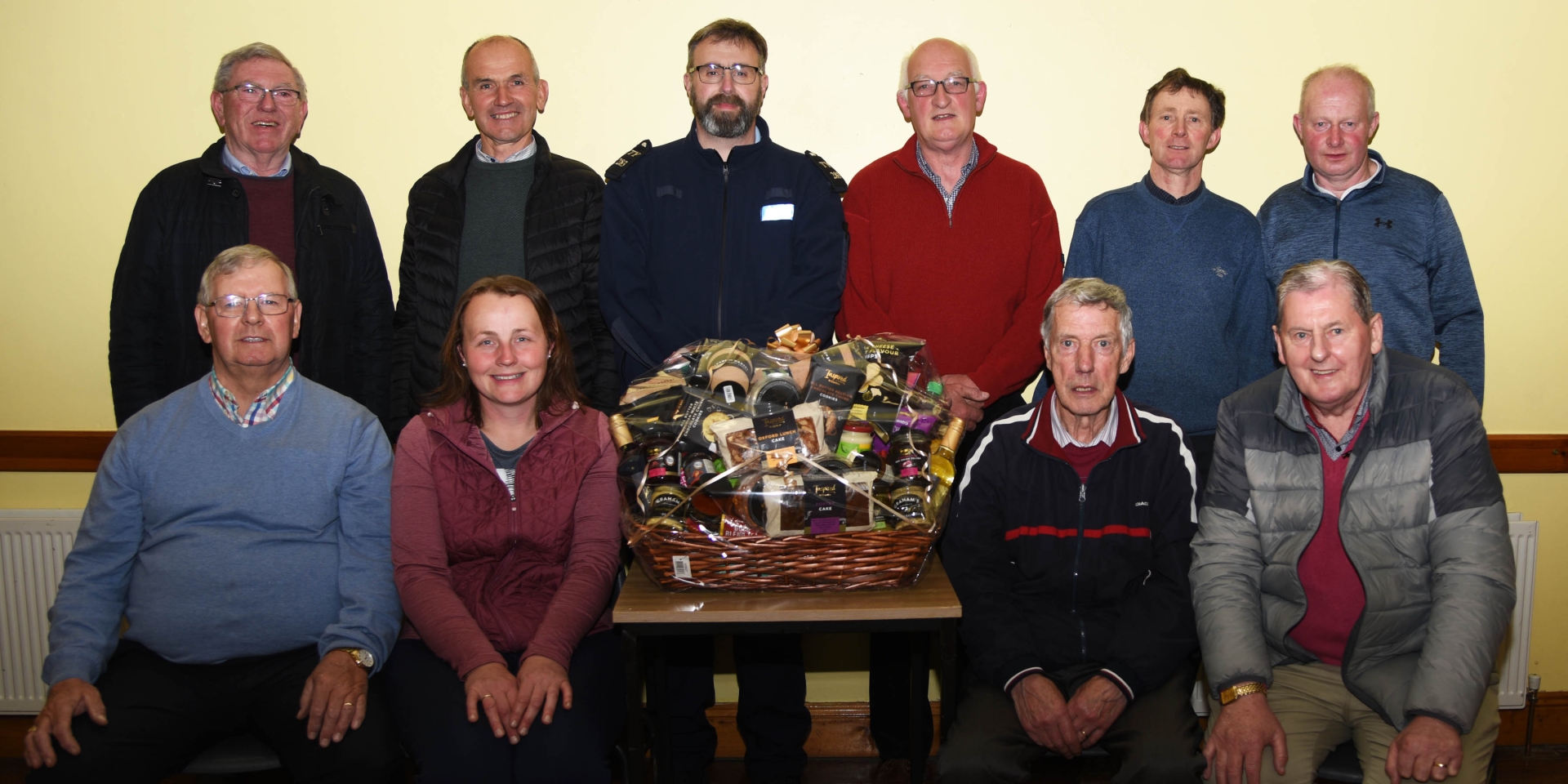 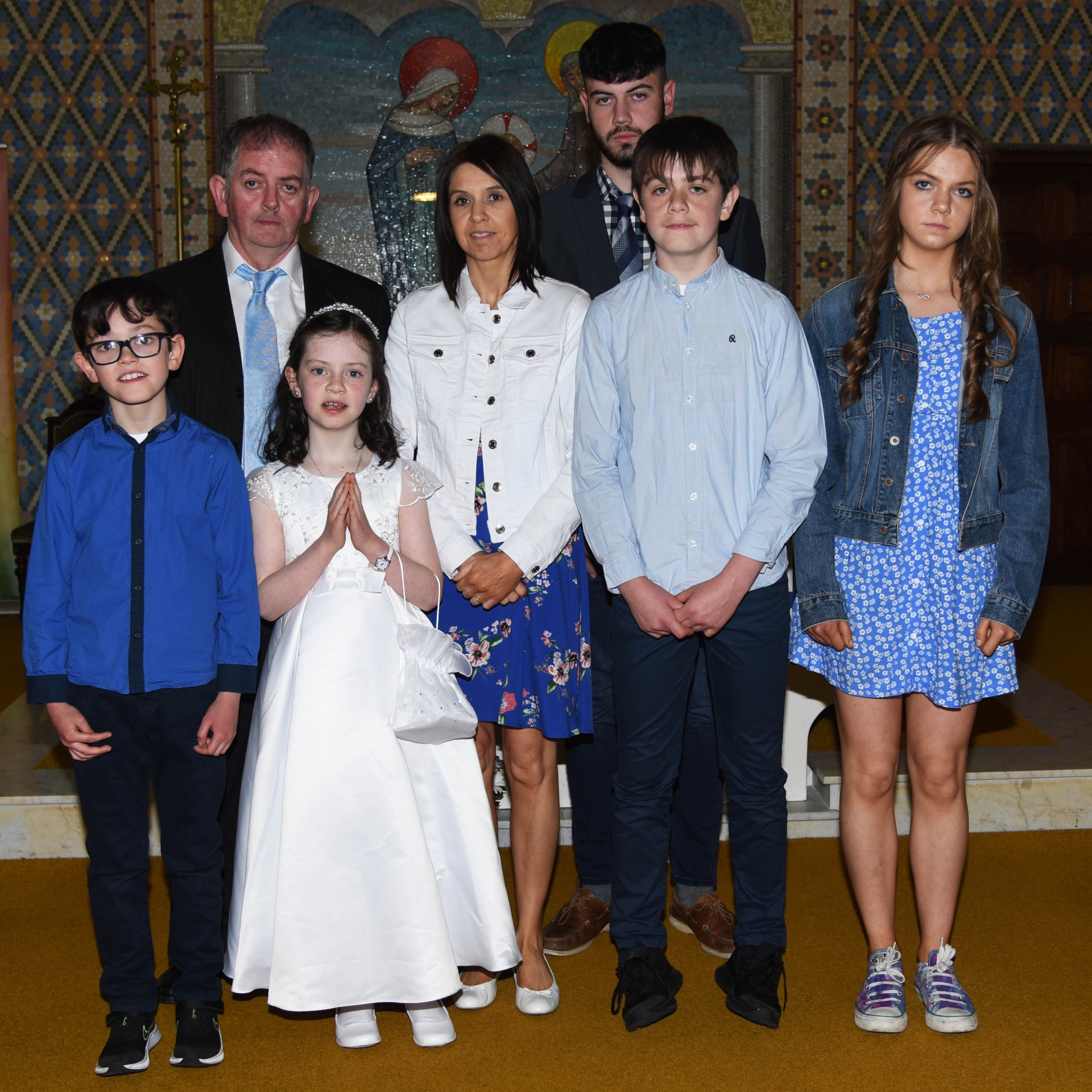 Active Retirement
A cluster meeting for active retirement groups will take place in the Order of Malta house in Thurles at 2pm on Wednesday June 22nd at 2pm. There is also an Expo in Thurles on June 23rd in the LIT Campus from 12 to 3pm. A bus from Roscrea will pick up in Templemore so anyone wishing to travel please phone 0818085000 to book your seat. A trip to Waterford has been arranged for Saturday July 2nd and a trip to the Gleneagle hotel in Killarney is also in the pipeline for later in the year. Our next meeting will take place in the McAuley Centre on June 15th at 3pm.

Tidy Towns
Work on Church Avenue will be completed on Monday, June 13th and volunteers are asked to meet at the Mall Bridge at 7 pm. Work is moving a pace with the help of our Ukrainian friends, and the committee are most appreciative of their willingness to share the workload.We again appeal to traders and residents to keep the areas outside their property both weed and litter free agus gach duine "ag fás le chéile" 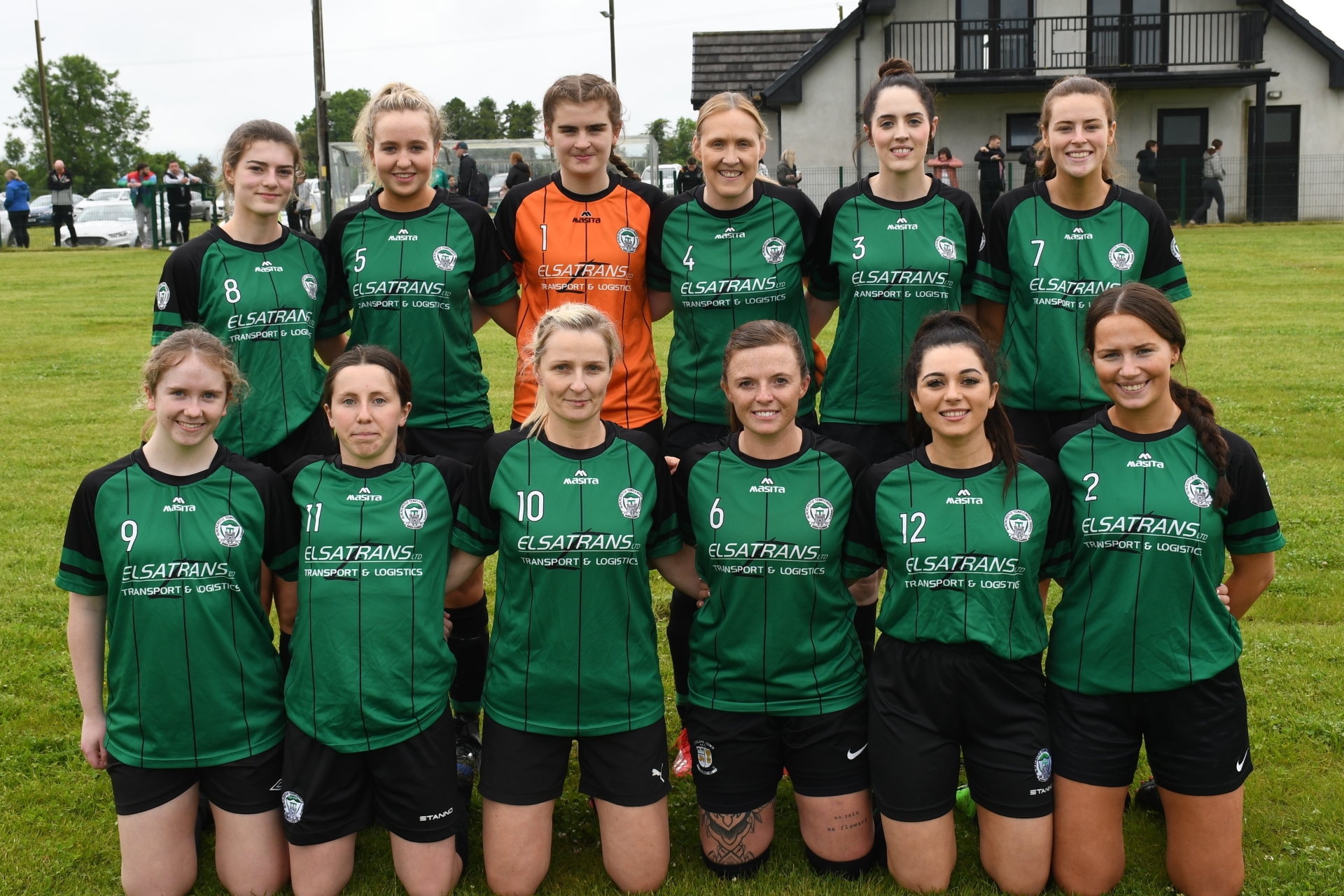 Big week for the Club with 2 domestic Finals and a Munster Semi-Final but it was 1 of those weeks when it just wasn’t to be as none of the games went our way. First up was the U12B’s who were in the Plate Final against Rearcross, Harps got a poor start and never recovered and Rearcross ran out easy 5-1 winners. Next up was the U15 Girls who were in the Cup Final against Ballymackey, this was a more even game. Harps had the better of the early exchanges hitting the post twice. 0-0 at half time. The break through did come with 10 minutes left and it went to Ballymackey, Harps hadn’t time to recovered and when Ballymackey made it 2-0 it was game over, unlucky girls.
Our Senior ladies are very busy at the moment with playing at least 2 games per week, first up they were away to St Kevin’s in the League with an under strength team but after a slow start they came away with the points, 4-0. Goals from Paula Delaney and a hat-trick from Eimear Hassett. Next up the Girls had the Munster Shield Semi Final against Dungarvan that was played in Holycross. Girls never got going in this one, Dungarvan got in for a goal on 30 minutes from a corner and that turned out to be the winner. Unlucky Girls, ye did the Club proud getting this far probably the biggest game in the Clubs history and ye drew a big crowd on the day. And also a word of thanks to Holycross for making their facilities available for the game.
It just wasn’t to be this week but you can’t lose a Final or a Semi-Final unless you get there. Again extended match reports and photographs on our facebook page.
Photo attached, Our Senior Ladies that took on Dungarvan in the Muster Semi-Final. Back l/r Ellen Delaney, Abbie Stapleton, Caitlin Treacy, Catherine Scanlan, Ali Donnelly, Grace Cummins. Front l/r Erin Bourke, Eimear Hassett, Norma Maher, Paula Doran (C), Sophia Quinlan & Kate Shanahan.

Well done to our Senior footballers who defeated Ardfinnan ( 2-16 to 1-8) in the County League semi-final on Sunday last in the Park to advance to the final against Clonmel or Ballyporeen who play this coming Saturday in Ballyporeen at 4pm. See Clubzap/Facebook for match report. The final is fixed for the weekend of June 18th/19th. Well done to George Allen who landed last Saturday nights 50/50 Jackpot worth €460. George bought his winning ticket in the Temple Bar. This weekend will see the club hold a golf classic at Templemore Golf club to raise funds for the juvenile club. This is an important fundraiser for the club and the club would like to thank all those who have contributed so far and anyone wishing to still come onboard can do so by contacting any committee member. Hard luck to our U-15 A footballers who went down to Durlas Og in the Mid final in Dr. Morris Park on Tuesday night last. Our Junior B footballers also went down on the same night as Boherlahan pipped them by a point ( 0-7 to 0-6). They now face Moyne/Templetouhy in the Park on Saturday evening at 7.30p