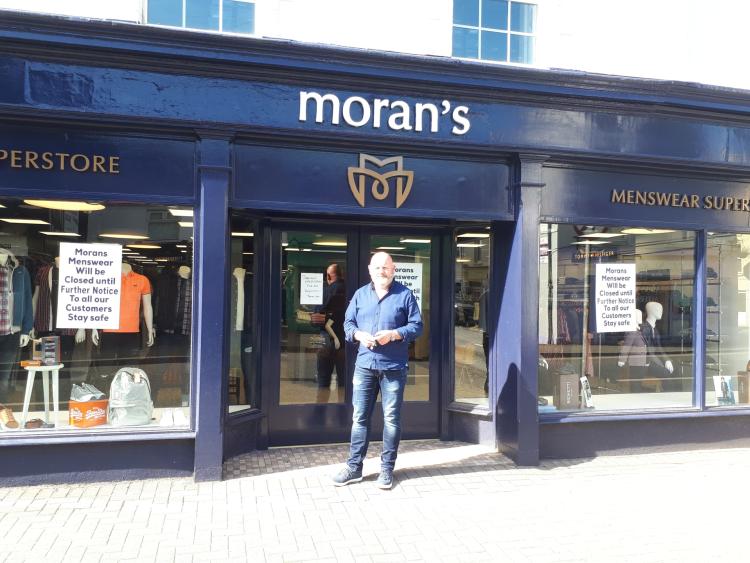 Diarmuid Moran outside his store in Thurles

“We are ready to re-open and looking forward to it. It's just a case of waiting now,” - Diarmuid Moran.

Just two and a half weeks after opening the magnificent new Moran's Menswear Superstore in Friar Street, Thurles, Diarmuid Moran was one of the first independent retailers in the country to close due to coronavirus.

Many thought his actions were premature, but Diarmuid, who employs six people had the best interests of his staff and customers in mind and he does not regret the decision to close just before St Patrick's Day.

However, the Kerry native makes a very valid point in relation to mega retailers in the country whose clothing, gardening, household and leisure sections have remained open and are extremely busy, while independent retailers specialising in such areas have been forced to close.

“Don't get me wrong, I'm not whinging or anything about this because I think we made the right decision to close. But, it is difficult to understand how the biggest retailer in the country is allowed to have their drapery section open and anybody can wander in and around it. Surely, it would have been more equitable to have the supermarket section open for food and groceries, but the drapery section closed?

“It's the same with gardening and DIY - many of our hardware stores were closed for a long time due to the restrictions, but some of the bigger retailers were selling out of gardening items. It does not make sense and I have to say that if people are observing social distancing and doing what they should be doing, I cannot see a problem with having shops open,” Darmuid said.

Moran's are celebrating 50 years in business in Thurles this year, but they have hardly had a more challenging year. They have invested heavily in the magnificent new shop having moved across the road from their original premises. It is a move which Diarmuid describes as a step into the future and one which will help to sustain the business, especially as we move out of lockdown into an uncertain economic reality.

“I think we invested in the premises and made our move just in the nick of time. The store is now spacious enough (4,000 sq ft) to allow plenty of room for social distancing and we have installed the glass screens and all of that to ensure safety and comfort for everyone. We have added a huge wedding store upstairs with plenty of private rooms and my attitude always is to look forward and see what can be done in future, rather than looking back and worrying about the past.

“We are moving towards online as well and we have received tremendous help from Tipperary Local Enterprise Office in this regard. People have been very good to us and the level of goodwill out there is phenomenal really.
Talk of a reduction in commercial rates to try and boost local business is welcome according to Diarmuid, but he adds that a government sponsored VAT relief scheme would be more beneficial - VAT on clothing is 23% and a reduction on this would make a big difference and help to boost sales when businesses opens again.

“We are ready to re-open and looking forward to it. It's just a case of waiting now,” he says.