The common frog at Cabragh Wetlands 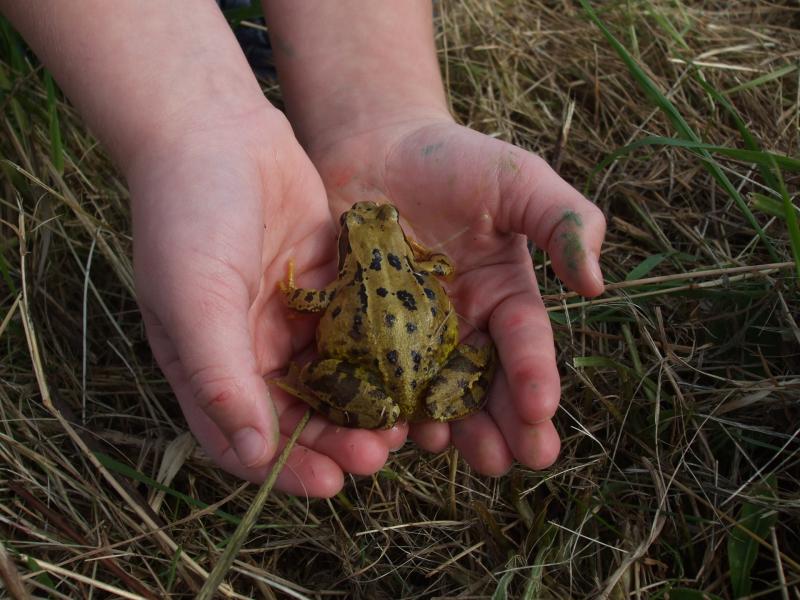 In the 100 years up to 2011, Tipperary has lost 45% of its farm ponds -frogs may also be adversely affected by global warming.

In the 100 years up to 2011, Tipperary has lost 45% of its farm ponds -frogs may also be adversely affected by global warming.

We had a very successful open day at Cabragh Wetlands recently.

There were experts at hand to explain the importance of the habitats on the site. The youngest members of the audience were not paying any attention to the experts. They had found lots of tiny frogs and they were fascinated.

We have only three species of amphibian in Ireland, the Smooth Newt, the Natterjack Toad and the Common Frog. The frog and newt are found in Co. Tipperary but the Natterjack is confined to Co. Kerry. There is some debate as to the origin of our frogs. Geraldus Cambrensis wrote his Topographia Hibernica in the 1180s and he said that Ireland had ‘no serpents or snakes, toads or frogs, tortoises or scorpions’. Another account says that frogs were introduced to Ireland by a Dr. Gwithers in 1699.

Both of these stories have been disproved by discoveries at Keishcorran Cave in Co. Sligo. Bones of frogs were found in sediments in the cave and these were at least 10,000 years old. So frogs have been in Ireland since the end of the last ice age.

Late January and February are the usual months for Frog spawn. Frogs move from all sorts of damp places to reach breeding ponds. The males are busy croaking, trying to attract females which are bloated with eggs. The urge to breed is so strong that many are killed crossing roads, where the male is still latched onto the female. They make such a racket at night in the ponds, splashing about and croaking that they appear in the diet of owls this time of year. Females can lay up to 1000 eggs and a high percentage hatch into tadpoles but less than 1% survive to become froglets.

While frogs eat a wide variety of invertebrates, they themselves are eaten by a wide variety of predators. Birds such as Grey Heron, Little Egret, Water Rail, and Kestrel all prey on the frogs at Cabragh. They are also an important part of the diet of Otters. So frogs have an important role in the freshwater ecosystem.

While still common in places, drainage of ponds and wet grassland is causing a decline in the overall population of the Common Frog. Farm ponds have disappeared over the years and most frogs are now found in drainage ditches. (It is illegal to remove frog spawn from a pond).

In the 100 years up to 2011, Tipperary has lost 45% of its farm ponds. Frogs may also be adversely affected by global warming. Extreme changes in temperature, or prolonged droughts, may put them under stress. As farmland is managed more intensively, places like Cabragh become more important as a refuge for species that depend on watery habitats.