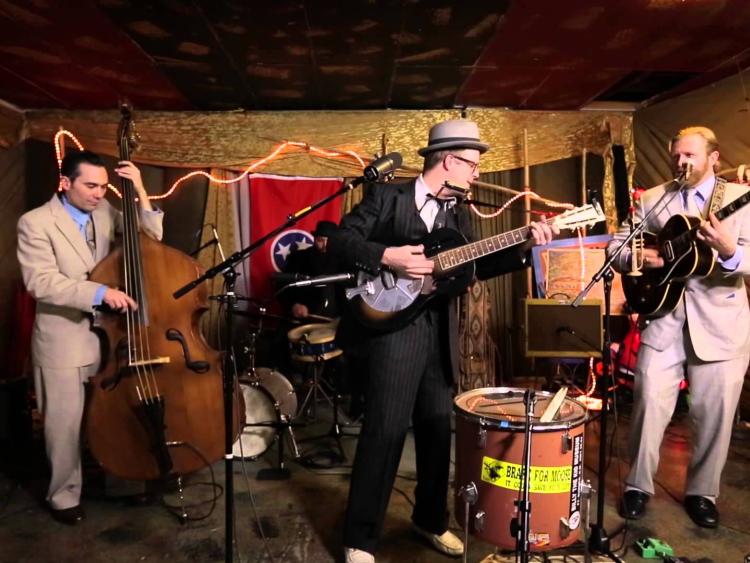 Clonmel World Music is delighted to welcome a fantastic band, Woody Pines, from Nashville USA. After many successful UK and Ireland tours they are widely regarded as one of the most entertaining acts on the Americana circuit.

Along with artists like Pokey Lafarge, Woody Pines continues to forage through the secret world of old 78′s and to write new chapters in the Anthology of American Music. Integrating sounds from Leadbelly to Bob Dylan, from Woodie Guthrie to Preservation Hall, Woody Pines belts out songs of fast cars, pretty women and hard luck with a distinctive vintage twang.

The bands distinctive viper sound is brought together by Woody who plays the National Guitar, harmonica and floor tom, singing in a voice sounding uncannily like a young Willie Nelson. Joining him in the band is Skip Frontz Jr. on the upright bass, adding both foot tappin’ low-end and rapid fire percussion with his sought after slap technique. Brad Tucker on the vintage electric guitar and with great vocal harmonies fills out the trio.

If you’re wondering where the music of Nashville troubadour Woody Pines comes from, look to the streets. It was on the streets as a professional busker that Woody first cut his teeth, drawing liberally from the lost back alley anthems and scratchy old 78s of American roots music, whether country blues, jugband, hokum, or hillbilly.

Heavy rollicking street performances are the key to Woody’s intensely catchy rhythms, jumpy lyrics, and wildly delirious sense of fun. Woody traveled all over the streets of his country, road testing his songs, drawing from the catchiest elements of the music he loved and adding in hopped-up vintage electrification to get that old country dancehall sound down right.

Its proper to call Woody Pines new songs “hillbilly boogie;” a rarely remembered genre of American music made famous by the Delmore Brothers. Hillbilly boogie sits at the exact moment when the buzzed- out, electrified hillbilly country music of Appalachia (which itself drew heavily from country blues), first hit the sawdust-floored honky-tonks of old Nashville and Memphis.

It was the moment exactly before the birth of rock ‘n’ roll. Woody writes with a wink to this critical time on songs like “Anything for Love” and “New Nashville Boogie,” drawing in modern references at will to make his points. He also dives deep into the tradition, drawing up gems like the old gangsta- folk song “Make It to the Woods” from the Mississippi Sheiks. In Woody’s music, there’s never an idea that roots music should be a recreation of an older time.

Instead, he taps the vein of this music that’s still beating today, finding common ground with the old hucksters and bar-hounds who created the music in the first place.

Tickets for this great gig are on sale now, and are available online on www.clonmelworldmusic.com, and in Marians Bookshop. O’Connell St. Clonmel , and South Tipperary Arts Centre, Nelson Street Clonmel,

Doors for the gig will open at 8pm. There will be no support act, and the band will start at 9pm prompt. Tickets are available now; online on www.clonmelworldmusic.com; in Marians Bookshop Clonmel; in South Tipperary Arts Centre Clonmel, or from Gerry Lawless on 086 3389619