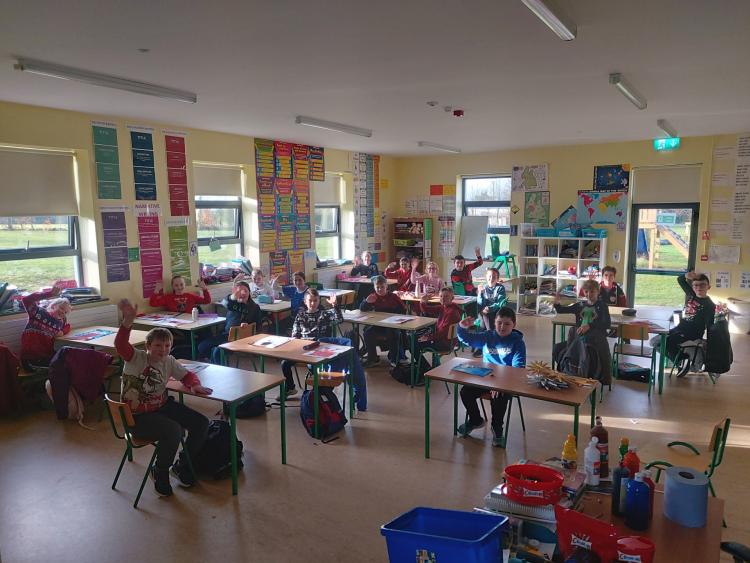 Fifth and sixth class students at the Thurles primary school recorded the song earlier this month and have since attracted legions of fans across the country with their accomplished recording of the popular Christmas hymn.

Buttoning up their winter coats and decked out in their hats and gloves, students took to the school's sports pitch in November and December to perfect their harmonies while safely socially distancing.

“It was a sight to behold alright,” says Leugh NS principal Louise McCullagh.

“We got the whole thing recorded and produced quite quickly because we were under time constraints with Covid-19 restrictions,” she explains, adding the entire school has been overwhelmed with their new found chart success.

“As well as our pupils I have to praise the parents and guardians for their help and cooperation in making it happen. We had a very short window to record in Nenagh and parents were just brilliant bringing kids to the studio for their different time slots,” she adds.

Three charities were chosen to benefit from the proceeds of the song including Irish autism charity AsIAm, Down Syndrome Ireland Tipperary branch and North Tipperary Hospice Suir Haven.

“He’s one of my favourites and we were ahead of him in the charts. The experience really opened my eyes to see how much we could achieve. It was great fun to work towards,” she says.

With normal school activities such as swimming classes, cinema trips and sports matches cancelled due to Covid, Ms McCullagh says the school choir has been a beacon of light for pupils and their families.

“We are finishing out the year on a high note,” she says.

Since its release, the choir has attracted a large number of celebrity fans including radio personalities Alison Curtis and Dermot and Dave of Today FM as well as a host of Tipperary GAA stars.

“We have received so many letters from people not affiliated with the school who have taken the time to congratulate the children for the song,” adds Ms McCullagh.

Also included among the choir's new set of fans is RTE presenter Ryan Tubridy who sent a personalised letter to the class congratulating them on their achievements last week.

“I read the letter in full to the pupils but didn’t say who it was from until the end. When I read out his name the children just went wild with excitement.”

“From the start the children were never blinded by the glamour of a recording studio - they only wanted to do some good and raise money for causes close to our heart at Leugh NS.”

“This was a collective effort from everyone in the school community. From junior infants right up to our senior classes, they work hard the minute they come in the door and I couldn't be prouder,” she says.

The single is available to download online from Bandcamp and Spotify while physical copies are on sale from Leugh NS on 0504-23111, Relish Thurles and Premier Meats.