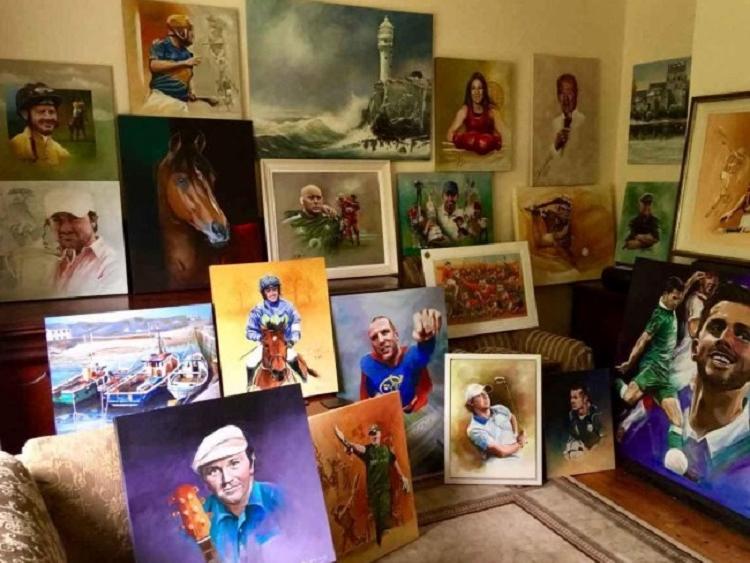 Neil O’Dwyer, mural artist and painter is a native of Clonoulty, County Tipperary has just announced a sale of his paintings which include portraits of sporting personalities. Some of Neil’s paintings have been signed by Irish sporting legends such as Katie Taylor, Paul O’Connell, Micheál O Muircheartaigh, John Hayes and Ruby Walsh. Marking the long relationship that Neil has with children’s charity Make-A-Wish, who grant the wishes of children living with life-threatening medical conditions, 50% of proceeds of the sale will go to Make-A-Wish.

Neil’s most recent project with children’s charity Make-A-Wish, marked the charity’s milestone of granting their 2,500th wish. The children’s charity granted the one true wish of Poppy (aged 5), from Rathnew, Co. Wicklow who lives with Acute Flaccid Myelitis, an inflammation of both sides of one section of the spinal cord which means that she is paralysed and in need of 24-hour care. Poppy wished to have her own disco-themed bedroom and her makeover was specially designed to transform her environment to look less medical and more like a sanctuary for Poppy to move around in her wheelchair, enjoying her toys, dolls, music and lighting. What Make-A-Wish aspired to was to create a haven for her to be a child again and Neil helped realise Poppy’s dream by creating an amazing mural which shows silhouettes of popstars on stage singing.

Neil O’Dwyer, said, “to witness Poppy when she saw her mural for the first time was a very special moment for me. Over the years I’ve done a number of these projects in partnership with Make-A-Wish and it is truly a humbling experience. Giving joy and happiness back to children at a time when they are sick is so important. Make-A-Wish, gets no government funding and that is why I want to give 50% of the art sale proceeds to such a worthy charity.

In addition to his paintings, Neil paints murals all over Ireland and has been in the business over 40 years. His murals and artwork have featured in the press and on national television, in documentaries about renowned sports personalities such as Micheál O Muircheartaigh and the late great Moss Keane.

To find out more about Neil and see his gallery of work check out his website www.murals.ie