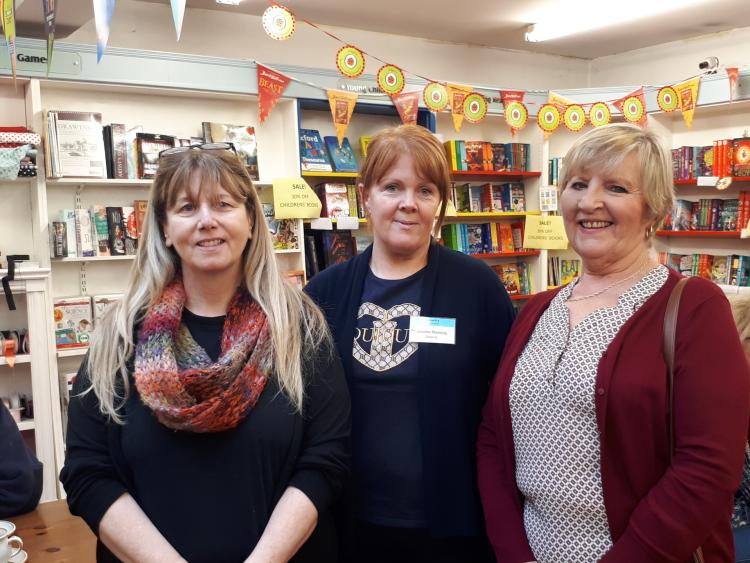 In 2018 the first ever Memory Cafe was launched in Thurles to help spread awareness of Alzheimer’s and Dementia, provide a social outlet for those living with the disease and helping to create a more dementia friendly community for everyone.

Now, just over one year on, the cafe has become a shining example of a community in action and has laid the foundation for the town to earn Dementia Friendly status.

On the morning the Tipperary Star visits the home of the cafe, located in the Bookworm on Liberty Square, the place is a hive of activity. Bursts of laughter fill the air while small groups sit comfortably around a half dozen or so tables consuming freshly brewed coffees, scones and buns.

In one corner a group of musicians set up their instruments, plugging in mics and speakers while others discuss the fortunes of the local GAA teams.

Shoppers slide easily between the groups, saluting neighbours or acquaintances as they go about their day’s business.

“There is a lot of goodwill in Thurles and that’s partly why the memory cafe is doing as well as it is. Without the wider community we wouldn’t be able to run these events, they make it possible,” explains Memory Cafe co-founder Ursula Paine, heaping praise on the owner of The Bookworm John Butler who has kindly allowed the group to set up their base in the adjoining coffee shop every month for the past year.

The first wheels of the Memory Cafe were set in motion in the Autumn of 2018 after local Dementia Champions Ursula, Margaret Pollard and Jennifer Manning decided there was a lack of social outlets for people living with Dementia and Alzheimer’s in the community.

Each of the women have dedicated their careers to working with Dementia patients while Ursula was instrumental in setting up the designated daycare centre CAMEO CARE in Thurles.

Thurles Memory Cafe is run on a voluntary basis and provides a safe, welcoming space where patients, carers and family members can meet, exchange information and share stories. Each month the cafe welcomes a different guest speaker covering topics decided upon by those attending and using the cafes services.

For the last 12 months the group have met on a monthly basis in The Bookworm, however the meeting day was recently changed to Thursday’s to accommodate more people who wished to attend.

According to Margaret Pollard, the main aim of the cafe is to break down barriers and help those who are experiencing feelings of isolation.

“Having a facility like this means people can get out and get involved in their local community and meet others over a cup of coffee,” she says.

“It’s a very social event, very informal,” offers Jennifer who says plans are also in place to create a choir, similar to the Forget-Me-Nots community choir based in Dublin.

Already several local community groups including the Men’s Shed and the Hospital of the Assumption, have agreed to come on board and lend their voices to the new ‘super-group.’

The three Dementia Champions are also keen to get Thurles Dementia Friendly Town status and are hopeful that improved signage and seating facilities will be implemented following the upgrade of Liberty Square.

The determined trio also recently successfully campaigned to get free parking for people while they are attending the memory cafe which Ursula says is another step towards making the service as accessible as possible.

“We want Tipperary to be as age friendly as possible. Things like having free parking for the 90 minutes that people are attending the cafe goes a long way towards that.”

“We’re not here to treat people, we’re here to help them,” adds Ursula.