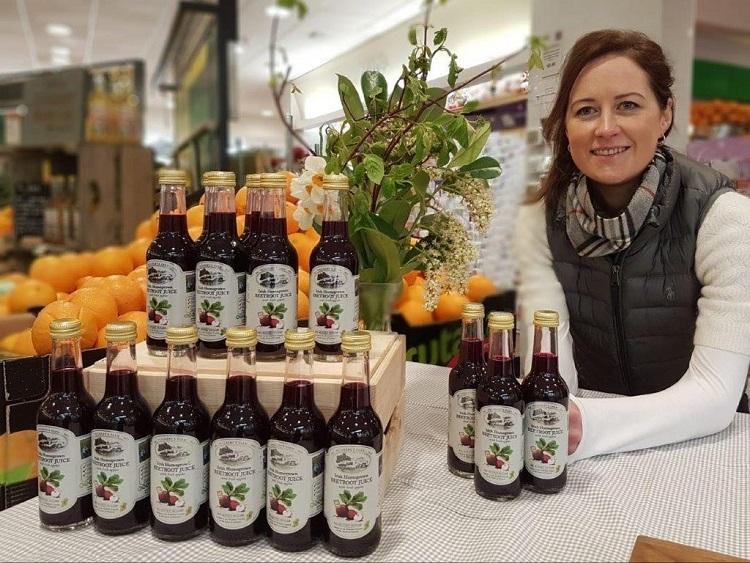 Congratulations to Anne Marie Feighery, originally from Co. Offaly who now lives in Fethard, Co Tipperary, on the recent awards for her beetroot juice
Following a conversation with her dad this enterprising young lady decided to research the possibility of producing beetroot juice. Her brainchild has been amazingly successful. The last two weeks alone has earned the juice both a Great Taste and a Blas na hEireann award. The Great Taste awards is the world’s most trusted food and drinks award. Out of 12,777 products and entries from over 106 countries, Anne Marie anticipated her juice “might get a little bit lost among a host of more quite exotic flavours in the mix compared to the humble beetroot. It was the best surprise when I received a star”. A stamp of excellence by the UK Guild of Fine Food, this award values taste above all else. “These accolades are so powerful for food producers like myself and give enhanced confidence to the consumer that they are buying a quality product”. She has also recently featured on the TV programme “Ear to the Ground”.
Growing up on a tillage and vegetable farm in Co. Offaly, Anne Marie always had an interest in food and health. In February 2019, Anne Marie started producing an Irish Beetroot Juice using the beetroot grown and nurtured pesticide-free in the fertile soils of the home farm situated in the heart of Ireland in Co. Offaly. Since 1957, her Dad Billy has been farming tillage and in the latter 25 years vegetables alongside his two sons Alan and William who have helped him grow and expand the family business.
Only 18 months in business and it’s fair to say Feighery’s Farm Beetroot juice has gathered pace and media coverage that has taken even Anne Marie by surprise. She stated “if I’m honest the story of my juice and start up business and the attention it has attracted has both truly surprised and motivated me. Every week something exciting crops up, on as I call it my beetroot juice journey”.
The story behind starting the business and developing the product really came about by default. Anne Marie’s Dad fascinated by the connection between food, nutrition and health had stumbled upon various articles around the health benefits of drinking beetroot juice and in particular helping to lower blood pressure naturally. It was this comments that was the catalyst for the beetroot juice reflects Anne Marie.
New to the shopping list and automatically figuring it would just be a matter of course to pick up a few Irish made bottles, she swiftly realised this was not the case.
“I quickly discovered there was no Irish brand available and what was available to the Irish consumer was imported versions from predominantly coming in from the UK and Germany so there was a definite gap in the market and with the help of Teagasc Research centre in Fermoy and their artisan food specialist Eddie O’Neill, Feighery’s Farm Beetroot juice was developed and retail ready within 9 months. The accelerated pace of development was swift because the harvesting of the beetroot was imminent. Branding, design, nutritional analysis etc taken care of, the harvested washed beetroot was transported to Con Traas of the Apple Farm in Cahir, Co. Tipperary where the beetroot is pressed and bottled.”
Feighery’s Farm Beetroot Juice is made from just 2 ingredients, 70% homegrown pesticide-free Offaly beetroot and 30% Tipperary apples from The Apple Farm. It has multiple health benefits to it, including its ability to lower blood pressure naturally, boost energy levels and promote a healthy immune system with its Vitamin C & antioxidant levels. It is also a source of Folic Acid & Protein. Truly a powerhouse of goodness with taste.
Anne Marie took part in the SuperValu Food Academy and as a result the product is stocked in selected SuperValu’s around the country along with various health food stores, neighbourhood foods, Butchers, vegetable shops and deli’s.
Stockists are listed on www.feigherysfarm.ie and you also have the option to purchase directly online. Gifting someone you love a health boost this season right there.