Carrick-on-Suir cyclist Sam Bennett is "proud" and "super happy" having recorded his first ever World Tour win earlier today (March 7) in one of the most prestigious stages in world cycling.

The 26 year old edged the 3rd stage at Paris-Nice after 4 hours and 31 minutes of cycling, a first for his team BORA – hansgrohe and his biggest win to date.

Sam Bennett is on cloud nine after recording his first ever World Tour stage.

Cold and dry conditions greeted the riders over the 190 km route to Chalon-Sur-Saône.

Bennett built up momentum throughout the stage, finding himself in a perfect position 200m from the line when he sprinted home to claim the stage. 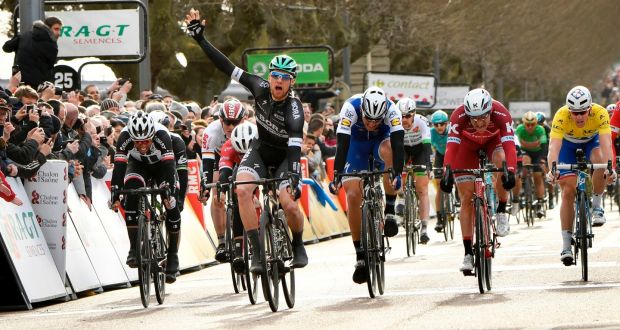 Sam Bennett beamed on Twitter after the stage win: "One of my proudest moments in my career. Thank you to everyone who has been part of the journey".

“I chased that first World Tour win quite a while and I feel big relief now,” he smiled afterwards.

“The boys did an awesome job. First Michael and Juraj brought me up and then with 500m to go Patrick came also from behind with lots of speed. I was able to jump on his wheel and with that momentum I was perfectly placed with 300m to go. I launched my sprint at 200m and I always felt I could win.

“It is just a great feeling now to have that win under my belt. I suffered a lot last year in the Tour de France after my crash in the first stage, but I did hang on and rode all the way until Paris. To finish that Grand Tour I think brought me to another level,” Bennett continued.

"I know Sam since he started and we trained together in his earlier days. We always knew Sam had a huge talent right from the time he was junior. When he's riding he is one of the fastest as he proved today," Kelly added.