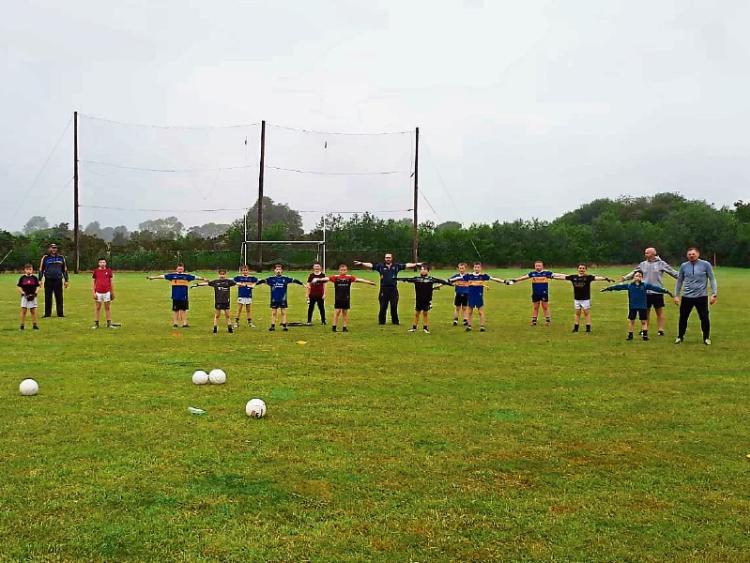 The juveniles of Ballylooby/Castlegrace GAA Club at a recent training session with their mentors, all safely adhering to social distancing. See below how their club lotto is helping the club develop.

Many GAA clubs in Tipperary were forced to close their weekly lottos due to the recent lockdown. Now, after four months or so, most are back up and running including St Patrick’s, Ballylooby/Castlegrace and Moyle Rovers.

Below the three clubs outline some details of their lottos, how they are run, and most importantly how the funds raised are being used to benefit the club and its members but also the wider communities in which they operate.

St Patrick’s GAA Club, in the parish of Drangan and Cloneen, has its lotto running since 2011, using its proceeds to improve and expand facilities to cater for growing numbers of seniors, juveniles, ladies football and indeed a recently-formed camogie club.

The lotto is run fortnightly with all four numbers needed to win  it. The club also run a ‘Second Chance Draw’ every time which gives patrons an increased chance of a prize.

“St Patrick’s have had many jackpot winners over the years and in 2014 had the remarkable phenomenon where the jackpot was won for three draws in-a-row. The odds of that happening are similar to that of being struck by lightning,” he said.

“Presently we are experiencing the longest spell without a winner which has resulted in our jackpot growing to the highest it’s ever been, a whopping €17,000.”

The St Patrick’s GAA Club lotto has been a tremendous success and is now the largest single fundraising initiative within the club. As well as covering the increasing cost of providing for teams the lotto has provided funds for improving and developing new facilities within the club.

The club’s greatest asset is its pitch at Anner Park in Cloneen which is one of the finest and most picturesque in the county with Slievenamon as its backdrop. In recent years new dressingrooms have been built, work has been done to improve the playing surface of the pitch and last year a hurling wall was erected. The club  in recent years has also developed a second playing field in Drangan

In March this year with the outbreak of Covid-19 St Patrick’s GAA Club  like many other clubs  had to make the difficult decision to suspend their  lotto draws. The club  recommenced  on  Tuesday night last, July 21.

As well as being purchased in the local shops the lotto can also be played online and each week the club are delighted to see former parishioners who now reside outside the parish playing   online with patrons as far away as Australia and New Zealand.

Ballylooby/Castlegrace GAA lotto restarted their on Tuesday, July 14 with a jackpot of €7,200, having been on an “imposed holiday” since the previous draw  held on March 10. Their lotto is based on picking four numbers from the 1 to 24 balls, and is held every Tuesday night in the clubhouse.

“As a result of the draw being cancelled finances within the club are very tight now,” according to club chairman, Eamonn Ryan.

“Also due to the lockdown the club were unable to hold normal fundraisers like race nights, take-me-out, etc., traditional methods of fundraising. Now, the lotto is more important than ever to finance the club on a daily basis,” added Eamonn.

“It is the main source of income for the club and allows us to pay the loan used to purchase club grounds and build the facilities. The club lotto also allows for ongoing maintenance and improvements to keep the facility to a high standard. It enables us to meet the standard costs to run a club, e.g. insurance, competition fees, etc.,” according to the chairman.

Ballylooby/Castlegrace GAA is both a juvenile and currently a junior club.  Outside of the local school, the club is the heart of the area, a place for families and adult players to meet and train. Each year the club runs a Cúl camp for  6 to 12 year olds in the area.

Lotto tickets are €2 and are sold online through clubforce, and in local businesses.

The Moyle Rovers GAA Club run their lotto on a ‘Draw the Joker’ formula, based on a 53 playing card deck including the all-important joker.

Their draw is held every Sunday night in Phelan’s Halfway House, Rathronan, and starts at €3,000 with an additional  €250 added each week when it is not won. On two occasions since the lotto commenced eight years ago the jackpot went down to the last four cards before the joker was turned, with each jackpot winner scooping €18,600.

Proceeds from the Moyle Rovers lotto are used to fund the club’s senior and juvenile clubs and help with the cost of maintaining the magnificent facilities at Monroe which are always maintained in pristine condition.

According to club treasurer, Frank Burke, “there are over forty promoters in the club. Needless to say, we always welcome more promoters and more ticket buyers to help us continue the great work we are doing for the promotion of Gaelic games in the parish of Powerstown/Lisronagh.”

The Moyle Rovers’ Draw the Joker lotto will resume on Sunday, July 26, their last draw having been held on March 8 when the jackpot  stood at €8,250.

It will be a welcome return, according to Frank, who estimates the loss during the pandemic as approximately €10,000.