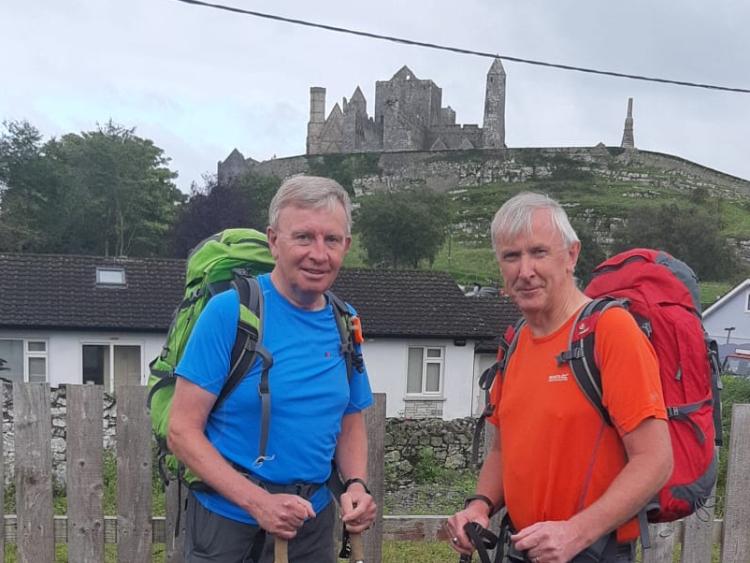 Willie Fahey and Eddie Morrissey who will climb Galtymore, Knockmealdown and Sliabh na mBan on Saturday, September 26 in a Three Peaks Challenge to raise funds for Cashel Lions Club

Cashel Lions Club is taking to the hills! On Saturday September 26 two members of the club, Eddie Morrissey and Willie Fahey will climb Sliabh na mBan, Knockmealdown and Galtymore to raise funds for Cashel Lions Club. The ‘Three Peaks Challenge’ is a new fundraising venture for the club and is intended to replace a range of more traditional fundraisers which cannot be organised currently due to the public health restrictions.

In recent years Cashel Lions Club has depended on public support for fashion shows, bag packing in local shops, church gate collections and street collections to finance the clubs extensive list of community service projects. It is highly unlikely that it will be possible to organise events like these in the next few months due to the current public health guidelines.

Speaking at the launch of the Three Peaks Challenge on Tuesday August 25, the club president Eddie Morrissey said that, ‘Covid 19 has had a phenomenal impact on the fabric and quality of life throughout the entire country and beyond. We have to change how we live our lives on a daily basis and we have to learn to live with the virus. Community organisations will also have to adapt and change or they will not survive’. The club treasurer Willie Fahey also stated that, ‘Since 1961 Cashel Lions Club has served the people of Cashel and surrounding areas. This has only been possible due to the generosity of the local community who have given generous support to all our fundraisers for almost sixty years. We are now asking the local community to support what is a new fundraising activity for the club’.

Eddie and Willie, who are also members of the Mid Tipp Hillwalking Club, are currently in training for the Three Peaks Challenge which they expect will involve between eight and ten hours on the hills depending on the weather conditions on the day. They plan to start on Ireland’s highest inland peak Galtymore and travel on then to Knockmealdown which stands at 794 metres above sea level and finish on Tipperary’s iconic mountain peak Sliabh na mBan where a verse of Slievenamon will be sung or maybe recited depending on the energy levels at the end of the day!

In addition to local projects the club also coordinates the Team Hope Shoe Box Appeal and supports a range of third world causes through the Lions Club International Fund (LCIF). Cashel Lions Club is asking for sponsorship from the local community for the Three Peaks Challenge. In keeping with public health guidelines and in the spirit of modern life Cashel Lions Club members will not just be on the hills they will also be online.

Members of the public can make a donation online at iDonate.iecashellionsclub 3peakschallenge. Each member of the club also has a sponsorship card and will accept sponsorship from members of the local community who wish to support Cashel Lions Club.

The club is also extremely grateful to Tim Molan and the staff of Affinity Credit Union Cashel who are providing a variety of channels for people to support the fundraiser. There is a ‘Three Peaks Donation Barrel’ in the Credit Union where credit union members and non-members can drop a donation into the barrel during office hours for the next four weeks.

People may also lodge money at the counter to a Lions Club Credit Union Account or they may make a donation by phoning the Credit Union and using their debit card and credit union members may also use the credit union’s online facility to make an online donation.

‘We live in strange and challenging times and every euro contributed to the Cashel Lions Club Three Peaks Challenge will make a difference to the quality of life in our local community’, stated club president Eddie Morrissey as the club embarked on a four week campaign to raise awareness of the fundraiser and to raise funds for Cashel Lions Club.