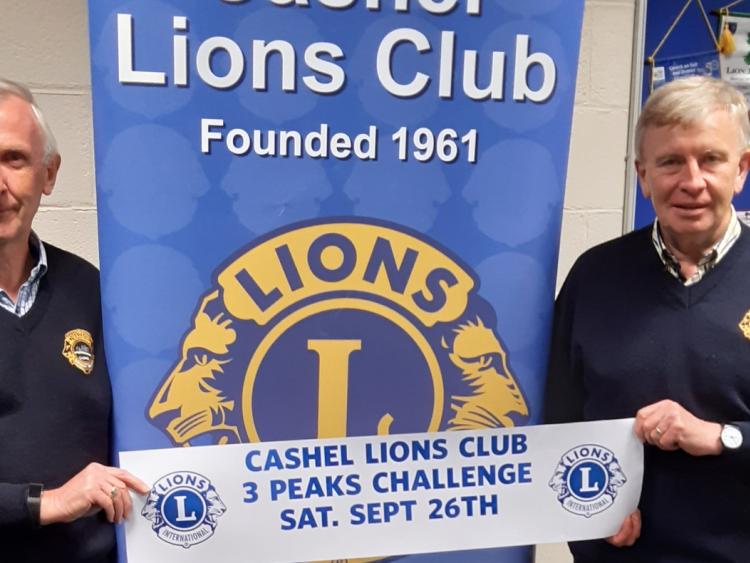 Three peaks, three counties, one day! Almost 8,000 feet or just under 2,500 meters of a total climb followed by a somewhat faster but equally long descent.

That’s the challenge facing Eddie Morrissey and Willie Fahey as they take on a Three Peaks Challenge on Saturday September 26 to raise funds for Cashel Lions Club.

Plans are at an advanced stage for the Three Peaks Challenge which will start with Galtymore which straddles the border between Tipperary and Limerick. From there it’s on to Knockmealdown which will see Eddie and Willie set foot in both Tipperary and Waterford. The final stage of the challenge will commence on home soil in a ‘valley near Slievenamon’ .

This is a new fundraising venture for Cashel Lions Club. The traditional fundraisers like fashion shows, bag packing and street collections are not feasible due to public health guidelines so Eddie and Willie have decided to swap their suits and hi-vis Lions club jackets for their walking boots and take to the hills for the day.

All money raised will be used to support a range of community service activities which Cashel Lions Club has provided for the people of Cashel and surrounding areas for almost sixty years.

This service to the community has only been possible through the generosity of the local community and local businesses that have always been generous in supporting a range of fundraising activities.

Donations can also be made through a range of options, including a Three Peaks Challenge Barrel, at Affinity Credit Union, Cashel.

Each member of Cashel Lions Club also has a sponsorship card and will gratefully accept sponsorship for the event.
The target is €5000 and every cent raised will be used locally to fulfil the Lions Club motto ‘where there’s a need there’s a Lion’.

Eddie Morrissey and Willie Fahey have the boots waxed, the walking gear packed and the Child of Prague dusted down as they hope for the Indian summer to last at least until about 6pm on Saturday September 26.