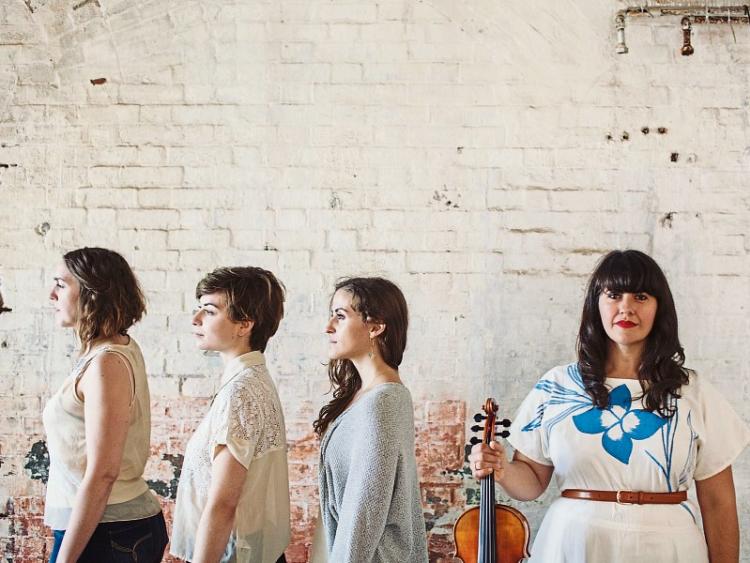 Hot on the heels of the first show of 2019, Clonmel World Music is back in Raheen House Hotel on Thursday, January 24 with a very special band, Laura Cortese and the Dance Cards marking the groups first visit to Ireland.

Laura Cortese wears many hats: fiddler, singer, songwriter, multi-instrumentalist, bandleader, community builder, and creativity instigator. Her band Laura Cortese and the Dance Cards is a quartet of singing string players whose original music draws from diverse traditions and experiences to create a broad-minded yet clear-eyed sonic vision. It’s based in the lyrical rituals of folk music while exploring new territories, moving seamlessly from gauzy, ethereal vocal harmonies to rowdy indie-rock percussion to propulsive fiddle melodies directly from Appalachia or Scotland.

Before forming the Dance Cards, Laura Cortese’s career included stints as an instrumentalist with Band of Horses, Pete Seeger, Rose Cousins, Jocie Adams (of the Low Anthem), and Uncle Earl. The collective credits among the Dance Cards exist on a broad continuum from Darol Anger to Amanda Palmer, from the symphony to prog rock, and even into protest music like Pete Seeger and Michael Franti.

This  is a band who draws inspiration from diverse experiences, communities, and musical traditions, melding them into a refined sound that’s broad-minded but clear-eyed.

Their lyrics deftly explore themes of heartbreak, independence, and the restless search for a home in the world. It’s a new kind of pop music: born from the folk tradition, traveling the roads of 70s California, and delivered with power and heart.

Doors for the gig will open at 8pm. There will be no support act, and the band will start at 9pm prompt. Tickets are available online on www.clonmelworldmusic. com, in Marians Bookshop Clonmel, South Tipperary Arts Centre Clonmel and from Gerry Lawless on 086 3389619.