Emly get the better of Arravale Rovers in West JAFC 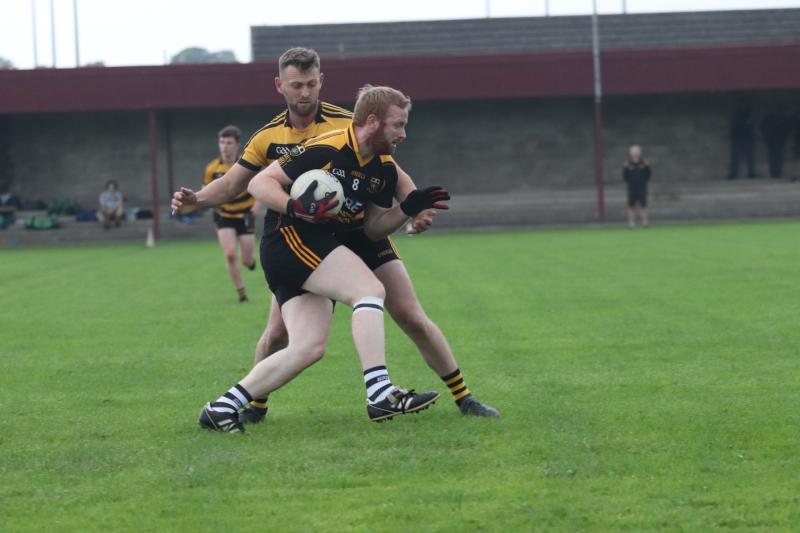 Emly made it two wins on the bounce with victory over Arravale Rovers in the group stage of the AIB West Junior A Football Championship last Friday night in Emly.

This result was rarely in doubt from an early stage and despite a late flurry from Arravale Rovers – who played most of the game with fourteen men - to put some respectability on the score line, it was Emly who were deserving of the victory.

Emly dominated the game from the start and were three points to the good by the seventh minute. Adrian O’Donoghue opening their account and this was added to by Jason Ryan from a mark and also Shane Carroll. Arravale were working the ball up well but struggled to break past the Emly rear-guard in the final third.

Arravale suffered a big blow when Michael Sharpe was shown a red card in the ninth minute. Emly continued to dominate to the water break with their midfield and half forwards causing big problems going forward. Both midfielders, Joey Lonergan and Paul O’Heney pointing along with centre forward Aidan O’Heney. Emly ahead 0-6 to 0-0 at the first water break with five of their six scores coming from play.

The Rovers introduced Adam Dunne at the water break for the injured Paddy Dalton and he made an immediate impact when opening Arravale’s account. Tony Byrnes and Fergal McNamara were getting a grip around midfield with Conor Leahy and Jack Ryan who were making runs from the half back line.

Their hard work paid off and they cut the deficit in half though Emly did find another gear and in the space of three minutes kicked 1-2 to dent any hope of an Arravale comeback. Aidan O’Heney getting on a lot of ball doubled his tally before Joey Lonergan added another.

Jason Ryan was a constant threat in the full forward line. He finished to the net after receiving a pass from Shane Carroll. The move originating on the Emly sixty five yard line when they overturned Arravale Rovers in possession. Emly ahead at the break by 1-9 to 0-4.

Shane Carroll added to his tally on the resumption. Arravale were working the ball down the field led by Tony Byrnes and Fergal McNamara but struggled with their accuracy in front of the posts. The game was effectively over in the sixth minute of the half when Shane Carroll rattled the net. The final quarter belonged to Arravale Rovers as they outscored Emly 1-3 to 0-1 though both teams did kick some bad wides.

Adam Dunne added to his tally to finish with five points while Brian Roche got in for a goal. They could have had a second goal when Johnny Lowry hit the cross bar and Andrew Richardson’s shot was blocked for a 45. Bob McEniry did have a late chance for Emly when he got in on goal but his shot went wide of the post. Emly ran out deserved winners, 2-11 to 1-7 for a second win in a row, while for Arravale it was their second defeat in a row as they remain without a win.

Who should be the next Tipperary senior hurling manager?

Expect delays on Tipperary road due to road surfacing works