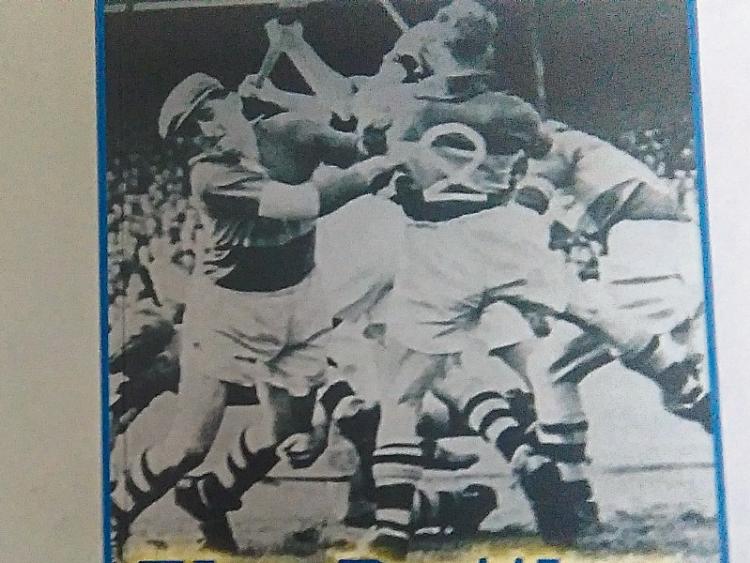 The death took place on Sunday, October 16th, of Hurling right corner back on the Tipperary Team of the Millennium, Mickey ‘The Rattler’ Byrne, aged 93.

He was the winner of five senior All Ireland medals with Tipperary and a pivotal member of the great Thurles Sarsfields team over three decades, winning a record fourteen senior county titles.

He was also one of the great characters of Tipperary GAA, known for his witty one-liners, many of which featured in a biography of ‘The Rattler written by distinguished Thurles journalist and former editor of the Tipperary Star, Michael Dundon.

‘The Rattle’ died on the morning of Thurles Sarsfields’ bid for a 35th county title in Semple Stadium on Sunday afternoon.

Born in Dublin, on September 10th, 1923, The Rattler's career started in Thurles C.B.S. where he first tasted success winning a Dean Ryan Cup Medal in 1939. Following his exploits with Thurles C.B.S. and his club Thurles Sarsfields, Mickey's stock was rising and he joined up with the Tipperary Minor hurlers when he was seventeen and from there he progressed to the Tipperary Senior ranks.

Mickey excelled at club level and was part of the record breaking Thurles Sarsfields sides that dominated Tipperary hurling in the 1940's, '50s and '60s amassing for Mickey a record haul of fourteen Tipperary Senior Club medals. That record speaks for itself starting with a three in a row, 1944, '45 and '46. The next title came in 1952 before the first of two five in a row successes from 1955 to '59 and then again from 1961 to '65, Mickey being the tender age of 42 collecting his last county medal. He also captained his side to victory in the '55 and '56 finals.

Previous to that Mickey won his only County Minor Hurling Medal in 1940.

Two Oireachtas Medals in 1945 and '49 complete the remarkable collection of medals for a truly remarkable character.

In all 'The Rattler' made 34 Championship appearances for Tipperary before he retired from inter-county hurling in 1960.

Mickey Byrne was named at Right Corner-Back on the Tipperary Team of the Millennium in 1999.

At the time of his passing Mickey was also President of Thurles Sarsfields G.A.A. Club.

Tipperary County Board Chairman Michael Bourke paid tribute to the late 'Rattler' on hearing of his passing - "Mickey Byrne better known as The Rattler was a unique character whose death leaves a huge void in the annals of Tipperary Hurling and Folklore.  As Tipperary County Board Chairman, I am privileged to have known The Rattler and to see at first hand the charisma and warmth that he exuded to everyone in his presence. His record on the hurling playing fields speaks for itself and will stand the testament of time for one who dedicated his life to Tipperary and his club Thurles Sarsfields.  While we all mourn the sad loss of Mickey his loss will be felt most by those who loved him and knew him the best, his family. On behalf of Tipperary County Board I extend our heartfelt condolences to the Byrne family and also to his club, Thurles Sarsfields, on the sad passing of Mickey. His family have lost a father while Tipperary hurling has lost another of its greatest sons."

Arriving in The Cathedral of The Assumption on Wednesday morning for requiem mass at 11am with burial immediately afterwards in St. Patrick's Cemetery, Thurles.