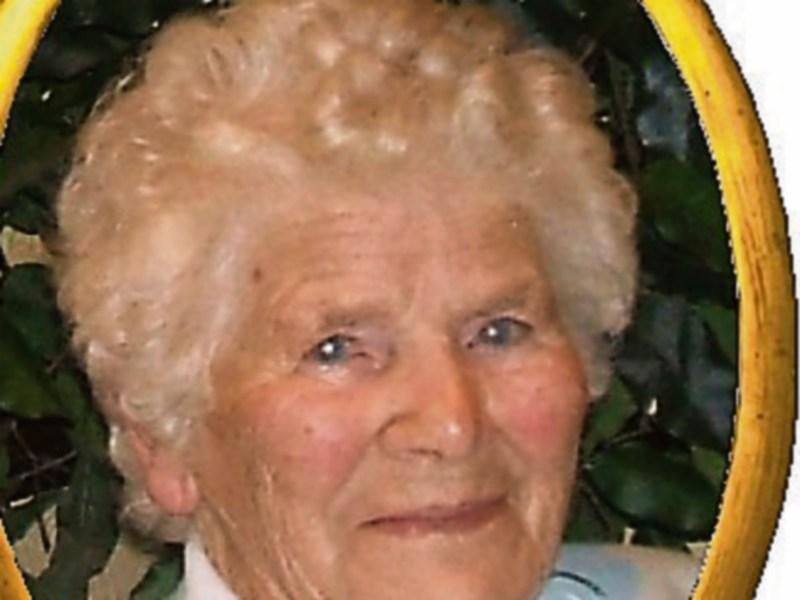 The parish of Emly lost a true character, and one of its best loved residents with the passing of the late Bridget (Biddy) Brennan on December 1st at St Anthony’s Nursing Home, Pallasgreen at the great age of 98 years old.

Her passing signalled the last link of the Fitzgerald family of Cromhill, Kilteely.

She was born on the 14th of May 1918 to the parents of Patrick and Bridget Fitzgerald of Cromhill, Kilteely and was reared into a family of five girls (Maggie, Katie, Eileen, Joanne and Mary) and four boys (Dick, Patsy, Tom and Mick). There were some great childhood memories of days spent in Cromhill when times were somewhat different than today, but they got on without any fuss. Biddy’s longevity genes were passed on by her parents who lived well into their nineties. After her young days she didn’t have far to travel to meet her future husband Tommy Brennan of Emly, a short distance from Cromhill.

On the 17th of August 1941, they cycled the journey to St Michael’s Church Tipperary to get married. After marrying Tommy her beloved husband they lived in the village of Emly until 1954. Soon afterwards they made their home in Gurteen on the outskirts of Emly Village, where they spent their life happily together raising their family of eight girls (Mary, Catherine, Chris, Breda, Frances, Joanne, Joan and Valerie)  and five boys (Brian Kevin, Tom, Ailbe, Liam and Paddy).The couple also had many wonderful friends and neighbours. Those who knew Biddy recognised her as a woman who was strong, faithful and true. She was a devoted wife and mother and loved to spend all her spare time with her family and neighbours. Biddy was a fantastic mother who loved her family dearly and many happy days and also many busy hours were spent there nurturing a large family. She received a set back in 1989 when she became widowed as her husband Tommy passed away after a short illness. Biddy wasn’t one for lying down and she soon picked up the pieces. She now took on the role of both parents to her family and these times kept her busy.

Years later three other set backs affected her with the death of her daughter Mary and grandson Kevin in 2000, following this her daughter Catherine also passed away in 2002. It took her a long time to come to terms with these sad events, but true to her character her desire to be strong for the rest of her family kept her going.

She enjoyed the social life and her family were always happy to take her out to the odd dance and music sessions in the local hostelries, where she became a well known character. The night usually finished with a sing song and Biddy in the thick of it. She was a woman with an easy going sense of humour, which she never lost. Throughout her life she touched many lives and will forever remain in the hearts, minds and memories of those who knew her. Family occasions were always special and Biddy was a guiding light and an inspiring presence. She loved her family and her family adored her. All of her grandchildren have wonderful memories of spending long summers with "their remarkable legend". When they congregated together, as they often did, the craic was mighty. The last occasion they got together was in Gurteen on Friday 17th July 2015 when the family had a double birthday celebration, Tom’s 70th  and Frances’s 60th. While everyone was congratulating the birthday couple Biddy captured all the attention. This remarkable lady was still holding court, the Matriarch, she was just admired by so many.

Her home was a regular port of call for historians wishing to avail of her excellent recall of events from bygone days. Biddy loved when visitors called to her home, where they were always assured of the warmest of welcomes. She loved a good conversation, recalling old times in an interesting way. Biddy was blessed with a brilliant memory and could recall events from many years ago in great detail. She lived independently for a long number of years and it was only shortly before her passing her family decided for security and health reasons her new home would be in St Anthony’s. Her stay there was a happy one and she enjoyed the company of other residents.  As a country woman the long trail of the cows coming in for milking in the summer evenings nearby proved a great topic of conversation. The trains passing daily in the distance fascinated her because of her husband’s long service to CIE. Fittingly and perhaps in a gesture of encouragement from Tommy, a train stopped the funeral cortege from her journey to Ailbes Church at her removal.

Her family visited her regularly at St Anthony’s often coming from long distances to be by her side, But on Thursday December 1st with her daughters fussing around her she was slipping from this world. She didn’t go until she was ready and the last act was left to local parish priest Fr Pat Burns who annointed her, a few words between the two and she slipped quietly to her eternal reward. While the end may have come, she has left behind a family of which she was proud but more importantly a family who are proud of her.

Her funeral was from Frazer’s funeral home Galbally to St Ailbe’s Church Emly. Requiem mass celebrated by her friend Fr Rochford with Fr Pat Burns and Fr Moloney. Readings were read by her nephew and grandson and her grandchildren read the prayers of the faithful. In his homily Fr Rochford paid a glowing tribute to a woman whose love and affection she was held by so many. He recalled her life and described the huge, affable personality that everyone loved. She was a woman of strong faith, a loving wife, mother, hardworking, and a woman who loved her family.The music and singing of the Emly Parish Choir enhanced a beautiful ceremony. Following Mass the eulogy was delivered by her son Ailbe who recounted the life and times of a mother and family life. The final tribute to Bridget’s life was a beautiful rendition of “ Kilcommon My Home”  her favourite song, sang by her son Paddy.

Her final journey was to the adjoining cemetery where she was laid to rest alongside her beloved husband and infant children Joanne and Brian Kevin, as the train passed by sounding its whistle once again to welcome her home. Bridget, may the sod of Emly cemetery rest lightly on your heavenly soul.

Our family is made less by Mum’s absence, but we were made so much more by her presence, her love and her faith.

We thank each and every person who has offered their support and love to us. we will never forget her and we are forever grateful for the years we had with her.