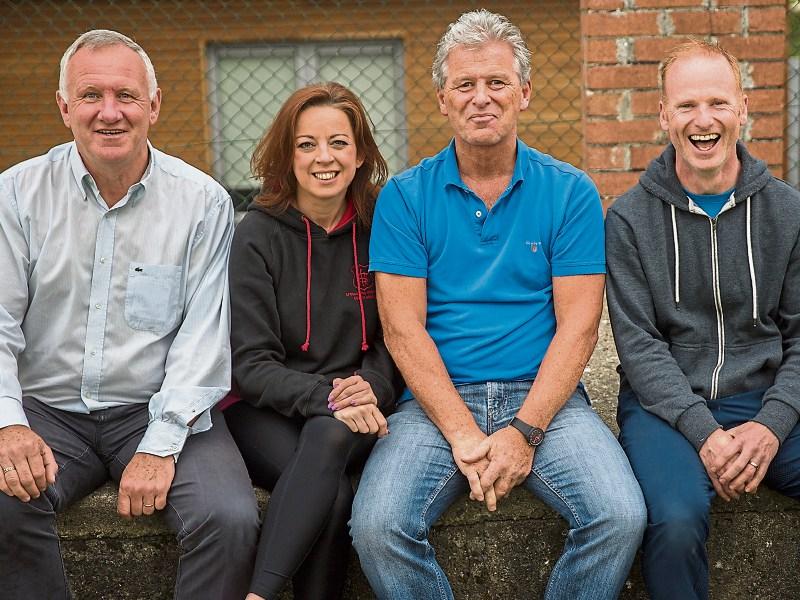 Jerry Shanahan (second from right), with the last three principals with whom he has served. They are Shay Bannon (left), current principal Karen Steenson and Des Feeney.

A distinguished teaching career that has spanned four decades is coming to an end.

Jerry Shanahan is retiring as deputy principal of Clonmel High School, which has been a home from home for him for the last 35 years.

He's originally from Cashel, and apart from his time spent studying in Dublin in the late seventies and early eighties has lived in the town all his life. But his name has also been synonymous with Clonmel's High School since 1982.

After completing his degree at UCD in 1980 and his H. Dip at the same university the following year, he contemplated going to Abu Dhabi, the capital of the United Arab Emirates, to work on the oil rigs.

However he had a change of heart when he had the chance to serve two spells as a substitute for teachers who were absent through illness at the High School.

When another teacher left he filled the vacancy in 1982 and was made permanent the following year. For 20 years he taught a range of subjects, most notably Geography as well as History, English, Religion and CSPE (Civic Social Political Education) until his appointment as deputy principal in 2002.

The transition from the classroom to the office and the role of second in command proved a smooth one, a happy state of affairs that he attributes to the "huge help" he received from the staff.

"It could have been difficult but the staff were so good", he says.

He has worked with seven principals during his long service at the school - as a teacher with Br. Malone, Br. O'Keeffe and Br. Madigan and as deputy principal with Pat Power, Shay Bannon, Des Feeney and current principal Karen Steenson.

"The camaraderie with the staff would be among the highlights of my time here", he says.

"We had lots of good laughs and got through troubled times together. Everyone here was a great support and I'd like to think that I was a support to them as well.

Since I was appointed deputy principal Pat Power, Shay Bannon, Des Feeney and Karen Steenson have all been top-class people".

When Jerry Shanahan secured the teaching job all those years ago he joined a teaching staff of 30, which has since grown to 56.

Student numbers have risen substantially from 450 in 1982, and despite the fact that the school now caters for more than 700 students he has nothing but praise for those who have worn the school's wine-coloured jumpers up to their Junior Cert and the black pullovers in the following years.

"The boys in the school were respectful and had all of the qualities you would like to see in students. They offer huge hope for the future", he says.

He has seen many physical changes at the school over the years, with extensions and renovations providing extra classrooms, basketball courts, a gym, hurling wall and atrium.

There have also been significant changes in education.

"The job became more complicated over the years but in so many ways that complication is for the betterment of the students", he says.

"We're now more accountable than schools were many years ago and that's not a bad thing at all".

He has every confidence for the future well-being of the school that he will soon leave.

"The environment we are in now means that if a school isn't moving forward then it's moving backwards, and the High School is looking forward all the time".

Jerry and his wife Phil have been married since 1984 and the couple have three sons - Robbie, Ian and Larry.

Although he has had offers to become involved in other educational projects when he steps down he would like to get involved in something completely different, even though he has enjoyed his time in education.

He also intends to travel, with several destinations in Europe on his radar.

The secondary school year is now drawing to a close and his official retirement date is August 31st.

He says he has an affinity with the Class of 2017, as both he and they are leaving the High School and moving onto another phase of their lives.

"The first day I walked into the school it felt like home and it still does. I'll be dropping in regularly to see how things are going", he says.

"The High School has been good to me and will always be a part of me".

For Sale! Stunning Clonmel period mansion - yours for E1.35million