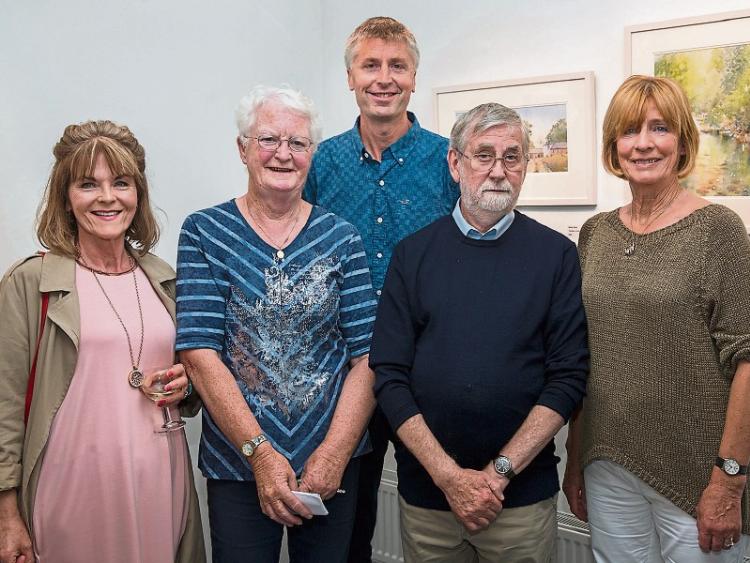 At the opening of the exhibition 'The Colour of Water' at the South Tipperary Arts Centre were local artists Miriam Burke, Deanna O'Brien, David Purcell, Ray Osborn (tutor) and Mary Burke.

Cllr. Roger Kennedy, Leas Cathaoirleach of Tipperary County Council, attended the opening, which shows the watercolour paintings of a diverse group of artists. James O’Donoghue, local artisan maker of Longways Cider, was on hand to do a tasting for over 80 guests.

Raymond Osborn has been running an advanced watercolour painting course for a talented group of artists in the South Tipperary Arts Centre for the past number of years.

Born and raised in London, Ray Osborn has lived, worked and painted in Ireland for nearly half a century. He exhibits annually in the Kilkenny Arts Festival.

He is an award-winning member of the Watercolour Society of Ireland.

In his speech, Ray said that Miriam Burke had produced “three superb watercolours, full of light, full of atmosphere…the only word to describe them is ‘class’.”

Deanna O’Brien is never satisfied with her work, but Ray singled out her painting ‘Old Friends’ for composition, execution and creative awareness.

Mary Burke, he joked, “has never done a good painting – according to Mary Burke”, adding that he thinks she’s “a fabulous painter”. He praised her painting of a barn, saying “she’s taken a mundane subject and turned it into a beautiful painting.”

David Purcell is a recent addition to the group and Ray said, regarding a painting of Youghal, “when I looked at the sky in his painting, it blew me away.”

The artists in the group hail from as far afield as Wexford, Waterford, Dungarvan and Kilkenny, as well as the four from Clonmel.

As part of the South Tipperary Arts Centre Outreach and Education programme, there will be an activity pack available where visiting children (and their grown-ups) have a visual treasure hunt to find different elements in the paintings.

“It’s a ‘Where’s Wally’-type game where the goal is to look for different images in the artwork. We want to encourage the children to look really closely at the paintings and to make it an interesting visit to the Arts Centre” explained Arts Centre Manager, Cliona Maher.

A guided visit is also available for groups.