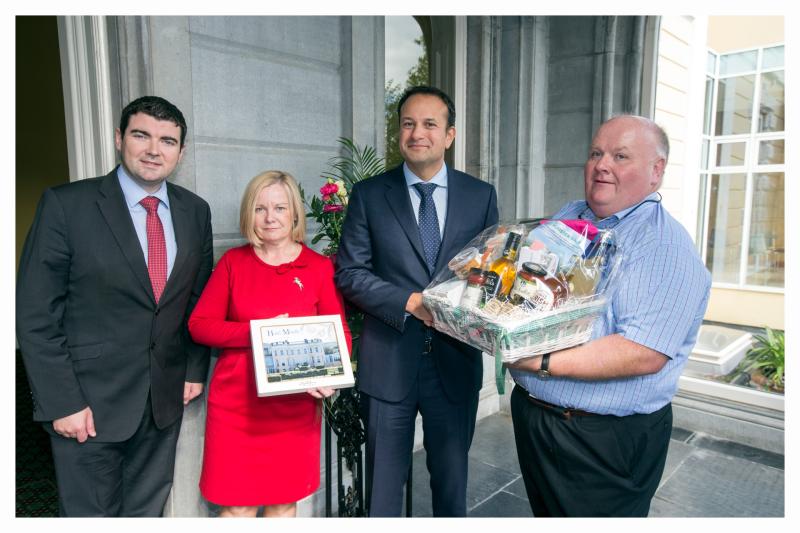 During his recent visit to Tipperary before the start of the recent Dáil term, Taoiseach, Mr Leo Varadkar was presented with a hamper of Tipperary Products.

The 2017 National Famine Commemoration will take place at 3pm on Saturday next, 30th September 2017 at the Famine Warhouse 1848 in Ballingarry, County Tipperary. The Warhouse has been recognised as a National Monument and has a unique place in Irish history especially the dark years of An Gorta Mór.

The Commemoration will be hosted by the Minister for Culture, Heritage and the Gaeltacht Heather Humphreys T.D. in her role as Chairperson of the National Famine Commemoration Committee. The Guest of Honour will be An Taoiseach Leo Varadkar T.D. who will also lay a wreath on behalf of the Irish People.

The formal State ceremonial event, which includes and wreath laying ceremonies will be preceded by a community programme culminating in an address by An Taoiseach.

The community programme will feature performances by Mícheál Ó’Súileabháin, Michael Coady the Cecilian Choir from the Ursuline School, Thurles and Banna Cluain Meala. It will also feature members of the local community including Dr Thomas McGrath, Carmel O'Brien and Aiden Mullally and Abaigeal Maher from the Presentation Secondary School Ballingarry.

This event is open to the public. Shuttle Buses will be available from Ballingarry Village (from 12 pm to 1.30pm) and the Commons (12.30 pm to 1.30pm) to transport those wishing to attend to the historic site, returning following the conclusion of the event at approximately 4.30pm. There will be a marquee on site to protect those attending the event from the rain.

Speaking earlier this week, Minister Humphreys said:
“I am very much looking forward to this year’s National Famine Commemoration. The Famine Warhouse 1848 is a unique venue for the Commemoration, and the local community and our colleagues in Tipperary County Council have prepared a powerful artistic programme to honour the memory of An Gorta Mór and its victims”.