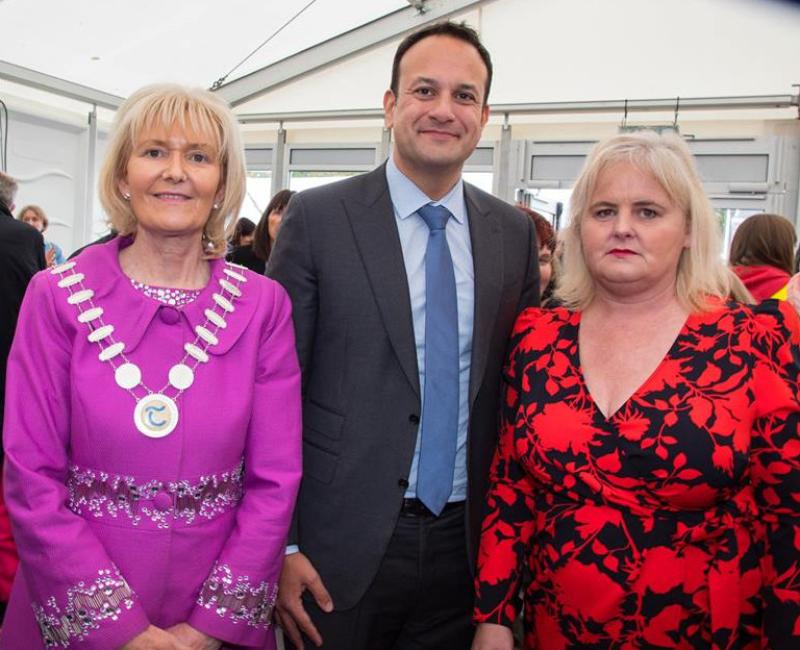 An Taoiseach Leo Varadkar T.D. is pictured with Dr Phyll Bugler, County Cathaoirleach and County Councillor Imelda Goldsboro at the National Famine Commemoration ceremony in Ballingarry at the weekend

This was the first time Ballingarry was the location of a formal State National Event. The Taoiseach said the best way to remember those who died in Ireland’s Great Famine of the 1840s is to help their “modern-day equivalents” by welcoming those who have suffered through natural disaster or oppression.

Ms. Heather Humphreys, T.D., Minister for Cultured, Heritage and the Gaeltacht, and Dr. Phyll Bugler, Cathaoirleach of Tipperary County Council, attended the event at the Famine Warhouse 1848, once the home of the Widow McCormack and her family and now a commemorative visitor centre run by the OPW. They were joined by hundreds of spectators, including ambassadors or chargés d’affaires from 48 countries as well as representatives of the UN High Commission for Refugees, the European Commission and European Parliament.

Mr. Varadkar told the crowd the Irish Famine had “shaped our destiny” through its effect on our culture, society, politics and approach to the problems of the world. “The Great Famine was a cataclysm on a scale never witnessed on this island before, and yet people endured, survived, emigrated and, above all, remembered,” he said. “It has become part of our national consciousness and, indeed, part of our national sub-consciousness.” The scene outside Ballingarry was an intersection of “two important events,” according to the Taoiseach - the suffering of the Famine and the uprising of 1848 which was quickly repelled. A “direct line” connecting the events of Ballingarry ran through the subsequent foundation of the Irish Republican Brotherhood, the struggles of the Land League, the 1916 Rising and the achievement of Independence. While the “Great Hunger” left many emotional and social wounds, its positive legacy was the contribution since made to the world by our emigrants, which began when so many people left in the 1840s and subsequent years, he added. “For so many of our diaspora, the Famine was the foundation stone of the story of their families. For many, it was the turning point in their family history.” Another positive from the Famine, he continued, was the solidarity shown to other people who have gone through similar events. He referred to the contribution of Ireland today to helping those in such situations, from investment in delivering nutrition to mothers and their children, to our Naval Service assisting people who decide to cross the Mediterranean Sea to seek a better life, to our soldiers on peacekeeping duties with the UN in various countries.

As a Prelude to the ceremony, the large crowd present were entertained by local musicians, the Mangled Badgers, followed by a performance from Banna Cluain Meala. Local County Councillor, Imelda Goldsboro, was on hand to lead An Taoiseach to where he was asked to plant an oak tree and to unveil a commemorative plaque specially commissioned for the occasion.

The ceremony included wreath-laying by diplomatic representatives, singing by students from the Ursuline Convent in Thurles, while teacher Carmel O’Brien and poet Michael Coady, read a poem, Amhrán na bPrátaí, by Máire Ní Dhroma translated into English by Michael Coady piano improvisations on the traditional air by Mícheál Ó Suilleabháin, and prayers were led by Rev. Barbara Fryday and Fr Derry Quirke. The wreaths will subsequently be placed on graves in the graveyards in the parish.

Local historian Dr. Thomas McGrath spoke of the role played by the Famine Warhouse in history. A poem, “Siberia,” by James Clarence Mangan, was read by Aiden Mullally and Abaigeal Maher, head boy and girl from Presentation School, Ballingarry. Dr Phyl Bugler, chairperson of Tipperary County Council, read from an excerpt from Fr. Philip Fitzgerald’s Report on Famine in Ballingarry to the National Repeal Association published in Tipperary Free Press on 8th May 1847.

Minister for Culture, Heritage and the Gaeltacht Heather Humphreys, also chairwoman of the National Famine Commemoration Committee, said annual commemorations have now been held in 8 different counties across the country.

Events concluded with a minute’s silence, the playing of the Last Post and Reveille, the raising of the national flag and the national anthem. All present were then invited into the large marquee beside the House to be treated to an array of refreshments, while An Taoiseach mingled amongst the crowd.

The event can viewed on the RTE Player through the following link: httpshttps://www.rte.ie/player/ie/show/rte-news-special-1516/10782471/