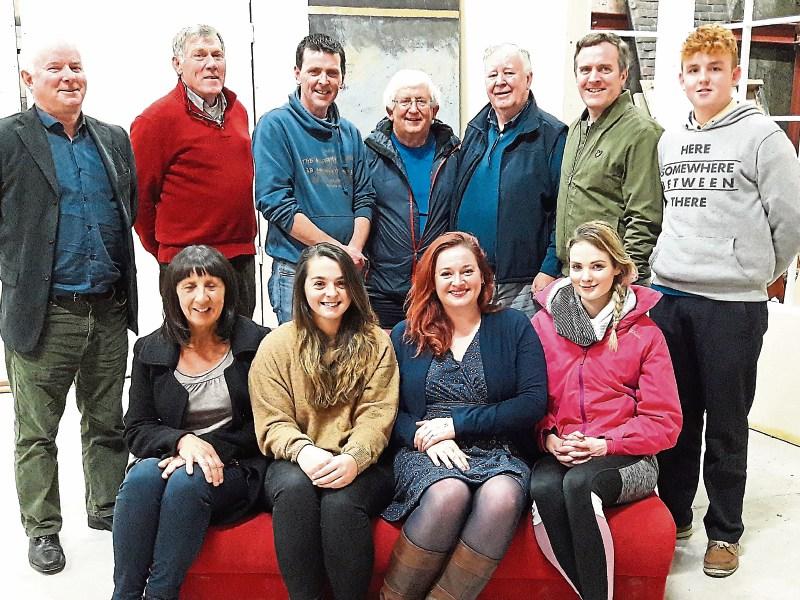 Rehearsals for a play such as this can be complex. Technically the play is set in three different locations that change in each act, which is a challenge for the designer, stage manager and stage crew. As a period piece, each set has to look authentic, capture the right mood and allow the actors relaxed and flexible movement on stage. In addition, the cast have to work in different locations and make them seem natural and everyday to the audience while at the same time maintaining character, accents and delivering the funny lines at the perfect time. No pressure at all!

As you might imagine from all this, rehearsals are challenging, hard work but very rewarding to say the least. Some of the new members to the cast are really working hard to get everything right. Thomas Caffrey who plays Charlie Wyckham says the rehearsals are great fun and highly energetic. Thomas who is still in school is learning a lot of stagecraft and technical skills along the way. Lorna Healy is Amy Spettigoe whose character is also looking for the right man and finds herself in all kinds of bother as a result. Lorna says she really loves the support from all the other cast members and the teasing and banter make the rehearsal process on cold nights very enjoyable. She says she is also learning a lot from director Liam Ryan about staging this type of play in relation to the timing and perfection required. Aoife Dennihy (Kitty Verdun) and Deirdre Hayes (Ela Delahay) are equally enthusiastic about the show and cannot wait for opening night on November 20th. New members bring great energy and vitality to any production and also new ideas and thinking about roles and performance so this is all good news for Thurles Drama Group.

The real advantage for the group in this play is the mixture of new and experienced members working together on a challenging script. Experienced actors like Margaret McCormack and Pat Loughnane, John O’Sullivan along with people like John Quinlan from Moyne Players bring that layer of insight and know how that makes the complicated seem easy. They also bring a great sense of comic timing, which cannot be taught. This is only developed over years of performing and being comfortable in the moment on stage where is not about the line but creating the effect or impact that is needed through a movement, a gesture or a look. This combination of new and experienced will bring a great energy and spontaneity to the show that will bring the house down.

Opening night for Charley’s Aunt (November 20th) will be a benefit night for the Drama Group Building Fund to help finish work on the Brid Ryan Centre in Friar Street. All support would be greatly appreciated. You can also find out more or support the group on Facebook by looking up the Thurles Drama Group page.