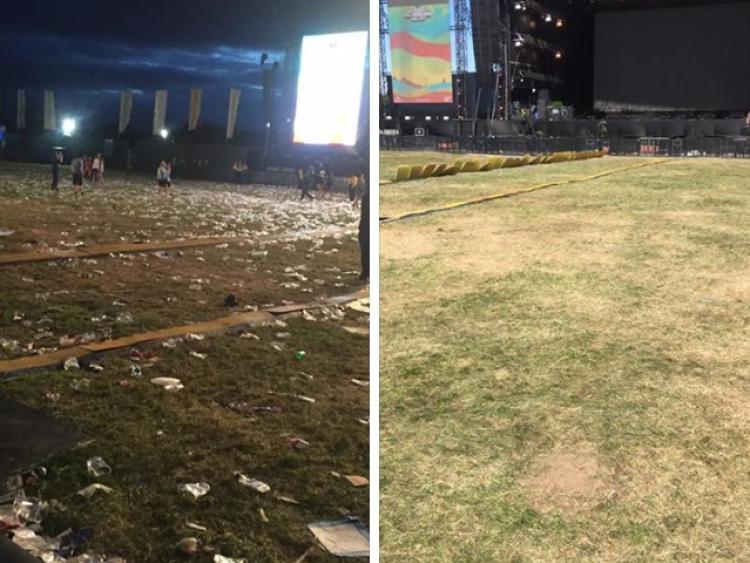 A collage from the BBC Radio 1’s Big Weekend in Hull, showing the grounds before and after the Ryans Cleaning teams worked their magic

Local Thurles company Ryans Cleaning have had one hell of a year keeping some of Ireland and the UK’s top events clean and green! The firm which has recently been shortlisted for no less than two Green Awards has had an eventful year and would like to thank their team, clients suppliers for their support. Here is a selection of Ryans Cleaning highlights from throughout 2017.

Ryans Cleaning were shortlisted by the Small Firms Association for a National Small Business Award. January blues were kept at bay with shows like Big The Musical, La Cage Aux Folles West Side Story at the Bord Gáis Energy Theatre and rock band Black Sabbath taking to the stage at the 3 Arena. Horse racing also stepped up a gear at the many racecourses Ryans Cleaning serviced as the build-up to Cheltenham really built momentum.

FTMTA Farm Machinery Show 2017 took place in early February and was their largest and most successful event so far with a total of nearly 21,000 visitors to the show over the three days. The 3 Arena ensured there was something for everyone in February with Cirque Du Soleil, Billy Connolly, Drake, Jack Whitehall and Strauss Festival Vienna Orchestra. While the Bord Gáis Energy Theatre also offered a varied programme which included Hamlet, Dirty Dancing - The Classic Story, Million Dollar Quartet music from The Divine Comedy.

Elaine Ryan was announced as Managing Director for Ireland and the UK. Elaine has been with the company since 2009 when she started as Financial Controller, quickly establishing an active role within the company, she was promoted to General Manager for Ireland in 2012. During this time Elaine helped to grow the company turnover from €3.3m in 2009 to €6.1m in 2016.

National Hunt Racing Festivals at Fairyhouse and Punchestown took place in April. Punchestown enjoyed an all-time record-breaking crowd  cleaned up after 122,557 patrons over the five-day event.

BBC Radio 1’s Big Weekend in Hull was a massive affair with acts like Little Mix, Katy Perry, Stormzy and Kasabian to mention but a few of the big names who entertained the massive crowds in attendance. Meanwhile, Ryans Cleaning also had a team in the North of Ireland cleaning at the annual Balmoral Show in Belfast.

The Dubai Irish Open at Portstewart saw the start of a busy July and then it was full steam ahead as the team through 15,000 refuse sacks and 7,000 wheelie bins to keep the venue clean for over 150,000 patrons at the Galway Races Summer Festival. Ryans Cleaning, Event Supervisor, Sinead Cleary clocked up a whopping 89 miles on her pedometer during the festival! Other members of the team helped The Body Coach smash the Guinness World Record for the largest HIIT Class while cleaning the venue at Hyde Park on July 5th in heat. Then it was on to Latitude Festival at Henham Park for more festival cleaning. The real treat this month had to be U2 playing at Croke Park as part of The Joshua Tree Tour.

The festival frenzy continued with the Lytham Festival, the largest music event in Lancashire overlapping with the Wilderness Festival at Cornbury Park. This meant Ryans Cleaning had to divide and conquer that weekend. Then the V Festival was followed in quick succession by the Creamfields and Leeds Festivals. August was rounded off by a local agricultural event, the Dualla Show.

September landed with a bang as Electric Picnic took place at the start of the month which was followed by the National Ploughing Championships at Screggan, Tullamore which was an site for the Ryans Cleaning team to clean. In fact, the National Ploughing Championships is the largest outdoor event in all of Europe. We also cleaned up at the exciting All-Ireland Finals at Croke Park which saw zero waste to landfill, a real achievement and the aim for all events going forward in accordance with the 20:20 Vision for Events.

Miss Saigon captivated audiences for a whopping six weeks at the Bord Gáis Energy Theatre and was a real treat for our team on the ground up there. Also in October, Ryans Cleaning began their inaugural Premiership Stadium Cleaning Contract for Watford FC at Vicarage Road. The Watford V Arsenal game on October 14th was a real milestone for Ryans Cleaning in the UK marketplace.

Our team enjoyed Queen and Adam Lambert play top hits to a sold-out crowd at the 3 Arena, one of the perks of the job for sure. Punchestown’s Winter Racing Festival included a race sponsorship by Ryans Cleaning and a great day was enjoyed by all in attendance as the first of the big jump racing kicked off for the season. Ryans Cleaning were also appointed new cleaning contractors at The Olympia and The Gaiety theatres.

Ryans Cleaning took on a new project at Dublin Zoo cleaning during their new attraction, the Wild Lights Festival which proved extremely popular on many a crisp evening throughout December. Our UK team kept Winterville at Clapham Common spotless throughout the entire event while our Irish teams cleaned Leopardstown, Limerick and Punchestown Racecourses and a long stint at the Bord Gáis Energy Theatre as The Sound of Music was their big Christmas show in December.