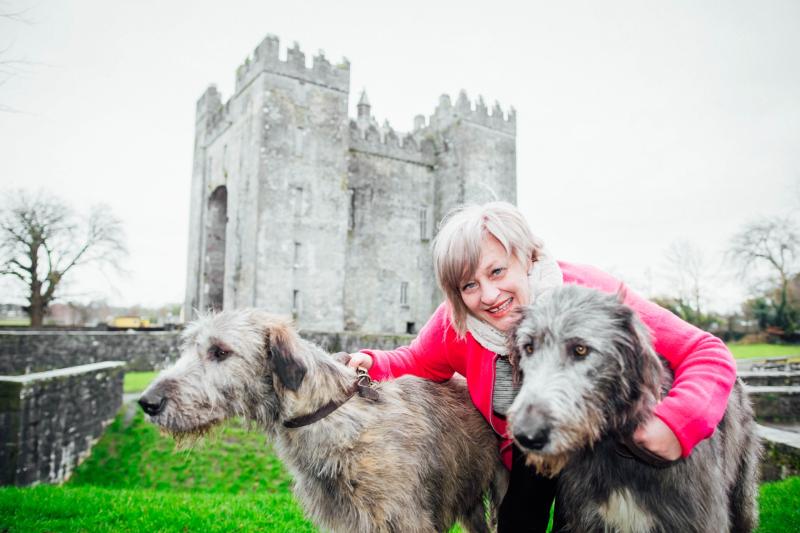 The names of two new female Irish Wolfhounds at Bunratty Castle and Folk Park, who gained fame with a television appearance on the Ray D’Arcy television show, have been revealed as Meabh and Saoirse.

Last month, Shannon Heritage ran a competition on its Facebook page where it invited members of the public to suggest names for the two wolfhounds. Charlotte Bond Cantillon, from Newport Co. Tipperary, was chosen as the lucky winner. Her suggestion of Meabh and Saoirse was chosen from over 1000 names. Charlotte recently visited Bunratty Castle and Folk Park to meet Meabh and Saoirse and to collect her prize of an annual family pass (two adults and two children) to Shannon Heritage attractions.

The competition to name the Irish wolfhounds received huge engagement online with a total of 243,761 reactions on the Shannon Heritage and Bunratty Castle Facebook pages alone and 417,000 positive international reactions from around the globe including the US, New Zealand, Australia and India. Some of the other names suggested included Thelma and Louise, Biddy and Miley and Yeats and Gregory.

Speaking about the competition, Niall O’Callaghan, Managing Director, Shannon Heritage said: “We are delighted with the huge response that we got for our competition to name our Irish wolfhounds. We’d like to thank everyone that took part in the competition. There was several great suggestions and it was difficult to pick a winner.

“Meabh and Saoirse have really made themselves at home at Bunratty Castle and Folk Park and are proving to be really popular with our visitors. No 15th century Castle is complete without these iconic and noble dogs and we are delighted to have them in what would have been their natural surroundings.”

Irish wolfhounds are known for being gentle, friendly and very intelligent, and they inhabited Ireland long before the arrival of Christianity and the written word. Known in Irish as ‘Cu Faoil’ denoting bravery, the Irish wolfhound is the stuff of legends.

Throughout history this tallest of dogs has been a warrior, a hunter, and a companion to nobility. Historically these dogs were used to hunt big game, such as wolf and elk, and they gained a reputation for unequalled valour. The Irish wolfhound even participated in battle, pulling men off horseback to be slain.

They have great size, power and speed, and an adult weighs about 100 pounds. Irish wolfhound adult males can attain the stature of a small pony. Despite their size, these shaggy-coated animals have a peaceful and quiet personality. They are affectionate and love to be with people.

Wolfhounds were regular guests at the Bunratty Castle from the early days of the medieval banquets in the 1960’s. The animals would roam the great hall and dining areas as would have been the custom in medieval times.